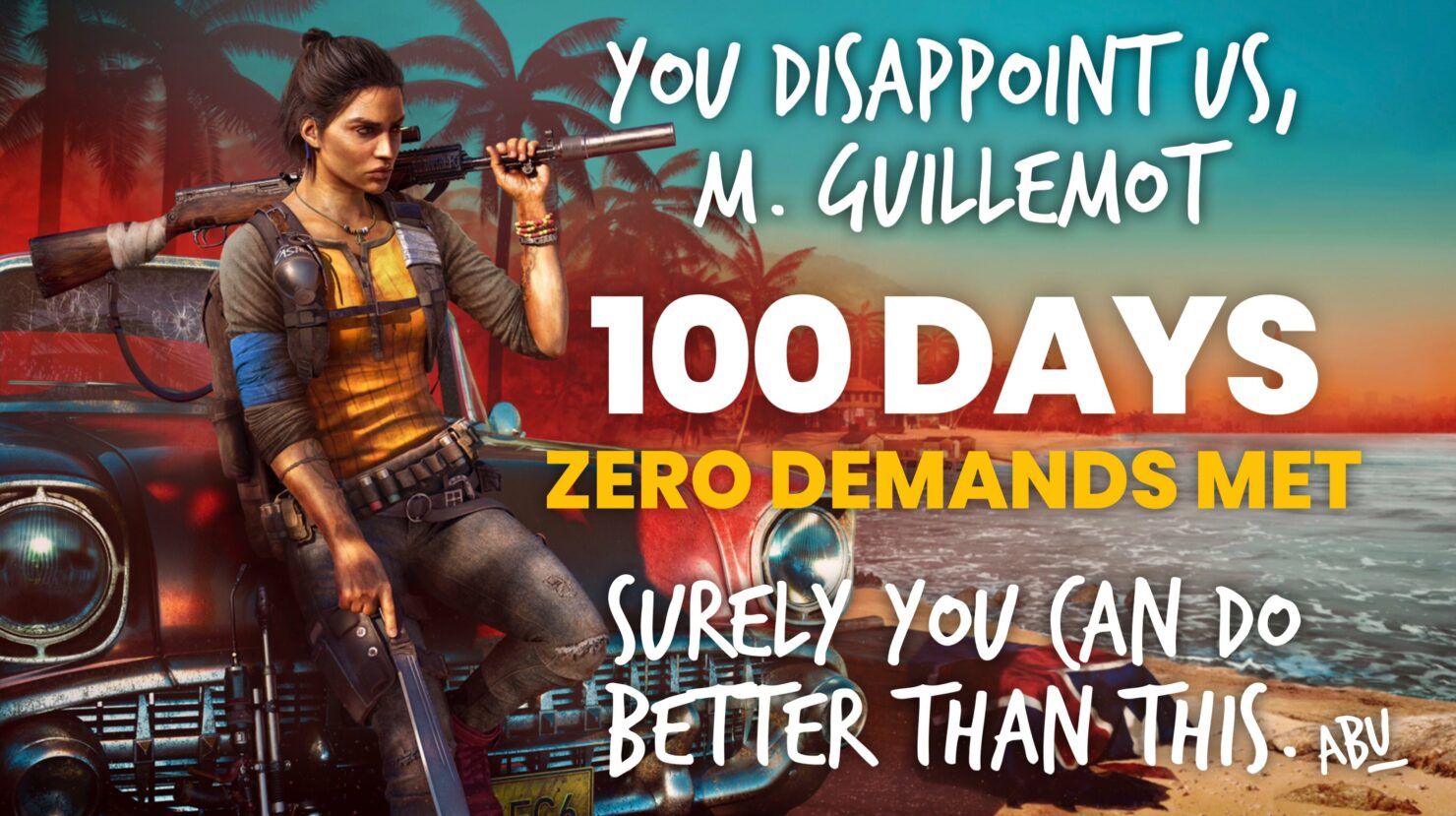 I would love to be surprised, even if only once. I would love to say that a multinational company worth billions has taken actions to clean up the utter shit that permeates through the very core of its culture. Sadly, we live in a world where being able to say this would be a surprise, and we live in a world where looking after the people that make your company billions is far too much effort for those on top. Yves Guillemot, and by extension Ubisoft, is a liar who chooses to protect abusers rather than those who make him money. 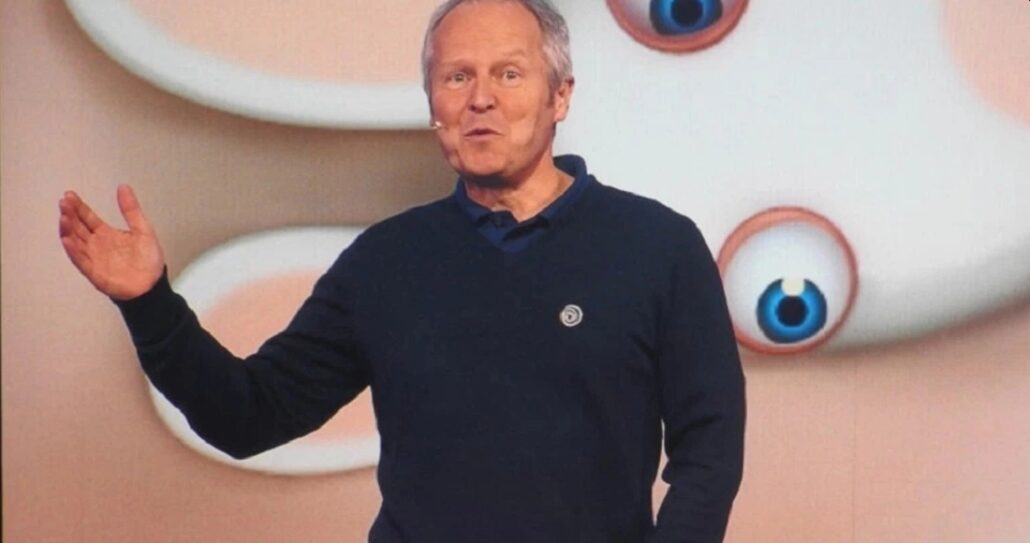 Am I right to call Yves Guillemot a liar and somebody who would prefer to protect abusers than the staff that make him millions? Well, it's undoubtedly treading a fine line, but I would say the facts are on my side. Seventeen months ago, Yves himself stated that he was committed to taking actions that would change the culture of Ubisoft for the better. This was followed by a survey revealing the extent of the toxic culture within Ubisoft, showing around 3,500 people had either witnessed or been victims of misconduct.

It is abuse on an industrial scale when one in four people are either victims of or witnesses of misconduct. Activision Blizzard, in a whirlwind of its own, from the reveal of the abhorrent toxic culture of the company, saw the release of a letter from Ubisoft employees in solidarity with the employees, and victims, of Activision Blizzard. This letter also highlighted that the promises from Yves Guillemot were empty.

This letter highlighted that most public abusers were sacrificed on the altar of PR. It's much like Bobby Kotick's recent PR Stunt, which is irrelevant as he netted $100m+ in bonuses after firing thousands while Activision was doing its best-ever figures. In Ubisoft? Other abusers were moved to another studio or even promoted, allowing the cycle of abuse to continue. Those who were allowed to resign, such as Serge Hascoët (who allegedly drugged people and was described as the most toxic person in the company), should have been unceremoniously fired but were not due to friendships with Yves Guillemot.

As for the letter by Ubisoft employees calling on the company, and Yves Guillemot, to stand by their words, you can find it below or on this tweet: 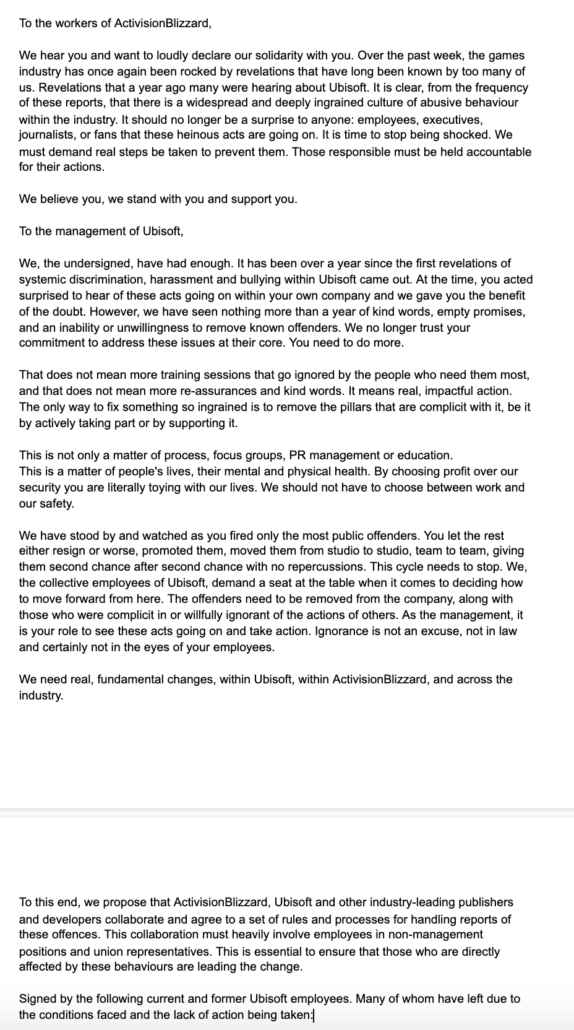 An email was sent out to all employees from higher up, telling them that they respected them. The employees responded with a specific set of demands. These demands included absurd requests like "stop promoting known offenders" and "give us a meaningful say in how the company moves forward". Now we come to the subject of this post; One hundred days after that original letter was published, nothing has changed.

100 days ago we signed our open letter and set out our four key demands. None of our demands have been met. So today we’re launching a new petition, open for ALL our supporters to sign https://forms.gle/Jx16pKUNgD9GdPDr9 Please sign and share!

All I can do is reiterate the request from Ubisoft employees that you sign and share their petition and possibly even start to vote with your money. It's hard because voting with your money inordinately impacts those already being abused, so this petition should be a good start. You may think signing it will show nothing, but it shows your support for the staff and your opposition to abuse. It also shows solidarity with staff who face this every day.

If it comes to the stage of not buying Ubisoft games, though, you're likely not going to miss out. When you do, you end up getting harassed by them, saying you're not playing or purchasing enough. I wouldn't think about reporting it though, Kotaku has published a piece showing that Ubisoft doesn't respond to harassment reports.