It's been seven months since the protracted drama between Vivendi and their attempted hostile takeover of Ubisoft. Since then, Ubisoft (EPA:UBI) has been performing admirably, despite any reservations I may personally have with their titles. As I reported on their first quarter, it was the best in Ubisoft's history. Going by today's report, the second quarter has continued this strong trajectory.

Net bookings for the second quarter came in at €364.6 million against a target of €345m and was also a 38% year on year increase. Net bookings for the six month period, March to September 30th, came in at €746.1m and marked a 60% YoY increase over last years €466.2m. Operating income from this has come in at €110.2m, a 3550% increase from last years €3.1m. This is based on non-IFRS (International Financial Reporting Standards) figures. 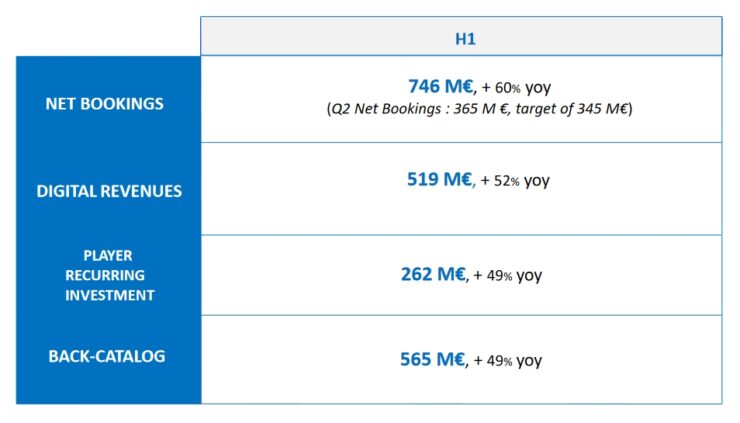 Ubisoft: Driving Figures All Around

There have been a number of driving factors behind this significant boost for the company. First and foremost comes from Assassin's Creed Odyssey. Although the title was officially launched during Q3, on the 2nd of October, a large portion of sales of digital revenues came from pre-purchases of the title. Yves Guillemot, CEO of Ubisoft, had this to say about the game:

The release of Assassin’s Creed Odyssey was successful. Community reception has been extremely favorable and player engagement rose once again, confirming the franchise’s entry among the very best RPGs.

All areas for the company have seen roughly 50% YoY growth, with two areas drastically helping to improve the profit margin of the company. These are the back catalogue, of which Ubisoft has a wealth of games that repeatedly feature in sales. Over the six month period, the back catalogue of titles accounted for €564.9m of net bookings, a YoY increase of 48.8%, and made up 75.7% of total bookings.

The other area is player recurring investment or PRI. This accounted for €262m, a 48.8% YoY increase. There is an overlap here with back catalogue titles as PRI accounts for in-game items, DLC (downloadable content), season passes, subscriptions and advertising. As a result, certain back catalogue titles also generate PRI. As PRI grows, it continues to feed into Ubisoft's plan.

As stated by Yves Guillemot:

The steady rise in player engagement is feeding our digital development and the quality of our games is enabling us to achieve top-rate performance.

Forward Thinking: A Strong Q3 and Beyond

Q3 has already started strong for Ubisoft with the launch of Assassins Creed Odyssey. The game has reportedly been well received by the audience and initial sales, within the first week, were higher than those of Origins and reportedly on track to become one of the best selling titles of the franchise. The current quarter will benefit from remaining sales of Odyssey that weren't allocated as pre-purchases during Q2, as well as the launch of Starlink: Battle for Atlas. 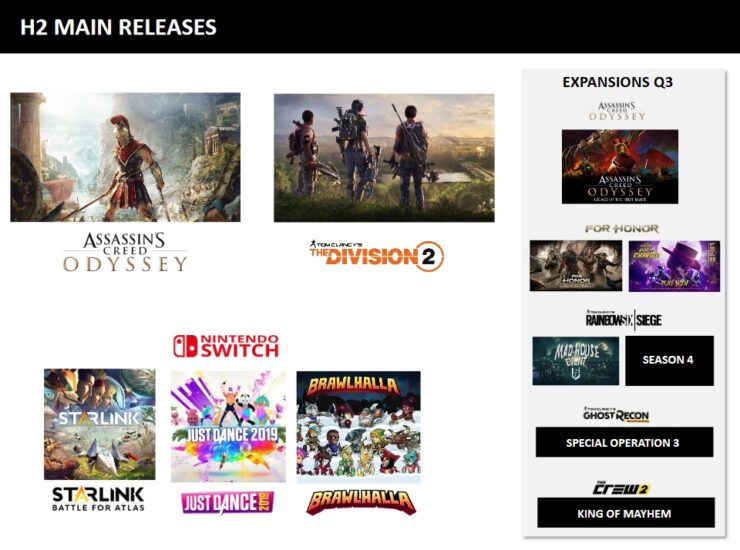 In addition to these two titles, a number of titles are in the works for the remainder of the financial year. One major title is The Division 2, which is likely to be another large seller for the company. Continuing the trend and to further PRI, expansions and additional content are in the works for Assassin's Creed Odyssey, Rainbow Six: Siege, For Honor and The Crew 2.

Despite beating the current quarters expectations, Ubisoft are still expecting the current financial year to finish with ales of roughly €2bn, with bookings of around €2.05bn. Non-IFRS operating income from this is expected to be around €440m. For the current quarter (Q3), net bookings are estimated to be around €600m - this would actually represent a YoY decline, though this is a result of early ship-ins of Assassin's Creed Odyssey and last years release of South Park: The Stick of Truth.