Ubisoft (EPA:UBI) are a company that is going from strength to strength. To a point, they are performing to a higher extent that even they believed they would. At the end of the last financial year I covered how the first quarter was expected to be down year-on-year (YoY), primarily due to a lack of new releases. As seen in Ubisoft's first quarter results, this has been the case but the company has still surpassed expectations.

For a while now we have covered the fact that the primary source of revenue for Ubisoft has come through Player Recurring Reinvestment (PRI). Essentially, PRI is the encompassing term for Downloadable Content, Season Passes, Subscriptions and advertising. PRI net bookings came in at €150.4m, a YoY increase of 19.5% and close to half of all net bookings for the quarter, up from 33% last year.

This is to be understood, however, knowing that Ubisoft only launched one new title within the quarter - Anno 1800. This, exclusively a PC title and one from a smaller genre, was never expected to perform up to the level of other titles. It is the company's other titles, released during the last financial year, that are performing beyond what was expected.

Assassin's Creed Odyssey has seen a large increase in player engagement, PRI and sell-through compared to that of the previous year's Assassin's Creed Origins. Rainbow Six Siege remains an ongoing success for the company, now being one of the industry's top-ten best-selling titles over the previous five years and has also seen an increase in player engagement and PRI YoY. Finally there is The Division 2, a title which Ubisoft claim to be the industry's biggest hit in the 2019 calendar year, based on units sold.

Ubisoft CEO and co-founder, Yves Guillemot, had this to say regarding the results:

Our first-quarter net bookings came in well above target, thanks to the very robust performance of our games ‒ notably Rainbow Six Siege and Assassin’s Creed Odyssey ‒ and a very strong increase in player recurring investment for PCs and consoles, led by record-high engagement levels per player.

One area of note is the division of sales for Ubisoft, particularly the increased share for PC. In the investors call, this was confirmed by Yves Guillemot as being partly due to the release of Anno 1800, a PC exclusive title. It was also stated that the game is performing well on the Epic Games Store, although no concrete figures were given.

On the future, it was expressed by Yves Guillemot that the increased share of net bookings by PC may remain to a higher level thanks to the newly announced uPlay+ subscription service. Also, on the topic of Google Stadia, it is said that the costs of getting games to work on the service is "not that high" and that the financial equation is in the company's favour. 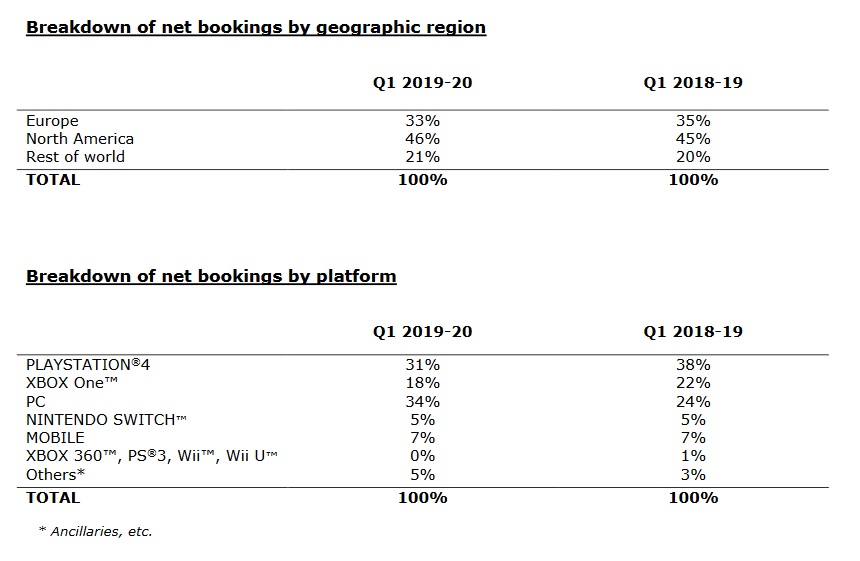 A Slow Burn to Culminate in Q4

One thing worth pointing out is that Ubisoft are likely going to see YoY falls in the next two quarters due to a limited run of releases. The only large title coming within Q2 and Q3 is Ghost Recon: Breakpoint, scheduled for October. Still, much like this first quarter, there is a high chance due to the nature of their games and constant expansion of titles like Rainbow Six Siege, the company will still surpass internal expectations. Particularly so as titles like For Honor and Rainbow Six Siege are scheduled to receive new content.

This will culminate in Q4 when, as covered within the Q4 results of 2018-19, the company has a number of large titles scheduled to release between January to March 2020, which are Watch Dogs: Legion, Gods & Monsters, Rainbow Six Quarantine and Roller Champions. These titles have also proven to be popular during E3 earlier this year, with Ghost Recon Breakpoint achieving the best sentiment score (fewest dislikes) of all E3 titles, Watch Dogs: Legion receiving 65 nominees or awards at E3 and Roller Champions being the most streamed game of the event. This all places the company and their games in a good position, with Yves Guillemot having this to say:

In the coming years, Ubisoft is ideally positioned to seize the many value creation opportunities that lie ahead and therefore to generate strong revenue growth and further increase its profitability.

Within the second quarter, Ubisoft are expecting net bookings of €310m, a roughly 15% YoY fall, with the company standing by full year targets of €2.185 billion in net bookings and operating income of €480 million.