Uber was granted the ability to depose Larry Page, CEO of Alphabet only last month. This was as part of the Waymo suit. After the release of a redacted transcript of the questioning, Uber requested a judge for more deposition time. The issue was that Page was apparently very unprepared as there were many ‘I don’t recall’ answers from his side.

Page is considered an ‘important witness’ by Uber’s lawyers and they were very disappointed when Page said ‘I don’t recall’ several times. They believe that Page’s lawyers didn’t refresh him with important details due to which the CEO was not able to recall specific trade secrets. Due to this issue, Uber is asking for two more hours of deposition time.

Considering the relationship between Page and Anthony Levandowski, the former was asked what he believed was Levandowski’s contribution. Page even called him, ‘kind of a grumpy person sometimes’ at one point.

Q When you say “implying that he could do a start-up,” what are the words that he used, if you can recall?
A Like, “I am sick of all these people.” I mean, I’m paraphrasing. But, you know, “I’m tired of dealing with all these people who don’t like me.” I mean, he’s kind of a grumpy person sometimes. And, you know, “Why don’t I just go do a company that does trucking? And everything will be fine.”

The now sacked head of Uber’s autonomous technology discussed starting his own trucking company with Page while still working for Uber. Page said that he was ‘not supportive’ as they would ‘clearly’ be in competition with Waymo. Page was not at all clear about what he had to say in response to the questions about how exactly he found out about the data theft or how Waymo came to sue Uber. He pointed out that the parent structure of Alphabet gives ‘bets’ a lot of autonomy. 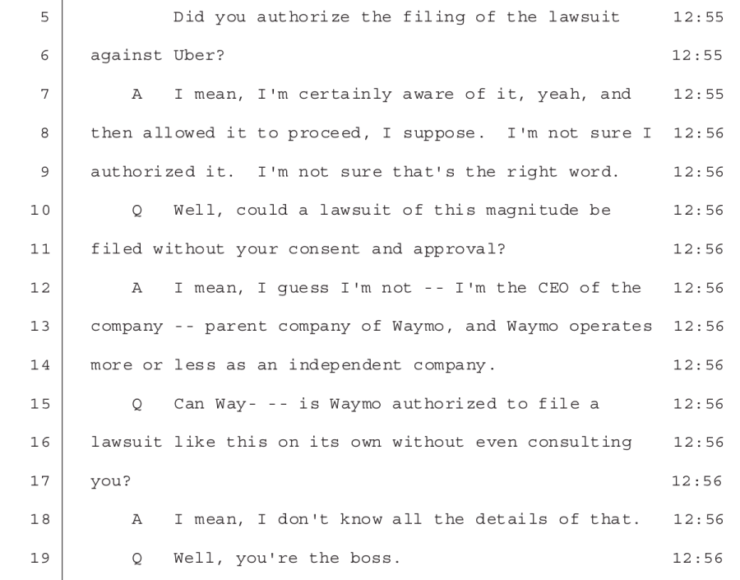