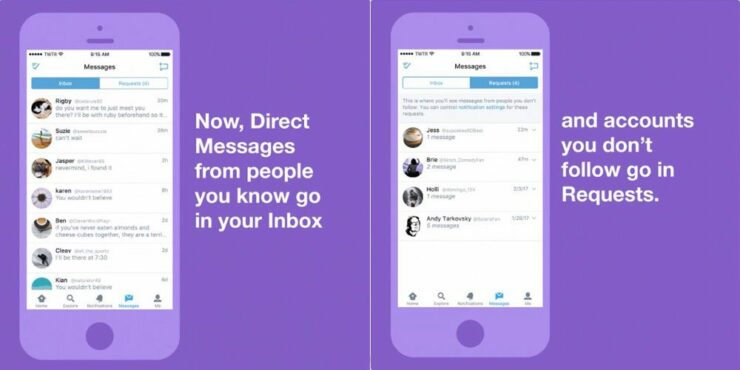 The official Twitter app used for iOS and Android just took a leaf out of Facebook’s book. Well at least this time it’s not Facebook adopting another social media’s feature. The feature adopted by Twitter will separate the messages from people you follow and people you don’t follow. This feature is being introduced with the help of a new inbox section and it will help users accept or delete unsolicited chats.

Yesterday the social media company tweeted on this matter and wrote, “If you’ve opted-in to get Direct Messages from anyone, messages from people you don’t follow will go into Requests in the Messages tab.” This feature will also filter the group chats to which you are added by people you aren’t following. Similar to what happens on Facebook, once you enter the chat section on Twitter, you will be asked to Accept or Delete the message. If you accept the chat or message, the chat will be shifted to your inbox and you can continue your conversation with the person or persons.

Another thing about this feature according to Twitter is, “Please note that they will not know you have seen the message until you have accepted their request.” All media will be hidden before the chat or message has been accepted. You can view media by accepting the chat or using the ‘View Media’ option. If you preview the media, you don’t have to worry; the sender will not be notified in any way. Prior to this Twitter followed a very different line of messaging. You had the option to accept messages from people you follow only or receive messages from anyone. From now on the direct messages will be filtered before they enter your inbox.

Twitter also tweeted a GIF about this new feature and a link alongside it to the support page entry. It is a great feature in my opinion. What do you think?