Twitter for iPad Is Getting a New Design With Multiple Columns

Twitter for iPad is finally getting a redesign that will take full advantage of the larger screen estate that the tablet offers. The app will get support for multiple columns to show more information on the screen at the same time.

So far, the Twitter app on iPhone and iPad has closely resembled each other as they have the same code base. Due to this codebase, the app looks ugly on the large iPad display. The company has finally figured out how to change this through this redesign.

If you use the new Twitter for Mac app, which was developed using Apple’s Mac Catalyst platform, the new Twitter redesign will seem instantly familiar. It seems that Twitter is back-porting the improvements it made to the Mac Twitter app, back to their iPad version. When the window for Twitter app on Mac is resized to a wide view, it looks exactly the same as the new screenshots from the iPad app, as shared by Applesfera. Everything from the profile page design, to trends and search placement on the right sidebar and even navigation menu on the left side, look the same. 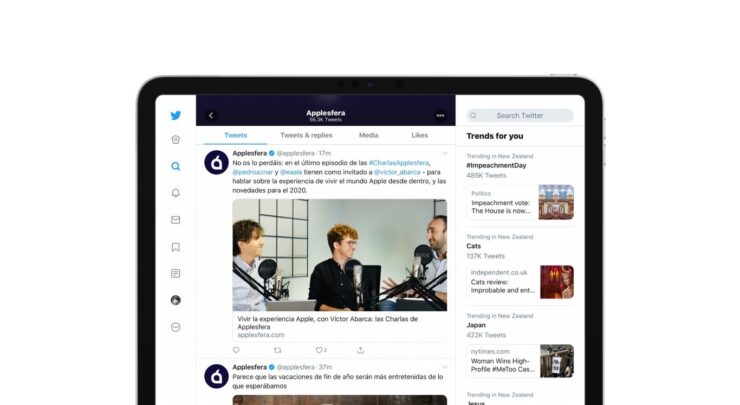 Project Catalyst was released as part of macOS Catalina 10.15 update to help developers port their iPad app codebase to Mac, with minimum effort. Support for converting touch gestures to mouse gestures, keyboard shortcuts, and drag and drop on desktop is built-in to Catalyst APIs. When Twitter had announced their app for macOS, they had shared their intention of maintaining feature parity between their iPadOS and macOS apps in the future.

Twitter has not officially announced this new design. The update is slowly rolling out to users and there’s no telling when it will be available to everyone. The company might be doing some A/B testing before they officially announce the roll-out for all users.

Despite the new design, Twitter is still not putting enough effort into their iPad app. None of these updates match the quality of work that Twitter put into their first ever Twitter app for iPad. That app had a unique user interface, built specifically for the large display. Because the company now focuses on re-using their web codebase as much as possible, we might never see such an app again from the company.