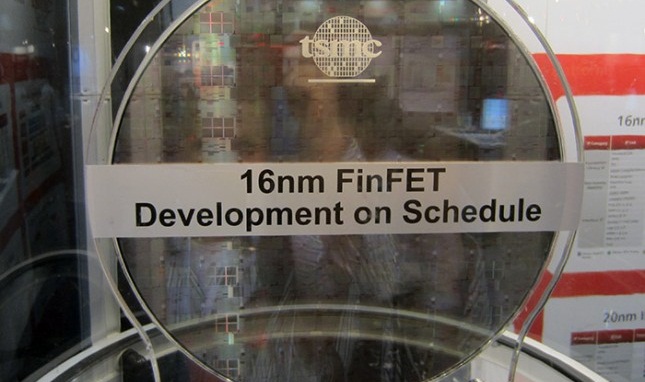 We exclusively told you three weeks ago that 16nm GPUs were delayed and that they will not make an appearance in 2015. Today this is public news as TSMC faces its second major 16nm FinFET delay. According to multiple reports, TSMC's most recent 16nm issues are serious enough that Qualcomm has decided to jump ship to Samsung instead. Who conveniently managed to drive up yield significantly only recently.

The company had originally scheduled 16nm FinFET mass production for Q1 2015. Mainly to satisfy Apple's A9 chip demands. However it fell short of meeting the original schedule and ended up moving volume 16nm production all the way to late Q2 early Q3. The company's new target was June/July of 2015 for 16nm FinFET.  And a quarter or two later for 16nm FinFET+. However now TSMC has reportedly postponed equipment installation from the first half of 2015 to the second half of 2015, pushing mass production deep into 2016.

TSMC's 16FF process is now an entire year behind the original schedule promised by the company. To make matters even worse Qualcomm has reportedly cancelled it's trial risk production at the Taiwanese fab due to the low capacity and poor yields. In turn Samsung has reduced pricing, increased production capacity and achieved a new yield breakthrough for its 14nm FinFET process. And this is what prompted Qualcomm to finally decide to jump ship.

This is great news for Globalfoundries, terrible news for TSMC. Because it means that not only can Samsung steal customers from TSMC but Globalfoundries will be able to do the same soon enough. Thanks to the 14nm FinFET partnership between Samsung and GloFo, yield learning is shared between the two via the copy-smart approach. Which means if one succeeds in pushing up yields the other will follow suit shortly afterwards.

This isn't particularly surprising for us as we had already told you four weeks ago that Samsung and GF had beaten TSMC to FinFETs. The timing is also important because Globalfoundries had already announced that it plans to begin volume production of 14nm FinFET products in the first quarter of 2015. Luckily the considerable yield "fix" that Samsung recently figured out means that GF can begin mass production with a solid baseline rather than having to start slowly like Samsung.

If you remember a month ago we reported that Nvidia is listed under TSMC's partners list for 16FF while AMD was suspiciously absent. On the GPU front this development means that AMD's decision to make FinFET GPUs at Globalfoundries will soon pay dividends. As the delays faced by TSMC will not affect AMD's schedule with Globalfoundries. We'll continue to follow this closely as it's interesting to see how this plays out and if it leads to any competitive advantage or disadvantage between AMD and Nvidia.