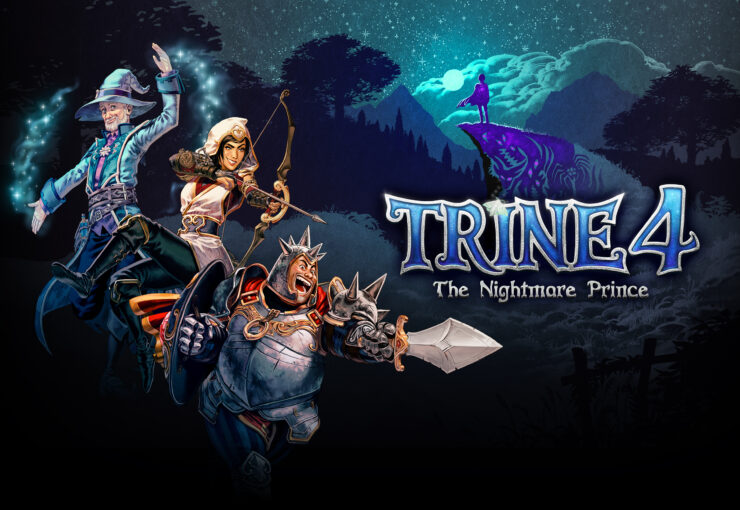 The Trine series is going back to its roots. Trine 3 attempted to expand into the realm of 3D, with limited success, but Trine 4: The Nightmare Prince focuses on the familiar 2D physics-based puzzle platforming of earlier entries in the series. At E3 2019 I got to watch a 20-minute-or-so demo, followed by a short hands-on session and walked away fairly confident that this will be a return to form for the series. 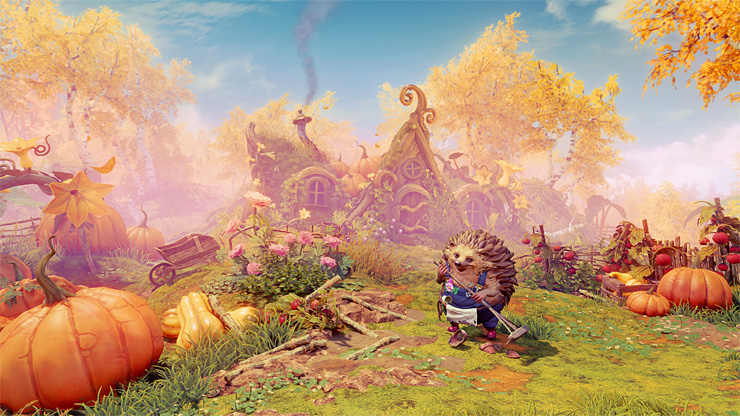 The hands-off demo showed off two areas – a golden-light-tinged birch grove (I liked this area a lot for obvious reasons) and a deeper, murkier forest area. Needless to say, both areas were as lushly detailed as you’d expect. As in the past, the game can be played co-op with up to four people, who can switch at will between Pontius the warrior, Amadeus the wizard, and Zoya the thief. Once again, most of the puzzles I saw revolved around summoning and levitating boxes with Amadeus, swinging with Zoya’s rope, and reflecting things with Pontius’ shield, although I did glimpse some new tweaks to these basic abilities. For instance, Pontius can now cast a spectral version of his shield, allowing him to double reflect water, light, and other things, and Zoya can now create rope bridges. Overall, it seems like the puzzles are more tightly-designed this time around, with less basic “just get up on that ledge however you want” stuff. 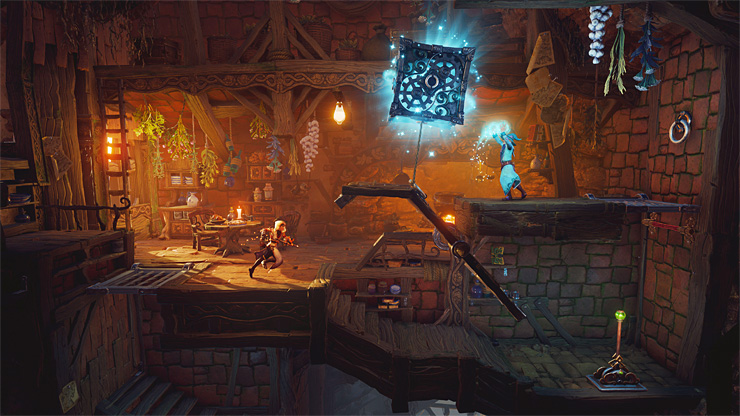 Combat also looks to be improved in Trine 4. In the past, there as a pretty clear division of labor – Zoya and Amadeus solved the puzzles, Pontius killed the bad guys, but the guys at Frozenbyte made a point of showing that the thief and wizard can hold their own now too, thanks to some new combat-friendly abilities. My hands-on time with Trine 4 was short, taking me through a tutorial area, culminating in a boss fight against a knight wielding a giant sword. I can confirm that combat and controls feel better this time around. Past Trine games had the tendency to be a bit finicky, as they focused on physics over precision platforming, but this latest game seems to nail both.

After going hands-on with Trine 4: The Nightmare Prince, I got a chance to sit down with Frozenbyte’s Kai Tuovinen who answered a handful of questions about what new features Trine 4 brings to the table, the game’s updated graphics engine, the possibility of DLC, and more…

The indie puzzle-platformer scene has become a lot more crowded since the first Trine was released. What does Trine 4 bring to the table to make it stand out amongst the increased competition?

Trine 4 has a great mixture of different types of physics-based gameplay and platforming, puzzles, and action elements. It's an intricate fairytale world crafted with a beautiful and distinct art style, combined with an amazing story told through numerous cutscenes, interactions with charming creatures, and funny dialogue between the characters. You also have the ability to play the game in single player or co-op locally or online with up to four players.

What kind of new abilities do Pontius, Amadeus, and Zoya have this time around?

There's a ton of cool new unlockable and upgradeable abilities for the heroes. For example, Pontius has a Dream Shield, a replica that he can leave in the air that can used to reflect things such as light and water, and he also has a Lightning Sword. Amadeus has the Horizontal Throw and Blink, both abilities that make him a real threat in battle now! Zoya has a roll she can use in fights to avoid enemy attacks and the Fairy Rope that levitates both objects and enemies if upgraded fully.

Can some favorite abilities from past games be used in new ways?

Definitely! For example, Zoya's rope can now be tied between two points in order to create a rope bridge.

You've said the combat has been improved -- what makes it better, exactly?

The heroes are better balanced, so you don't need to swap to the knight to have fun in battles. Both the wizard and thief are now quite formidable as well. We've also added more enemy types with some more tactical elements. For example, casters that need to be dealt with first as they provide immunity to others. The boss fights will also be very cool and require some thinking.

In past Trine games, it was often kind of easy to game the puzzles. Will that be the case here, or are the solutions more locked down?

There's a good mixture of both. We've got many open-ended puzzles where a huge number of solutions are possible, but also more of the stricter type of puzzles where specific abilities need to be used in order for you to succeed. You'll be swapping characters more often and will need to work together more in co-op. 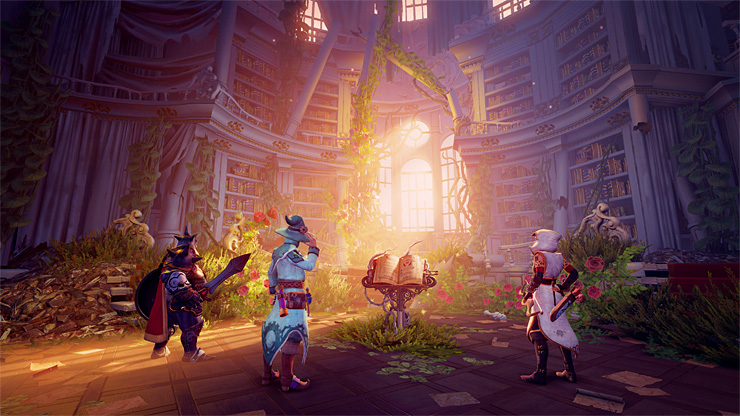 Trine 4 might be the most impressive-looking entry in the series to date. Trine games tend to be more about art design, but is there any new tech being used this time around? Have you considered using something like ray tracing?

We're now using a new version of our own engine and it's got a completely new renderer with lots of new tools and features for our artists to use. For example, physically-based rendering allows for more realistic lighting, and we're going to see a lot more cool-looking VFX applied throughout the game.

What resolution and frame rate is the game running at on consoles? What will players with high-end PCs be able to do?

We're still optimizing the game on all platforms, so we're not talking specific platform specs at this time. It's currently running well on all consoles and it looks great.

Trine 3 flirting with 3D platforming didn't work out so well, but have you ever considered a Trine game in a different genre? Perhaps an RPG or point 'n' click adventure?

Perhaps. We like to toy with different ideas for the franchise from time to time. Nine Parchments was a top-down spell-based shooter, and it was in the Trine universe, so we've done at least a spin-off of the series in a different genre. Time will tell if we decide to do more experiments.

We know Trine 4 is coming to a wide range of platforms -- is Google Stadia under consideration?

Stadia is quite interesting and we're always happy to include many platforms for our titles if they make sense. We'll see what happens!

Are there any plans for post-launch support? Trine 2 got a lot of quality DLC -- could we see something similar for Trine 4?

We do like to support our games with additional content after launch, so there's a good chance.

Frozenbyte has taken on a lot with two major simultaneous projects. How is the studio handling the load? How are you dividing resources between Trine 4 and Starbase?

We've got two major teams working on each project, so the division is pretty easy. There's a lot to do with Starbase and Trine on our plate, but we have amazing people working on both projects. We can't wait to show more of them!

Thanks for lettings us know about the game, Kai!

Trine 4: The Nightmare Prince jumps onto PC, Xbox One, PS4, and Nintendo Switch later this year.