Trials Fusion's upcoming DLC just got a very majestic gameplay trailer, showing off some of the new tracks with RedLynx, a cat riding a freaking unicorn. With a gun.

Trials Fusion Awesome Level MAX gets a sweet gameplay video, showing just how agile a cat riding a unicorn can be.

The new DLC is going to be available with a number of new things, including 30 new tracks, 7 garage items and of course many new items that you can use with the in-game track editor. The biggest new feature is the inclusion of a unicorn riding, gun-toting cat named RedLynx, a hero rider inspired by the 'Welcome to the Internet' meme designed by Jason Heuser.

Despite the obviously silly gameplay, who doesn't want to race around on a mighty fire-breathing unicorn galloping across obstacles with the speed and agility that only a mythical creature could have?

Ubisoft is also releasing an Awesome Max edition that includes the base game and all the DLC packs from the regular season pass along with this new DLC.

Trials Fusion Awesome Level MAX and the Awesome Max edition will be available on July 14th for PC, PlayStation 4 and of course the Xbox One. 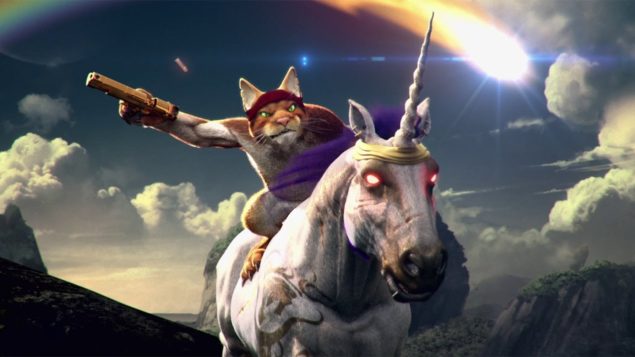