Spider silk is the most well known material, with the toughest properties around. Scientists have taken it to another level by spritzing spiders with water that contained carbon nanotubes and graphene flakes. The result of which was a 'super silk'. this super silk is one of the toughest material the world has ever known, which depicts toughness and strength beyond "anything that has been possible before," as MIT Technology Review reports. 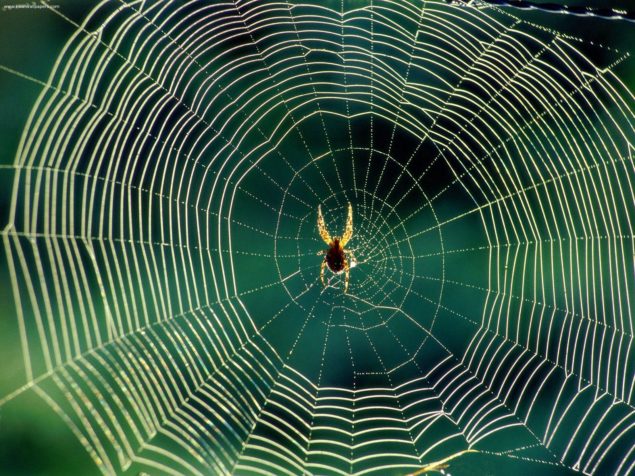 Spiders have the capacity to weave a fiber made of protein that is super strong and quite stretchy and in order to find out whether they can actually improve the nature of the material researchers in the University of Trento,Italy tried to make a stronger and longer lasting substance than what is presently available.

Pholcidae spiders, fifteen in number were taken from the italian countryside out of which five were sprayed with water containing graphene particles and the rest with water which contained carbon nanotubes. In order to check, they collected the spider's silk before and after the experiment took place. They had a thorough testing of its fracture strength and its young's modulus which exhibited the toughness of the material.

"For each strand of silk, they fixed the fibre between two C-shaped cardboard holders and placed it in a device that can measure the load on a fibre with a resolution of 15 nano-newtons and any fibre displacement with a resolution of 0.1 nanometres," MIT Technology Review explains.

Finally results exhibited that carbon materials were present in fine quantities, uniformly in all fibers.

The researchers seems still not sure about how graphene particles coupled with the carbon nanotubes are incorporated with the spiders web. Once the spiders silk spun takes place, silk is coated perfectly with the particles. But team actually analysed that the spiders had most likely ingested the water and then further spun it into the material during the process of its making.

"We have no direct evidence of this, but as the carbon nanotube or graphene is within the bulk of the silk and not just coating the surface, I suspect that it was incorporated during the spinning," Nicola Pugno, one of the researchers, told Emiko Jozuka over at Motherboard.

The researchers also believe that things can go even better if they can find a way to replicate and produce the material in a group which can be further used to make materials having better characteristics including more strength and flexibility and also the capability of being conductive.

According to the MIT Technology Review Reports:

There are challenges ahead, of course. Nobody has discovered an efficient way to harvest spider silk, although not for lack of trying. So an important future step will be the development of such a technique that can work on an industrial scale. That would open the way to widespread applications in everything from tissue repair to garment design.

The team also wishes to expand their finding in the category containing silkworms and they are expected to start working on this pretty soon.