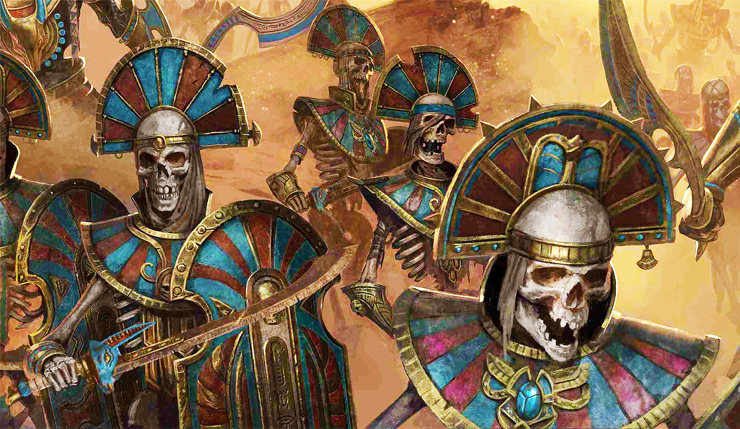 “Across the arid deserts of Nehekhara, vast legions of skeletal warriors rise from beneath the baking sands to slaughter those who trespass into their domain. It is a lifeless realm of endless dunes, stained red from the blood of savages and barbarians. This is the Land of the Dead, where mummified kings are cursed to rule in perpetual unlife. But it was not always thus.

There was a time when the ancient kingdom of Nehekhara stood as a crown of human civilization. A golden age when its cities shone with majestic splendor, its armies conquered entire nations and its kings ruled as gods among men. But this realm was razed millennia ago by the treacherous sorcery of the reviled Nagash -- in a stroke, the living perished, and the dead rose from their tombs. Death is no barrier to glory for the Tomb Kings however. In unlife, they will see the empire of Nehekhara restored to greatness!”

The Tomb Kings have different objectives and mechanics than the game’s other races. Your goal is to collect special legendary tomes, which will eventually allow you to upgrade your armies. You’ll also be able to resurrect soldier en masse once enough of them fall. You can get a better sense of how the Tomb Kings work from the video, below.

Rise of the Tomb Kings is available today (January 23) for $19. In addition to the paid DLC, Total War: Warhammer II will be releasing a new Skaven legendary lord, Tretch Craventail, for free.