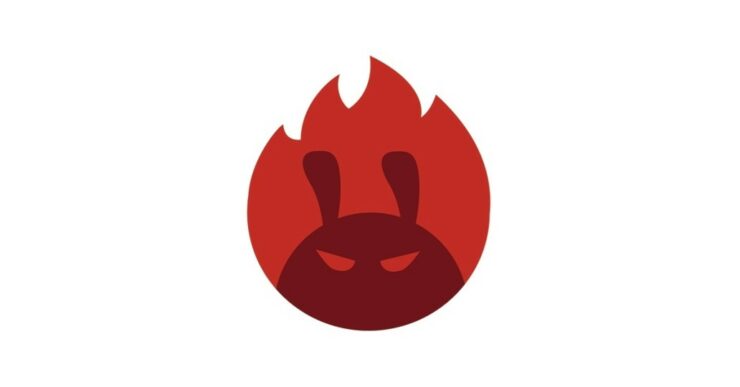 No smartphone review is complete without running it through the AnTuTu benchmarking software. Every month, the company releases a list of top ten performers across several categories. The results are based on the average scores for each phone and performed on AnTuTu V8. Let's take a look at which devices made it to the top ten. 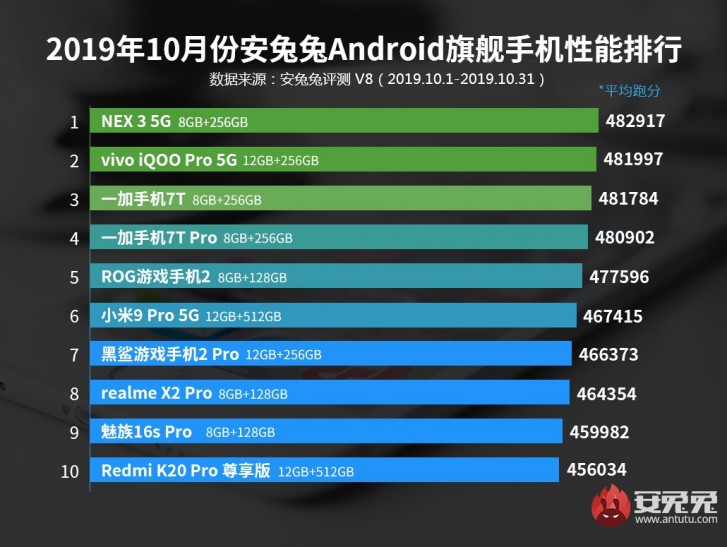 Surprisingly, the top two positions belong to Vivo. On the very top is Vivo's Nex 3 5G with its 482,917 scores followed by the Vivo iQOO Pro 5G with 481,997. AnTuTu says that both devices get an edge over the competition due to them running UFS 3.0 flash memory. Additionally, both phones are equipped with Turbo Write, HPB technology, and are complemented by the F2FS file system and Monster Enhanced technology, resulting in faster read-write speeds.

OnePlus takes the third and fourth spots with the OnePlus 7T and OnePlus 7T Pro, followed by the ASUS ROG Phone 2 in fifth place. The remaining phones that have made to the list are Xiaomi Mi 9 Pro 5G, Xiaomi Black Shark 2 Pro, Realme X2 Pro, Meizu 16s Pro, and Redmi K20 Pro Exclusive Edition. All the above devices are powered by the Qualcomm Snapdragon 855+ SoC, which is hardly surprising, considering that it is the best silicon that the company has to offer at the moment. 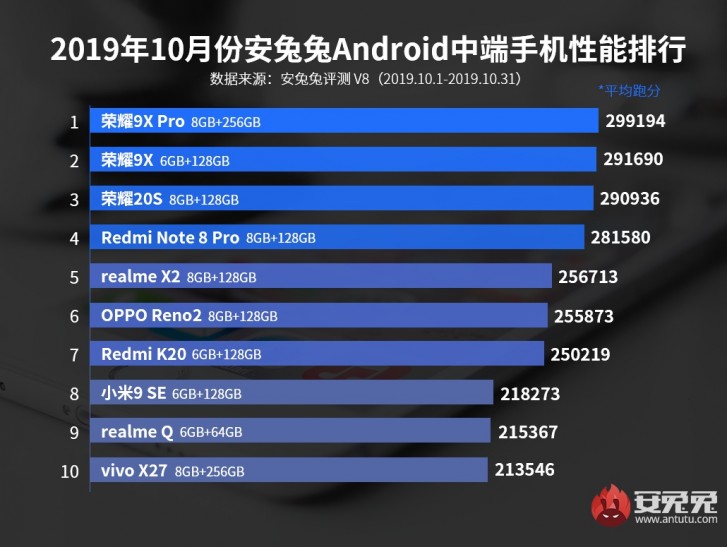 Unlike the high-end segment devices which were powered by the same Snapdragon 855+ SoC, the mid-range segment has a lot more variety. The top three positions are all snagged by Honor devices running the Kirin 810 SoC. On the top is the Honor 9X Pro, followed by the Honor 9X and the Honor 20S with scores of 299194, 291690, and 290936 respectively. AnTuTu says that the Honor 9X Pro won on account of its liquid cooling.

The Redmi Note 8 Pro takes the fourth place with an average score of 281580 and is the first time a MediaTek SoC makes an appearance in the list. Its MediaTek Helio G90T chip has built-in copper tube liquid cooling solution outperforms the Snapdragon 730G and puts the Redmi Note 8 Pro above others.

Further down, there's the Realme X2 followed by the OPPO Reno 2 and the Redmi K20— all of which run Snapdragon 730G/73 chips. The last three slots are occupied by the Xiaomi 9 SE, the Realme Q, and Vivo X27.