Rumors have been making the rounds at the skatepark for a while, but now it’s finally official – the Tony Hawk franchise is coming back. Yes, just minutes ago, the Geoff-Keighley-produced Summer Game Fest kicked off with the announcement of Tony Hawk’s Pro Skater 1 and 2! This new remaster will include all the maps, skaters, and all the late-90s-era tunes you remember, along with new stuff like spiffy 4K visuals and original online modes. Check out the first trailer for Tony Hawk’s big return, below.

The remaster will also feature all the original levels from the first two games in the franchise, from the Warehouse to The Bullring, as well as many of the songs from the original games to amp you up while you go for that Sick Score. Those levels can be played solo with goals old and new, with a buddy for local co-op, or online with original multiplayer game modes. All of this will be presented in stunning 4K resolution with updated and enhanced graphics, running at a frame rate crisper than a perfect 50-50 grind: 60 FPS.

Rather carve up your own park with a skater you created? Create-A-Skater and Create-A-Park are back with some dope features added in. Create-A-Park will feature a robust editing suite, enabling an incredible level of customization to create the skate park of your wildest imaginations. These parks can be shared online with friends.

After you create a park, why not create yourself – or a friend… or one gnarly looking poser – in Create-A-Skater? With plenty of customization options, including some that feature iconic skating and street brands, you’ll be able to express a crazy amount of creativity just in your custom skater alone.

Of course, an array of Tony Hawk’s Pro Skater 1 and 2 packages will be offered, including the standard edition for $40, the Digital Deluxe edition for $50, and the Limited-Edition Birdhouse Deck edition, which includes an actual skateboard deck – no word on what that will cost yet. There will also be no microtransactions in the game, at least not at launch – that may change down the road. 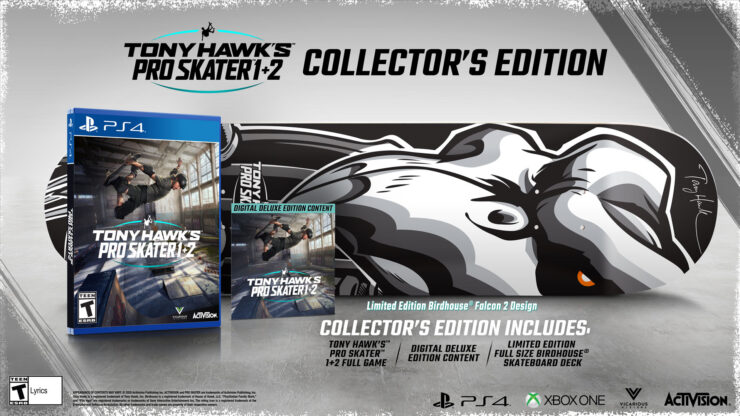 Tony Hawk’s Pro Skater 1 and 2 rolls onto PC (via the Epic Games Store), Xbox One, and PS4 on September 4. Those who pre-order will get access to a demo set in the classic Warehouse state sometime before launch.