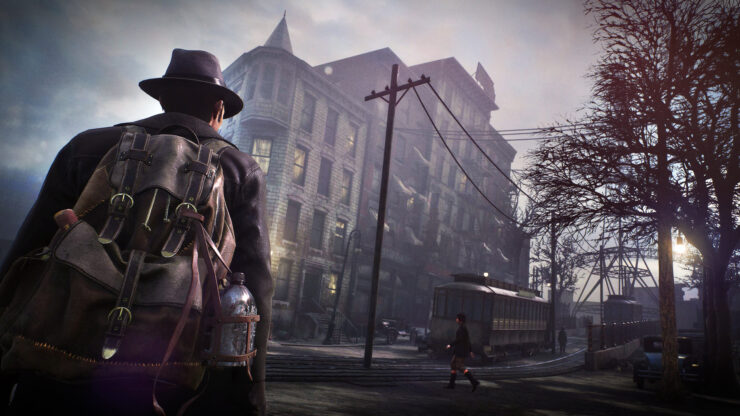 The Sinking City has been in development for quite some time, having been delayed a couple of time to make sure that it is as good as Lovecraft fans expect. The game is now very close to release, and Frogwares and Bigben Interactive showed it during this year's E3.

During the event, we managed to catch up with Frogwares' Sergey Oganesyan and talk about the inspiration behind the game, post-release plans, the recently announced Nintendo Switch version, Google Stadia, and next-generation consoles.

The Sinking City is out June 25th on PC (Epic Games Store), PlayStation 4 and Xbox One.

(Interview has been edited for clarity)

Q: How did you come up with the idea of an investigation game set in the Lovecraft universe?

A: The Sinking City actually started as a prototype for a Sherlock Holmes games, but eventually changed to a game set in the Lovecraft universe as there was a lot of stuff that we couldn't do with Sherlock Holmes. The Lovecraft universe also fits an investigation game well, because all of his novels are usually about people searching for something, like the truth behind certain events. Sometimes, the characters from his novels are detectives as well, so we said: "hey, you know, why not?". It's a really cool setting that presents some awesome themes like fear of the unknown, cosmic fears, the insignificance of man before all this, which are all things we could actually use.

Q: You mentioned the Sherlock Holmes games. How much did they influence the mechanics of The Sinking City?

A: Some of them are coming from our Sherlock Holmes games, but not all of them. We obviously used the experience from our previous games, but also introduced some new elements, as the Sherlock Holmes games are pure adventure games, while The Sinking City is not. Being an action adventure, it features a mix of already seen features and brand new ones, like the Retro Cognition mechanics, the Mind's Eye mechanics and of course shooting mechanics.

Q: Combat is among the new elements added to The Sinking City that was not found in the Sherlock Holmes games. How important is combat in the game, and could you avoid it completely if you wanted to?

A: You cannot avoid combat completely, as it actually is a part of the city setting that's really dangerous and so we do give you the tools to defend yourself. The Sinking City is a detective game, however, so the focus is on investigation, although combat is not uncommon. There are different kinds of enemies and monsters with different abilities, different types of ammo, different weapons. There isn't a lot of ammo, though, so you may want to save it for the most important battles.

Q: So, there are boss battles in the game?

Q: The Sinking City is an open world game. How difficult has it been to develop an investigation game in a much bigger setting?

A: The game is a heavily story-driven game, so it's not an open world sandbox game where you can go fishing, or you can go have a drink with your buddies, nothing like that. Still, it's been definitely challenging because we needed to make sure that players don't get lost. For this reason, we put hints in every part of the city to make it easy to put clues and conclusions together. It's in the evidence, you can just analyze it and you will get figure out where to go next.

Q: Are there multiple ways to complete missions?

A: There are linear and nonlinear parts in each quest. You reconstruct the trail to find out who committed a crime, but at the same time it's possible to gather different pieces of information, which can be optional, that give a better understanding of what's going on, and why somebody did something. There are also moral choices in almost every quest, and some of them will have consequences. Getting a better understanding of the motives may make you sympathize more with a character rather than another.

Q: Are there multiple endings?

Q: Are some of them glorified Game Over screens in case you fail some quest, or are they real endings?

A: I don't think you're gonna fail. This is not the type of game where you can fail, you can obviously make bad choices, and they will have bad consequences. I don't think we have glorified game overs. But at the same time, we need to understand that this Lovecraft, danger is always right down the corner, and there isn't always a good ending.

A: The Sinking City is an old school single player experience. There is a couple of cosmetic DLC like costumes, and a couple of requests for different editions, but there are no plans for post-launch DLC at this time.

Q: So, no expansions?

A: Never say never. At this point, we don't know. I don't think we have any plans for that.

Q: The game is also coming to Nintendo Switch, right?

A: Yes, we just announced it.

Q: The console is not as powerful as the PlayStation 4 and Xbox One. How challenging it is to port the game over?

A: We are still developing this version of the game. But we know we have to make certain compromises. Because, first of all, it's a new platform for us, and there is a learning curve. We are reducing the number of polygons for character models, but in a way that it is not noticeable. There will be other compromises, but we still cannot say, as we are still working on it.

Q: Plans for the future after The Sinking City? A new Sherlock Holmes game?

A: We have released Sherlock Holmes games, and I'm not sure we are going to stop. To be honest, I'm sure another will be released someday, but it will be a different game from what we have done before. It will probably have some action elements, but I'm not sure if there will be combat. And it will probably be open world, as beautiful aesthetics and art direction are big attractions for the players, like whenever they look at the world and say" Oh, it's beautiful". Maybe we want to do something like this again.

Q: The Sinking City is coming on the Epic Games Store on PC. Did you get any backlash for this decision?

Q: Thoughts on Google Stadia? Anything you could do on the system that is not possible on a traditional gaming system?

A: Stadia has just been announced, so we're still looking at the platform. I personally think it's really cool, and I like the simple streaming option that doesn't force you to download anything. We don't have any plans to release The Sinking City on Stadia, but we may consider that later.

Q: There is very little known about next-generation consoles. Is there any feature that you are informed about that could improve your games or anything you are excited about?

A: Loading times is one thing. Sony showed their new SSD and loading comparison times, and it's like 10 times faster on the next PlayStation console. So, we are excited about that, because we developed an open world game and, as you can imagine, it takes up a lot of memory and a lot of resources. They are generally going to be more powerful, so this is great. We might consider releasing updated versions of our previous games on next-generation consoles.