[Update] IGN and  Eurogamer have both released videos of the life-size Trico (Catweagle) from Sony's Booth at the Tokyo Game Show, which can be viewed below:

The Last Guardian was finally, officially re-revealed to be coming exclusively to the PlayStation 4 at E3 2015 with a 2016 release date. genDesign, the studio behind The Last Guardian, reported that they will be bringing The Last Guardian creature, Trico, to the Tokyo Game Show in “a new and different way”. 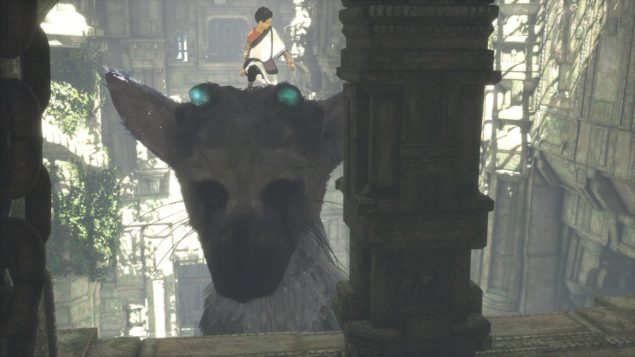 It appears that at the Sony Booth of the Tokyo Game Show, attendees will be able to communicate with a life-size version of Trico, being projected on a giant screen, using the same AI as in the game.

The Last Guardian centers around a young boy, who must navigate a complex environment of ruins with the aid of Trico, a giant griffin-like creature. Encountering occasional enemies, which can be avoided with some sneakily clever maneuvering, or be dealt with head on. The creature can be mounted, in similar fashion to Shadow of the Colossus. In addition to its speed the creature is capable of swimming and climbing up walls.

After discovering the mysterious creature, the boy forms a deep and unbreakable bond with it, and the pair must rely on each other to overcome the treacherous ruins. The Last Guardian offers players the chance to experience the journey of a lifetime in a touching, emotional story of friendship and trust.

An Unlikely Companion: Discover a fantastical beast named Trico who will act as companion and protector, forging a bond that drives an emotional and harrowing journey.
Truly Unique Gameplay: Take control of an ordinary young boy who must communicate with his gigantic companion in order to overcome obstacles and survive mysterious dangers.
A Beautiful Fantasy World: Through advanced lighting and particle effects, detailed environments, and lifelike character animation, The Last Guardian transports players to a breathtaking world filled with crumbling ruins and mysterious secrets to discover.

The Last Guardian will be making its way exclusively to the PlayStation 4 in 2016. We will bring you any new information as soon as it becomes available.