We know for a fact that the Galaxy S23 Ultra is happening really soon, and the phone will be launching sometime next year. So far, we have heard a number of details about the upcoming smartphone, and today, the entirety of the upcoming flagship has passed through China's regulatory agency 3C.

This means that Samsung has decided to move ahead with the Galaxy S23 Ultra's development and the phone has received approval from 3C. The application popped up on Chinese social media Weibo and while it does not reveal much about the phone, we do know that it will have an SM-S918 model number, and the regulatory even tested the device using a 25W EP-TA800 wall charger.

In addition to that, the 3C application has also confirmed that the Galaxy S23 Ultra has been manufactured in  Thai Nguyen, Vietnam. This should not be a surprise considering how Samsung is known to manufacture most of the smartphones in Vietnam where the company manages to reach an annual capacity of 1200 million units. 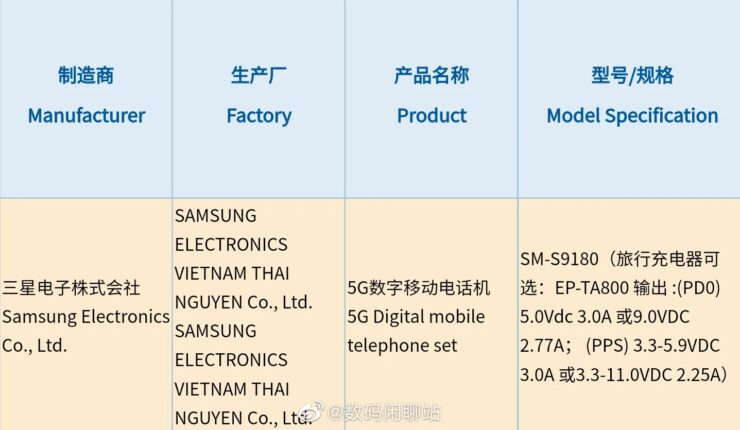 As far as the mentioned charger is concerned, it still does not say anything about the battery capacity of the phone. We do know that the phone is not going to ship with a charger in the box.

However, Samsung seems to be working on a new Charging Hub that will allow for better wireless charging and we might be seeing that at the next Galaxy Unpacked event where the company is also set to unveil a bunch of devices including the Galaxy S23 Ultra.

Samsung Delays Its Upcoming Flagship Tablet Launch, the Galaxy Tab S9, to Next Year Due to Economic Uncertainty