Taiwan Semiconductor Manufacturing Company TPE:2330 announced last week that it is willing to build a new fab in Arizona. This wouldn’t be the first facility the company has in the United States, but is notable considering the tech cold war and the state of silicon relations. There are questions as to if the fab will be commercially viable when it opens in the early 2020s, given the process node and slim capacity of the facility, but the US wanted more semiconductor manufacturing capacity in its backyard and it got its wish.

How did such a facility come about to reside in the Copper State? A deal of such magnitude would almost always involve lawmakers in Phoenix as a stakeholder at the table. But TSMC has yet to disclose the terms of the agreement with Arizona and the White House — which has language that’s limited to “willingness” versus a commitment. Nina Kao, TSMC’s assistant spokesperson, is quoted as saying that opening up shop in Arizona provides “investment options” but such options have yet to be quantified.

Details on whatever discussions the company had in Phoenix might not leave the halls of the Capitol building. In a move that might make Mises or Rand blush, in 2011 the state effectively privatized its Department of Commerce turning it into the Arizona Commerce Authority, which lacks the same oversight as a fully-public department of the state government. According to the Arizona Capitol Times’ coverage, it doesn’t have the same financial reporting requirements as most of the state’s departments, its personnel aren’t state employees, and it also had its own outside legal counsel. 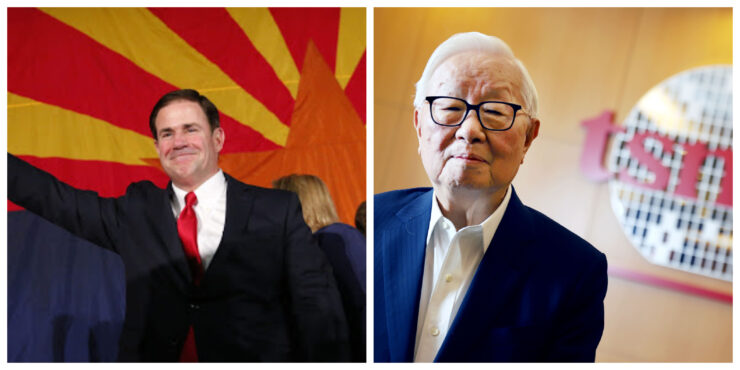 The Arizona Public Interest Research Group has criticized the ACA’s transparency practices, particularly with regard to the use of taxpayer money for subsidies and incentives directed towards companies.

Queries of OpenBooks, an Arizona state-run website that tracks government spending, had no records of any dealings or subsidies distributed to TSMC.

As the EE Times points out in a recent piece, the deal had a strong political angle to it within Washington.  Sources that spoke to EE Times said that if TSMC helped in the asphyxiation of Huawei, restricting its sales of silicon to the Chinese giant to low-end handsets (and not 5G, AI, or servers), it would get some breathing room from the Department of Commerce and assistance with the capital required for the US fab.

No doubt there was one war-gamed alternate-future scenario where leadership in Taipei friendly to Beijing encourage more cross-strait trade (in a similar vein to former Taiwan President Ma Ying-jeou, who’s China-friendly KMT opened up new doors for Taiwan in China) and a rogue TSMC drifts towards China incentivized with lucrative contracts in exchange for restricting supply to key US industries like defence. Dissuading TSMC from going too far, and bringing it back away from China via punitive export administration regulations from the Commerce Department’s Bureau of Industry and Security would be a very real thing in this timeline. So promises that such restrictions would never be placed on the company should it resist entering Beijing's orbit would be a very welcome deal for the company.

Although sources that spoke with EE Times argue that the move to put TSMC’s fab in Arizona comes down to rewarding a stalwart Republican state, it’s more to do with the fact that Arizona’s lack of a culture of transparency would allow for a face-saving move should the project become a white elephant like Foxconn’s TPE:2354 operations in Wisconsin.

Foxconn’s planned LCD factory in Wisconsin broke ground after a $4.1 billion subsidy, but despite the scale of investment its buildings still are empty and local stakeholders call it a ‘bait and switch'. For Foxconn, it’s the cards it was dealt: the deal offered by Wisconsin was too good to pass up, despite the market already being oversupplied with LCD panels. The company had to do something with the facility considering the cash deployed by both the state and Foxconn itself, so it settled on an “AI 8K+5G” center of excellence — whatever that means.

If TSMC’s fab in Arizona has the same fate — which by all means it likely won’t — there will be a lot less embarrassment to go around as the value of incentives provided by lawmakers in Phoenix remains a secret. That’s an advantage only Arizona has given its secrecy laws; its Failing Grade from the National Freedom of Information Coalition’s annual report is a testament to this. Not coincidentally it also ranks near the bottom of the Coalition for Integrity's ranking of corruption at the state level with a score of 28%. In contrast, Washington and California, other logical contenders for the facility as they are home to many other fabs, come out on top, with scores of 78% and 75%, respectively.