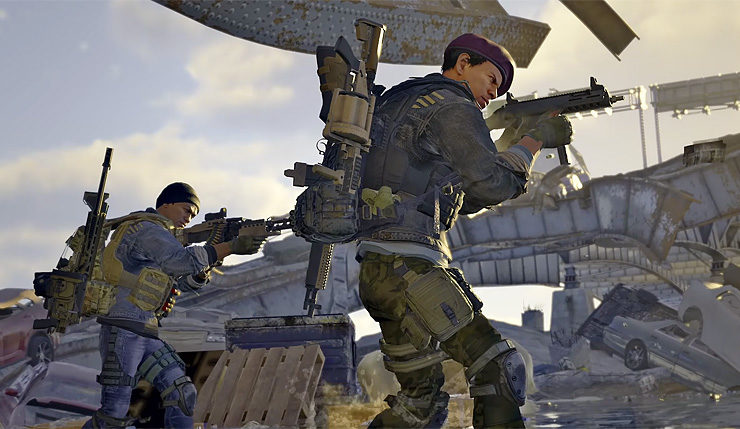 With launch just a couple months away, Ubisoft has begun to pull the curtain back on Tom Clancy’s The Division 2 – yesterday we got a peek at the game’s story and learned when the private beta drops, and now we’ve got new details about PvP. As in the previous game, The Division 2 will have Dark Zones, open PvP areas where players can team up to fight enemies or take each other down, if they'd prefer. This time around, there will actually be three Dark Zones to explore, each with their own look and feel.

The Division 2 will also include Conflict, Ubisoft’s name for the game’s collection of organized PvP modes. Conflict matches are 4v4, come in Domination and Skirmish variants, and take place on a series of three standalone maps. Check out both the new Dark Zones and Conflict mode, below.

Keep on scrolling for some additional The Division 2 PvP footage, and full Dark Zone details courtesy of Ubisoft.

The most notable change coming in the sequel is the introduction of three Dark Zones, each delivering a unique narrative and fostering new playstyles:

With three new Dark Zones also comes improvements to server capacity and overall size. In The Division 2, we created smaller chunks of Dark Zone for a maximum of 12 players at any given time. While we reduced the maximum player capacity by half for The Division 2, we reduced the overall size of the Dark Zone by thirds to increase player density. The quality of your encounters in the Dark Zones are improved, making your experience more fulfilling.

We are excited about a few big changes coming to extractions in The Division 2. While loot was static from the moment it dropped in The Division, it takes on a more dynamic role this time around. Firstly, only the rarer and more scarce gear upgrades found in the Dark Zones will be contaminated and require an extraction. The rest will flow straight into your inventory. Secondly, weapons and gear roll at the power level of the player who successfully extracts them. Contaminated gear is your best chance at finding upgrades within the Dark Zone.

The three Dark Zones in Washington D.C. will utilize normalization to level the player field. If you are new to The Division 2, normalization reduces the peaks and valleys between players who have high survivability or high damage output. While balancing is a factor to take in account when crafting your build, remember that your build choices are still unique and offer a variety of gameplay options. AI are not exempt from normalization either -- they adhere to the same normalization rules players do.

We are introducing dynamic, server-wide events called Occupied Dark Zones. During these events, all expected Dark Zone rules change. The concept of SHD and Rogue are completely gone; you are simply a player trying to reap the best rewards in our most hardcore environment. This translates to no Rogue states, a limited notification system, friendly fire active, and no normalization, allowing you to utilize every ounce of your build.

Eager to give The Division 2 a try? The game’s private beta runs from February 7 to February 11. Those who have pre-ordered are automatically eligible, although those who haven’t can still register for the beta here. The beta will be available on all platforms – no word yet on what the beta will include, although it seems likely you’ll get to try out a fairly meaty chunk of the game.