Bitcoin (BTC), the inarguable leader of the entire crypto space, continues to move in tandem with the US equities in a troubling manifestation of a persistently high correlation between the two seemingly unrelated assets.

It is commonly assumed that the ever-growing altcoin space generally follows Bitcoin's price cues. However, Dogecoin (DOGE) recently emerged as a rare outlier to this narrative, clocking in outsized gains on the back of Elon Musk's chess-like moves.

Year-to-date, Bitcoin is down around 5 percent, while Dogecoin is down over 7 percent. In the past month, however, Bitcoin has registered gains of around 17 percent, while Dogecoin is up over 33 percent. Of course, a sizable portion of Dogecoin's 1-month gains resulted when Elon Musk, the CEO of Tesla and a committed supporter of DOGE, disclosed a 9.2 percent passive stake in Twitter, unleashing a fierce rally in the stock on Monday. Musk's involvement in Twitter is expected to prompt more conducive policy changes at the social media company, thereby improving its overall profitability outlook.

But, how does this move affect Dogecoin? Well, Musk has taken the lead in expanding Dogecoin's use-cases, allowing Tesla fans to purchase bespoke merch using DOGE as a viable payment method. It can also be used as an accepted form of payment at Tesla's growing network of superchargers. Dogecoin bulls believe that the CEO of Tesla can push Twitter toward accepting DOGE as a form of remuneration for the platform's sizable community of content creators. This, in turn, should expand the userbase of a cryptocurrency that is otherwise characterized by its general lack of utility.

Should this scenario materialize, a meme coin would be able to consistently outperform Bitcoin, which remains vulnerable to the prevailing sentiment in the US equities.

Bitcoin's Persistently High Correlation With US equities is its Achilles Heel 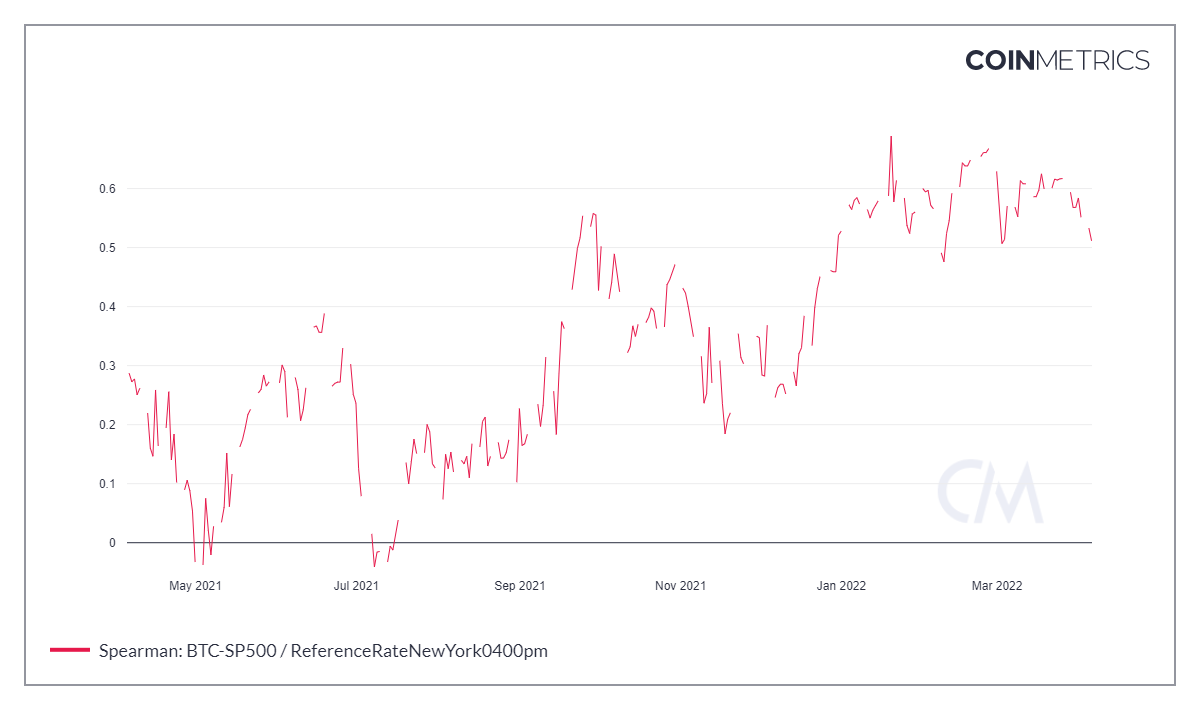 As is evident from the snippet above, Bitcoin currently has a correlation of around 51 percent with the benchmark S&P 500 index. This means that over half of the moves in Bitcoin are explained by the corresponding movement of the S&P 500 index.

This is a troubling development and a sizable obstacle to a sustainable upward ramp in Bitcoin's price. US equities were able to rally after the last FOMC meeting in March as the Fed's hawkish tilt was apparently completely priced in, while the Russia-Ukraine war was perceived to be on the verge of a de-escalation. Perversely, that rally played an important role in easing the overall financial conditions (FCI), proving an anathema to the Fed's stated goal of tightening the FCI in order to curb the demand in the US economy and tame inflation. Consequently, the Fed is now turning increasingly hawkish, as evidenced by the FOMC member Lael Brainard's comments yesterday, in which she appeared willing to increase the magnitude of the Fed's balance sheet normalization efforts. This predictably hammered the US stocks yesterday.

Plus, with the Russia-Ukraine war showing no signs of abating, US equities are likely to come under periodic pressure in the weeks ahead. In light of Bitcoin's high correlation with equities, we do not see a sustained rally in the world's premier cryptocurrency, at least until the prevailing correlation regime persists or the equities somehow cast aside Fed's efforts to tighten the FCI.

In this paradigm, we would not be surprised if Dogecoin continues to outperform Bitcoin, buffeted by Elon Musk's perceived benevolence toward the meme coin.