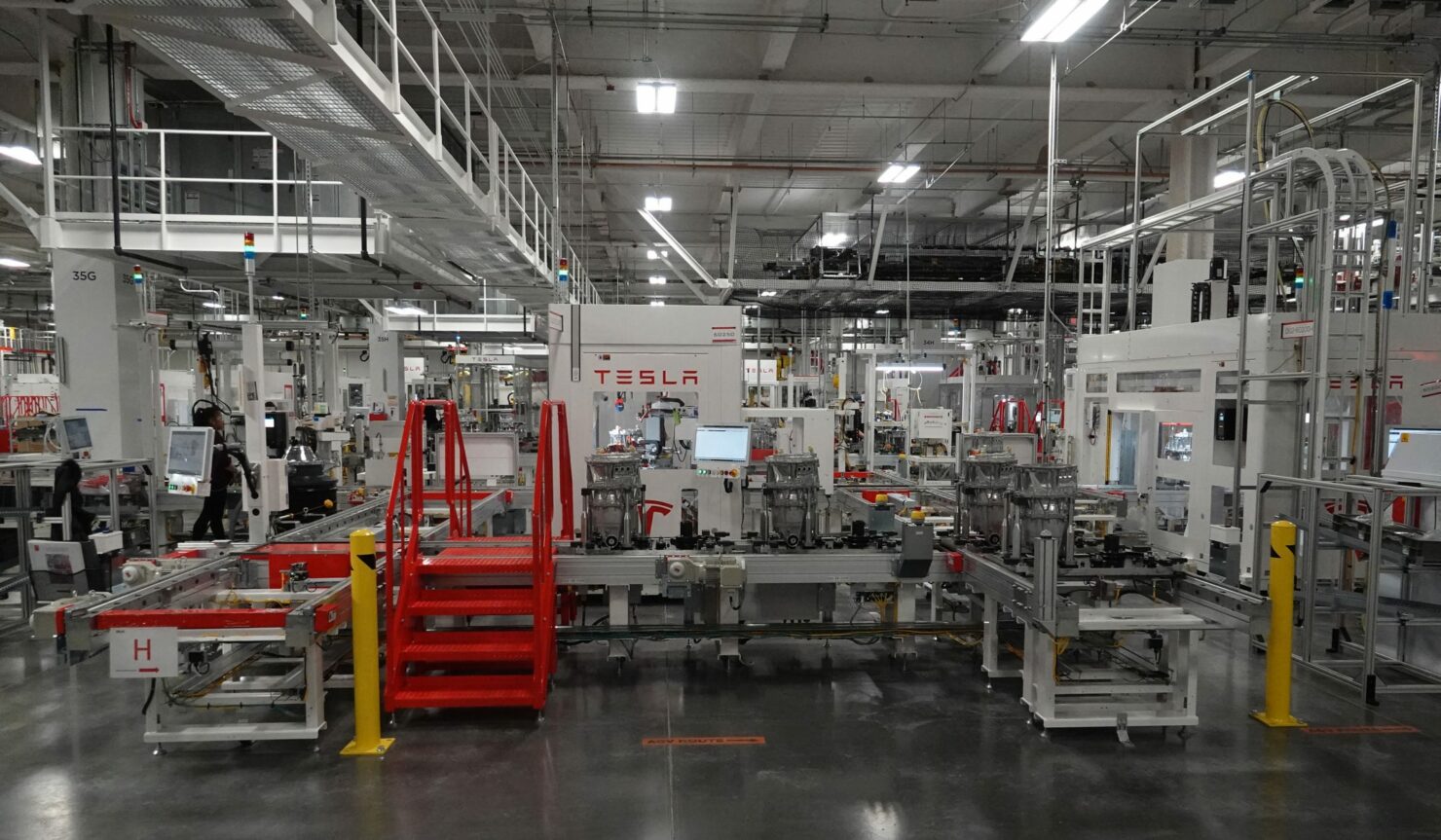 Inside the Nevada Gigafactory; USA Today

Following its massive stock market gain through a good part of the first two months of the year, Tesla Inc (NASDAQ:TSLA) wiped off all gains following the market disruptions caused by COVID-19. The company's market in China was the first to get hit from the pandemic, and with most of Europe now in lockdown, Tesla's management will certainly start looking at the balance sheet a bit more closely.

For Tesla's employees in its Gigafactory 1, Storey County's got some bad news. According to a statement made by County Manager Austin Osborne, the automaker plans to reduce three-quarters of its workforce over the coming days. The claim stems from details provided by Tesla to Storey's emergency operation center (EOC) as a part of the center and Mr. Osborne's discussions with companies operating out of the county's Tahoe-Reno Industrial Center (TRIC).

As opposed to its plants responsible for contributing directly to vehicle manufacturing, Tesla's plant in Nevada is responsible for producing lithium-ion battery packs used primarily in the Model 3. However, despite this, the plant employs roughly 7,000 people according to estimates reported by the Reno Gazzette General, coming in second place in terms of Tesla's largest facilities in terms of people employed.

Tesla operates the facility in partnership with Panasonic Corporation, and today's announcement follows the Japanese company's statement released on Friday. In a written statement, Panasonic reported that it would ramp down operations starting this week before fully shutting down operations for fourteen days during which the plant would be disinfected. Panasonic had also announced that all employees sent home for this time period would receive full benefits.

The move follows guidelines that businesses have to adhere to in order to comply with regulations aimed at reducing the spread of the recent coronavirus outbreak (COVID-19). In the months that have passed since the first case was reported in Wuhan, China, nations around the world have now started to enforce lockdowns reflecting those in the South Asian country early this year. 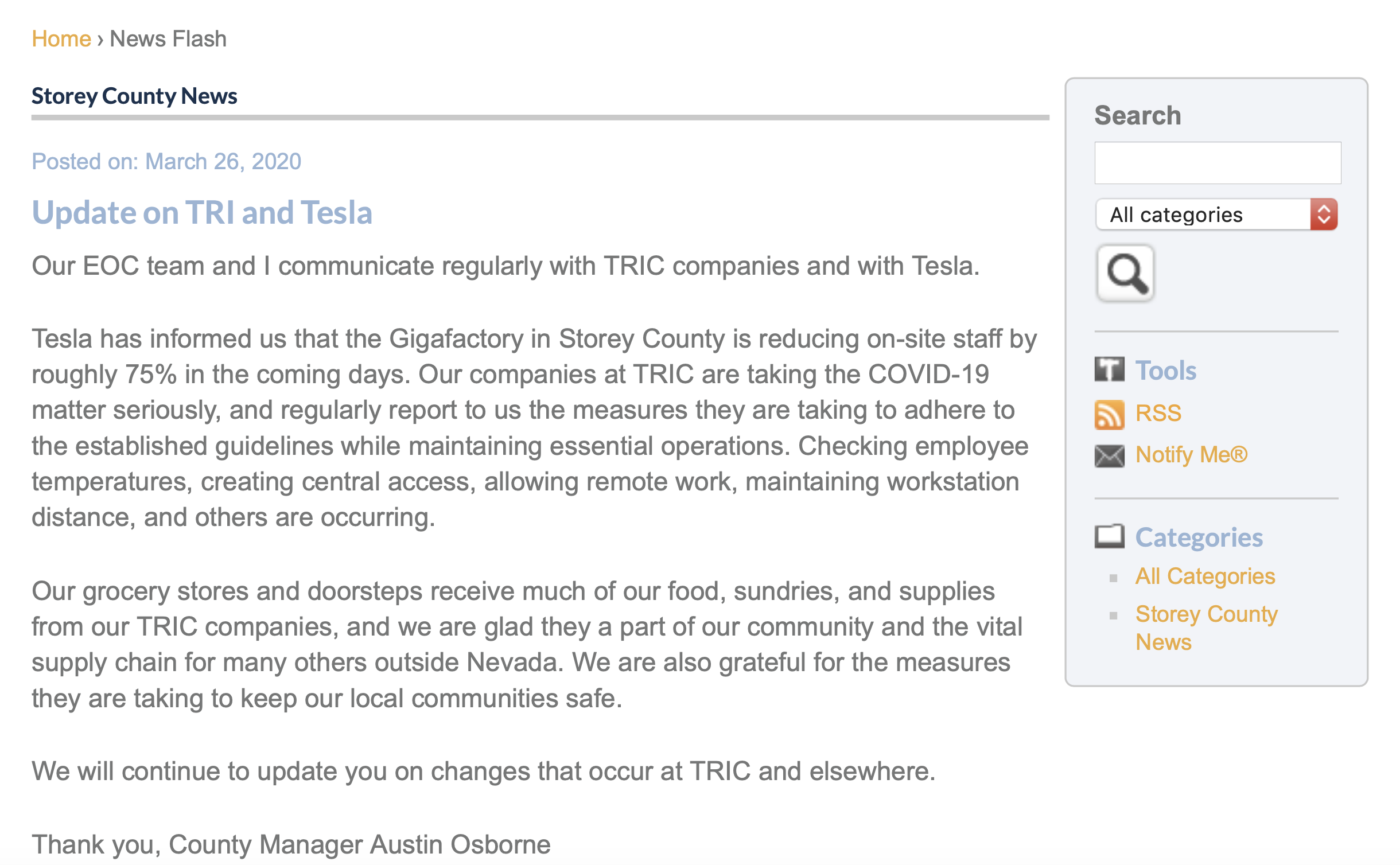 For ensuring that healthcare facilities are able to cope with the number of infected patients adequately, manufacturing facilities, offices and other activities part of daily life have been suspended nearly all over the globe. Storey's list of non-essential businesses as outlined by the governor's office cover luxury industries such as hospitality, gyms and restaurants.

Additionally, and more importantly for Tesla, industries related to the automobile sector such as repairs and services have been deemed necessary by Nevada's governor. And, given that Gigafactory One is mostly responsible for producing components for its vehicles, there might be a possibility that employees of the plant will be able to return to work soon.

The County Manager's statement is vague and for the moment the duration of the on-site staff reduction is unclear. It is possible that Tesla followed Panasonic's lead and also enforces a fourteen-day shutdown, but as the company is yet to respond to Reuters' requests for comment, no statements can be attributed officially.

Panasonic, for its part, plans to end manufacturing equipment for Tesla at the company's manufacturing facility in Buffalo, New York. The pair had entered a joint venture four years back and will continue to work together in Nevada according to statements made by a Panasonic representative back in February. The American electric automaker has been at odds with authorities in the U.S. as it fights to keep production open. Yet as COVID-19 reduces consumer incentive for luxury products, it's unclear whether Tesla will be able to sell vehicles with similar enthusiasm.