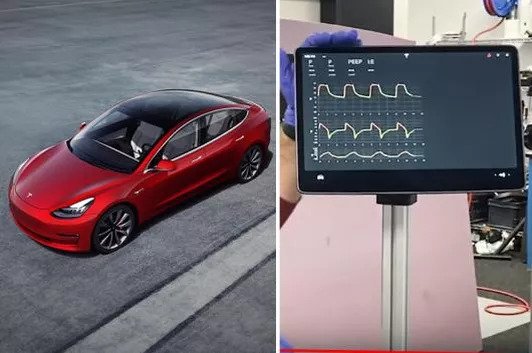 Tesla (NASDAQ:TSLA) has roared to the center stage in an increasingly crowded arena comprised of companies that are banding together with the medical tech industry to manufacture crucial components and devices amid the ongoing coronavirus (COVID-19) pandemic.

The EV giant has posted a video on YouTube that shows an in-house ventilator being constructed from the components of Tesla’s electric vehicles.

“We want to use parts that we know really well, that we know the reliability of, and we can go really fast and they are available in volume. We’ve used a lot of those.”

Bear in mind that ventilators are crucial lifesaving devices for critical patients afflicted with the coronavirus, where a plethora of inflammatory cells allow fluid to accumulate within the lungs, thereby, hampering adequate respiration.

The ventilator prototype shown in the video posted by Tesla Engineering is purportedly controlled by the Model 3’s infotainment system. The center display touchscreen serves as the primary user interface for monitoring and controlling the intake of oxygen by the patient using the ventilator and the resulting outtake of carbon dioxide. Moreover, the infotainment system’s motherboard provides the computing power for driving the requisite regulating valves as well as an assortment of pumps, compressors and an oxygen mixing chamber.

It is, however, uncertain at this stage whether Tesla will be able to produce the demoed ventilator in sufficient quantities, particularly, as the device needs to be approved by the Food and Drug Administration (FDA) in the United States.

Tesla released the ventilator video on Sunday, just a day after Medtronic – the provider of the medical technology and services – tweeted that Elon Musk’s SpaceX is already making a “vital component for critical care #ventilators — more vents sooner for #COVID19 patients.”

It should be noted though that the manufacturing of ventilators is currently being hampered by an acute shortage of crucial components. As an illustration, Mick Farrell – the CEO of ResMed – said on CNBC during an interview that aired on the 1st of April:

“It’s not a final ventilating manufacturing problem. It’s a parts problem. When we get genuine offers from automotive companies, aerospace companies and defense companies, and we’ve had hundreds of offers, we say fantastic! Don’t make a ventilator and buy these parts. Make these 10 parts for us and let us scale, which we can, between us and our competitors, to meet the demands of COVID-19.”

Of course, this development follows a dampener last week when it emerged that the 1,255 ventilators donated by Tesla were, in fact, Bi-PAP devices designed to alleviate sleep apnea, minor cases of pneumonia and other illnesses in which the end-user can benefit from their breathing aided by a machine. As such, these devices use a face mask to deliver air to the user, a design principle that is markedly different from that used in intensive care units by patients with the coronavirus.