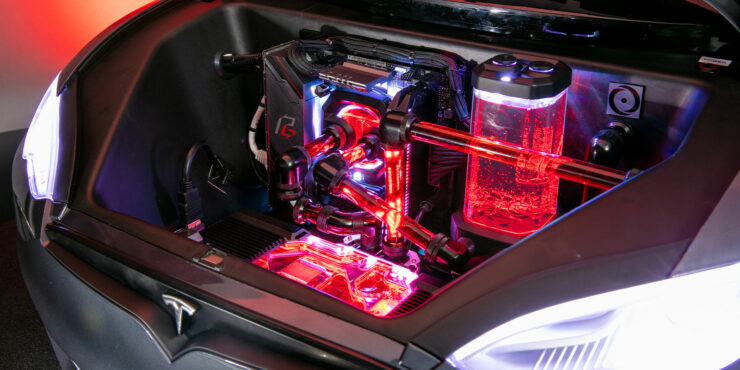 After its stock price performed erratically on the open market yesterday, automobile and energy products manufacturer Tesla Inc (NASDAQ:TSLA) stated that reports of its Shanghai Gigafactory 3 being shutdown are planned and not due to a supply glut, the Nikkei Asian Review reported in Shanghai. Judging by the statements made, Tesla believes that the shutdown is due to the company ramping down production following the plant's testing, with the company's statements quoted by Review rejecting a local media (36 krypton) report.

Given the widescale social and economic disruption that populations all over the globe currently face from the coronavirus, Tesla too was forced to shut down its primary vehicle manufacturing facility in Fremont, California (expected to resume production today, as per Bloomberg). Naturally, as the shutdown cut down vehicle output and consumers in Europe and North America witnessed their pockets shrink, Wall Street started to wonder if the recent surge in the stock market and strong balance sheet performance might be injecting unwarranted optimism into Tesla's future.

The company's self-set vehicle delivery target of 500,000 units for the calendar year 2020 is now widely believed to be unattainable, and with Tesla not providing investors an update regarding its beliefs about the future in terms of delivery estimates, investor focus naturally turned to China.

The East Asian country became the first nation in the world to recover from the virus' strain on its medical resources, and once populations were allowed outdoors, vehicle registrations in China picked up for the entire industry – and Tesla.

Data from February revealed that the registrations of Tesla-made vehicles grew 11x, and information from March at first hinted that Tesla might be shipping vehicles to retailers in bulk before more reports claimed that the American company had surpassed the broader Chinese market in terms of vehicle registrations.

Quoting Nikkei, Tesla has stated that the current Shanghai plant shutdown is "according to plan", as the company ramps operations down from production line testing and maintenance carried out during the holiday season. Production at the Shanghai plant was suspended from the first to the fifth of this month in accordance with Chinese national holidays, and by the looks of it, Tesla has decided to extend this shutdown.

Given the aforementioned registration boost in China, the country increased in importance for Tesla as industry watchers and investors hoped that the loss in demand that the company will undoubtedly face in the western part of the globe might be compensated through strong performance in China.

Naturally, if Tesla's claim that the Gigafactory 3 closure is due to regular maintenance is true, then the company should face no problem in resuming operations. Additionally, the output reduction should help clear channel inventory for retailers, and if managed successfully, then it could prove to be a nice stimulant for sales in China during the rest of the year.

Still, if the economic activity does not pick up in Europe and North America, then the effect of this on the Chinese consumer's spending might be greater than what industry watchers might be currently worrying about. For now, pre-market investors are not overly concerned about Shanghai shutdowns, as evidenced by the 1.3% gain that the shares have made over yesterday's closing so far on 06:00 Eastern Time.

Judging by fresh data, Tesla led the global market in electric vehicle shipments by capturing 19% of the total market. During the quarter, the company delivered 88,400 vehicles according to statements made through its quarterly vehicle delivery report, and blog EV-sales' compilation suggests that this was the highest for battery-electric and plug-in hybrid vehicle shipments.

36 Krypton had cited a Tesla insider to state that the company's Shanghai Gigafactory will resume operations on Monday, The plant is believed to contribute at least 250,000 units to Tesla's global output if current economic conditions hold their course. Krypton's insider had stated that he believed that a "part of the problem" (referring to the shutdown) was due to supply chain constraints resulting from Mexican-made parts not reaching Tesla in time.