Tesla's success with the Shanghai-based Gigafactory 3 has injected the company's stock with fresh optimism from Wall Street analysts and investors, both retail and institutional. The Palo Alto, California company credited by many to have laid solid foundations for a gasoline-free future for cars has seen its fair share of ups and downs since inception. These have come in the form of production and delivery delays, with the company's founder and C.E.O. Mr. Elon Musk's bold behavior adding flavor to the entire ordeal.

Yesterday, filings with the Securities and Exchange Commission revealed that investment bank JPMorgan Chase had increased its holdings in Tesla by 610% in the quarter that ended on December 31st, 2019. As of December 31st, JPMorgan owned 2,537,499 Tesla (NASDAQ:TSLA) shares, and our estimates reveal that if the bank has not sold any of these, then as of Monday, the value of its investments in the automaker has grown by a cool $965 million.

Now, more filings with the SEC reveal the sentiment over at Citigroup with regards to Tesla. These filings, reviewed by Wccftech, show this sentiment mirrors the mood at JPMorgan.

Citigroup Increased Its Tesla (NASDAQ:TSLA) Holdings By 24% In December Quarter, Making It Second Big Industry Player To Do So

As per the details, Citigroup's stake in Tesla equaled 1,781,777 shares at the end of September 2019. Over the course of the next three months, perhaps fuelled by the company's success in managing production in the Gigafactory 3, Citigroup acquired 424,915 more Tesla shares - a move that increased the investment bank's holding by 24% and brought it to a final value of 2,206,692 shares as of December 31st, 2019.

Carrying out some basic arithmetic based on the assumption that Citigroup Inc did not acquire more or disposed of any Tesla shares until the end of trading yesterday allows us to estimate the gain that the bank has made on its holdings in the automaker. Tesla's closing price at the end of December was $418.33 and the company's stock closed at $767.29 yesterday, marking for a 0.92% decreased over the prior day's price as word of a Model X recall started to make its way around the street. 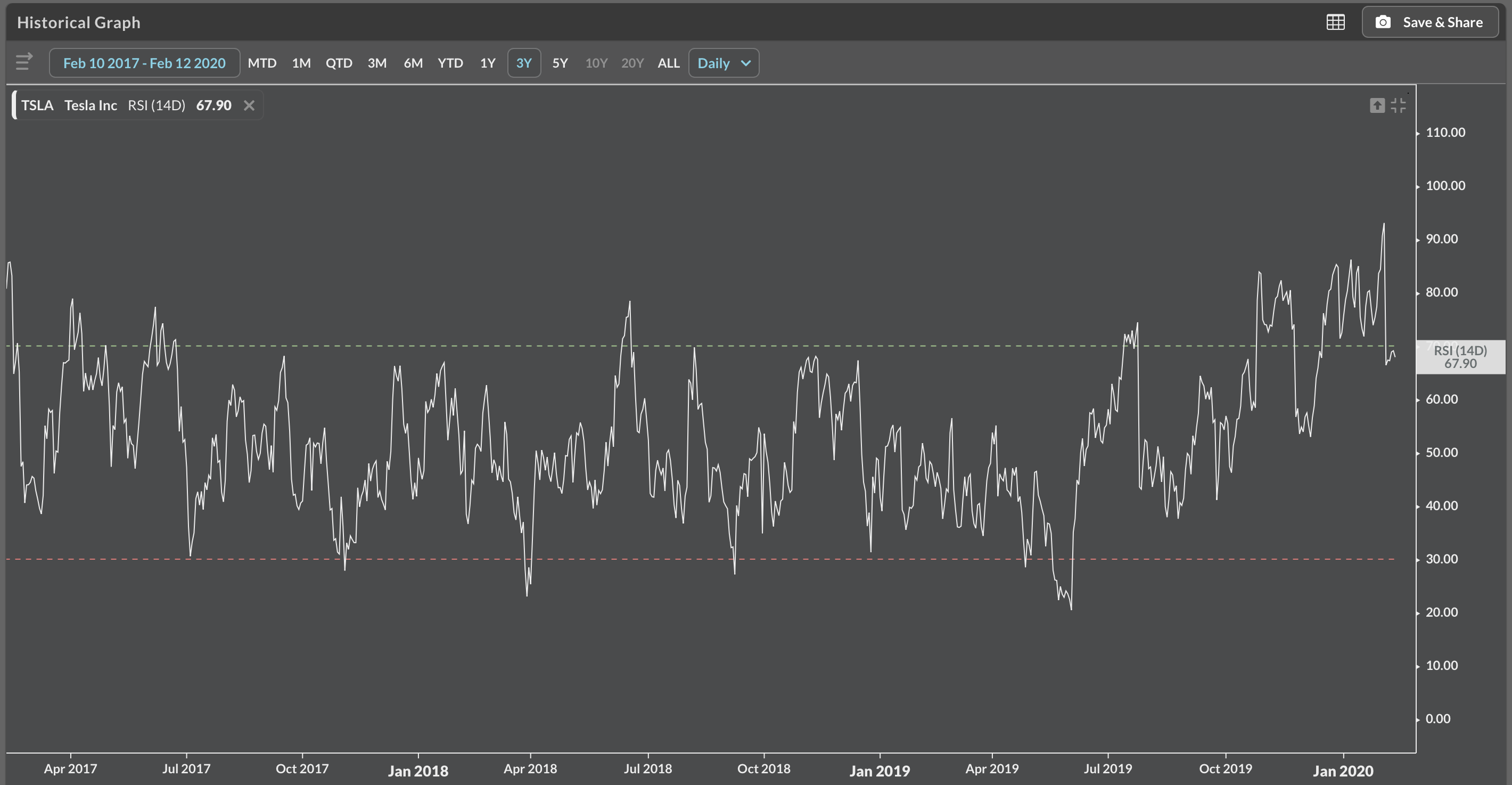 Wilder's Relative Strength Index for TSLA stock sits at 67.90, only a few points shy of landing it in overbought territory; Koyfin

Based on these figures, Citigroup's Tesla holdings were worth approximately $923 million at the end of 2019. By the close of trading yesterday, these holdings had grown to $1.69 billion, making for a $770 million or an 83% gain since the start of this year. Of course, and as we've noted above,  there is no publicly available information to verify that Citigroup has not liquidated any of its holdings in Tesla over the course of this month, and our research suggests that the steep price drops that the stock witnessed earlier this month were more of a result of retail, rather than institutional selling.

Speaking about Tesla stock, a cursory glance at James Wilder Jr.'s relative stock index reveals that as of yesterday, Tesla shares are just 2.10 points short of entering overbought territory. The stock entered overbought territory on December 16th last year and left it on the fifth of this month when Tesla's share price dropped by $85.56 during the day's trading.

While the production ramp in the Shanghai Gigafactory has brightened Tesla's future, the company needs to be vigilant if it's to sustain this bout of good fortune. Its problems with autopilot and a fourth plant due for construction in the German state of Brandenberg will determine if Tesla is capable of delivering over the long term. To that end, Tesla's decision to recall 15,000 Model X vehicles manufactured prior to mid-October 2016 is a good step in this direction.