This is the part, much of our hardware audience has been waiting for. Where we explore not only the hardware side of things behind Tesla's autopilot but compare them to alternatives as well. 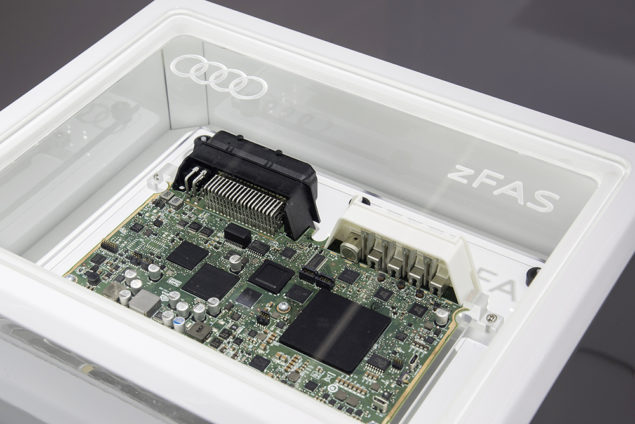 An Audi zFAS board with the Mobileye chip visible in the middle. @Audi

The EyeQ3 debuted in November 2014 with the Tesla Model S and has had over 9 more launches this year. Based on the 40nm process, the tiny silicon packs 4 Cores clocked at 500 Mhz, with 64 MAC (Multiply and Accumulate Units) per core. With TDP of just 2.5W and a utilization of 80%, the chip can deliver upto 102 Million Multiply and Accumulate Operations per Second. The processor architecture has been built from the ground up to focus on specific ADAS processing (naturally).

To give a better context, given below is a comparison with Nvidia’s Tegra X1. The recent processor, based on the much more advanced 20nm process rocks 256 CUDA core which have about 2 MAC per core. With a utilization rate of 28% the chip can deliver 143 Million Multiply and Accumulate Operations per Second. The TDP as we know is 10W which makes it far less efficient than the Mobileye offering. The EyeQ3 has a die size of just 42mm² whileas the Tegra X1 has a die size of 126mm². Here is a comparison table of the two processors (utilization measured using cuDNN (Nvidia’s implementation of DNN) on “GTX 980” with 2048 Maxwell Cuda cores): 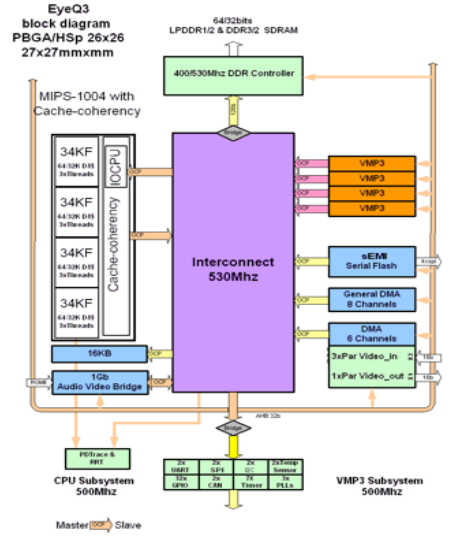 The EyeQ3 chip is a 4+4 design with 4 MIPS cores and 4 VMP cores (Vector Microcode Processors). The SoC is compatible with LPDDR1/LPDDR2/DDR2/DDR3 SDRAM and capable of executing both 32 bit and 64 bit instructions. The interconnect is clocked at 530 Mhz. Both the CPU and VMP are clocked at 500 Mhz. The successor to this chip will be the EyeQ4 processor which has an estimated arrival year of 2018.

I am sure most of us will remember the Drive PX board Nvidia showed off at CES this year. Well as it turns out, the board in question was also an Audi zFAS board and had the EyeQ3 chip on board – which handles all of the actual ADAS functionality. The same board is featured on Nvidia’s website as well. The company has marketed Drive PX as an alternative to Mobileye and maintains that the board does not use the EyeQ3 chip. 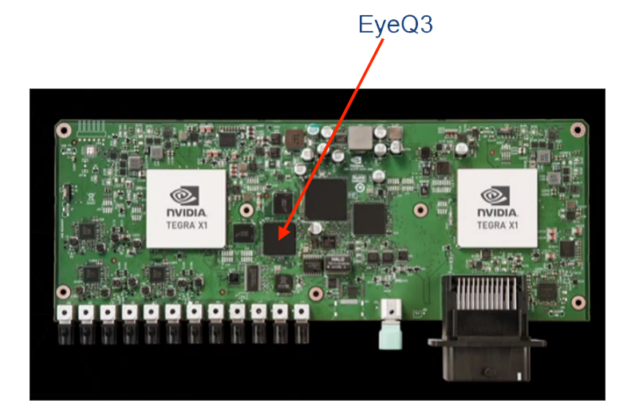 A screen grab from Mobileye's presentation.

Mobileye plans to introduce the EyeQ4 chip by 2018 – a truly worth upgrade with 14 computing cores, out of which 10 are accelerators. You will have your usual 4 cores as well as accelerators of three different kinds: PMA (Programmable Macro Array), VMP (Vector Microcode Processors) and MPCs (Multithreaded Processing Clusters). The actual count will be 4 Cores, 6 VMPs, 2 PMAs and 2 MPCs for the EyeQ4. This will result in approximately 1.26 Billion MAC/s or 2.5 Tflops. And here is the best part – all of this will be done while staying within the TDP target of 3 Watts. 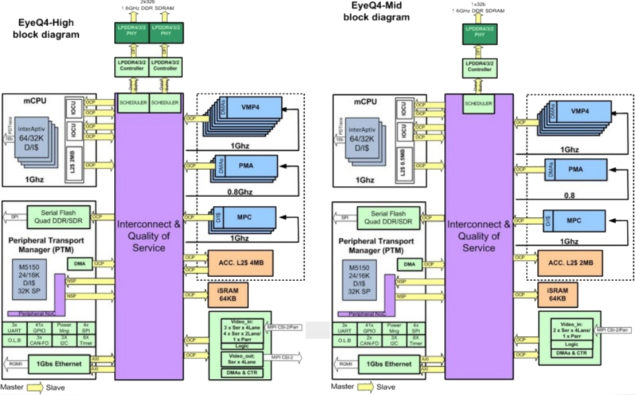 As you can see from the diagram the EyeQ4 is exponentially more complex than its predecessor and will be able to handle diverse loads. Then EyeQ4 has a utilization percentage of 96% - which is about 4 times higher than any GPU in GPGPU mode. It is 10 times more powerful than the EyeQ3 and will be able to process input from a maximum of 10 cameras at 36 frames per second.

The EyeQ4 has had a single design win so far (currently unknown) which means that the honor to power the future self-driving Tesla's could be up for grabs for rival manufacturers. Nvidia's offerings were relatively under powered these rounds and no doubt, 16nm FinFET based offerings will be much more superior not only in terms of efficiency but customized compute as well.

That said, I remain skeptical that the company will be able to score a design win with Tesla in the future, considering the enormous amount of experience gap between Mobileye and the GPU manufacturer. Unlike Nvidia, whose architecture is usually designed for an all rounded purpose and runs DNNs in a GPGPU environment, Mobileye's architecture is very explicitly designed for a single purpose: to execute ADAS and self driving functionality.