It is no secret that Sledgehammer Games is working on the upcoming next-gen first-person shooter Call of Duty title that is expected to come out later this year. The developer has confirmed the game that has been in development for over three years as next-gen-first Call of Duty title, meaning the game is being developed primarily for next-gen platforms.

No matter how many times Call of Duty games are flaked for their weak visual appearances and less innovative gameplay, Activision's shooter franchise still stands atop most popular first-person shooter video game series. Activision's Call of Duty: Ghosts took a considerable amount of mauling from the video game press, yet still it was one of the most sold games for months after its release, topping North America and Europe's charts. Although, to preserve the brand's status and leave less room for errors, this year's Call of Duty is being developed by Sledgehammer Games.

To spin the wheel of excitement, Sledgehammer offered a quick sneak peek at the new entry in the Call of Duty franchise. The developer teased a first look at its upcoming first-person shooter video game during its panel at Game Developers Conference 2014 that was held last month. The panel was titled ‘Quest for Quality: Maximizing the Relationship between Creative and Production’. GDC Vault, the video recording host of the conference's talks saved the teaser image of Call of Duty 2014 for those who were not able to take part in the panel.

The image shows two in-game characters, with one of them focused closely. The character in the image seems to represent the Activision researchers’ realistic facial modeling that was shown at last year’s GDC. The focus is on the sweaty face of a soldier from the game. The facial details show a prominent boost in Call of Duty visuals. The graphics over all look way better than all of the Call of Duty games released to date. The image can be seen below. 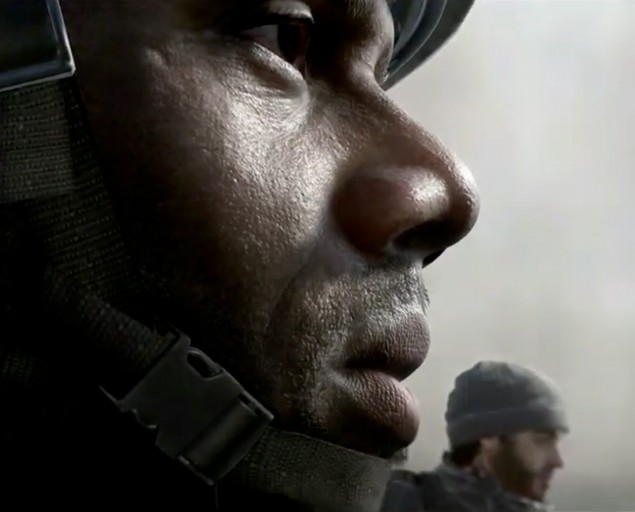 "We can't talk at all about Call of Duty for this year," said Sledgehammer's Michael Condrey while he was delivering a talk with his fellow studio co-founder Glen Schofield. "[Activision] said you can't show anything from Call of Duty this year, and you certainly can't show in-game rendered characters from this year's game." An image of Call of Duty 2014 was then shown by Condrey for a split-second. The note with the image said, “actual in-game characters."