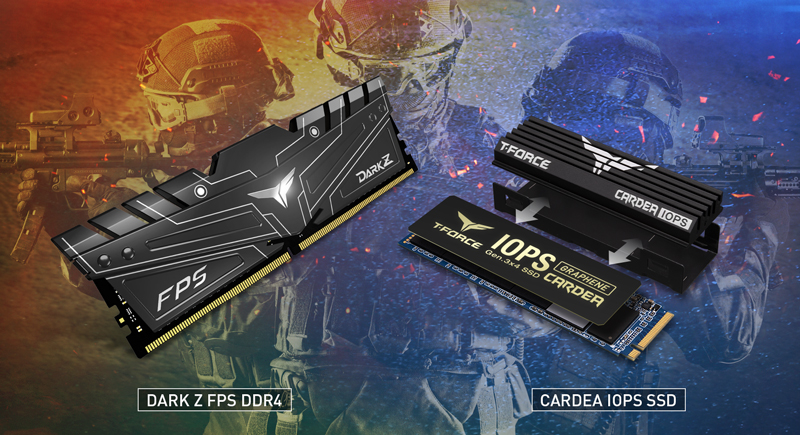 When building a PC, it isn't the wisest idea to spend all your money on your processor and graphics card. The money should spread across your system with quality parts. This allows you to avoid bottlenecking, but many undervalue the performance memory and storage can bring. TEAMGROUP knows there is a need for high-quality and affordable memory and storage, so they have launched the T-FORCE DARK Z FPS Gaming Memory and the CARDEA IOPS PCIe SSD.

The T-FORCE DARK Z FPS Gaming Memory was designed by TEAMGROUP to have one purpose: to increase your performance in-game. The name literally has FPS in it, so it must obviously be to improve the frames-per-second in games. It features RAM speeds of up to 4000MHz and a low CAS latency of CL16. As well as having great specifications, T-Force products are always known for having a great design. It features a plated T-FORCE logo in the center with larger outlines extending to the edges. The final touch is armor-like metal giving it a dark, but futuristic look. TEAMGROUP even tested the memory in PUBG and found it had a 20 percent performance boost over a common 2133MHz memory stick.

The other offering from TEAMGROUP is the T-Force CARDEA IOPS PCIe SSD. The drive is using the semi outdated PCIe Gen3x4 interface but does the job at a budget price point. The sequential read speeds of up to 3,400 and sequential write speeds of up to 3,000 MB/s. The IOPS value sits at 680K/670K which accurately represents its real-world performance. Another feature that catches the eye of many is the heatsink. The heatsink uses TEAMGROUP's newest aluminum fin and graphene heat sink technology to provide better heat dissipation and increase performance.

TEAMGROUP has yet again launched more affordable and budget-friendly options in the memory and storage market. Both the T-FORCE DARK Z FPS Gaming Memory and the CARDEA IOPS PCIe SSD are solid pickups.