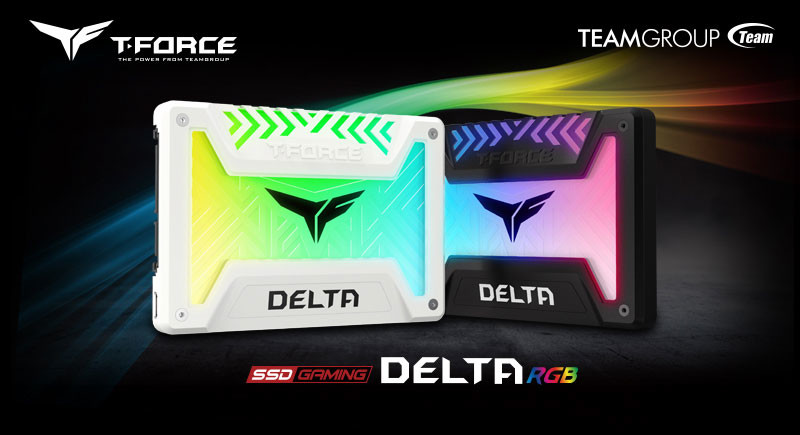 Team Group has introduced another product to their T-Force line up with the T-Force Delta RGB SSD, because...Why not at this point? In addition to their partnership with ASUS for TUF branded T-Force RAM they have also decided to make an RGB SSD, it comes in the 2.5 inch SATA form factor and has the largest RGB luminous area of any SSD on the market. They say the ratio of non-luminous to luminous is 5:3 which can make your PC even more colorful and bright.

Unfortunately scouring the press release we see no mention of the NAND being used besides it being 3D NAND, which manufacturer it will use, what type of controller though we do have speeds which are.

We do however have much more information on the RGB functionality...So lets get down to it.

The T-Force Delta RGB SSD has the standard 16.8 million color LEDs and can be synchronized with the motherboard. They say there is "Two industry exclusive versions released at once" The DELTA S (Simple) and DELTA (Magnificent version). It also comes in two colors. Black and White.

As mentioned before it is 2.5" SATA drive that is 9.5mm in height making it suitable for laptop use and even though Team Group mentions upgrading gaming laptops with it, I can't see a reason why since it is RGB and no laptops I can think of have exposed drive placements where you could even see the RGBs. The DELTA S (Simple) has a soft surface glow with color changes set to default though can use a 12V RGB connector on the motherboard while the Delta ("Magnificent") uses the motherboard 5v ADD connector with a variety of changing lighting effects, Team Group says "It can also present a magnificent mixed color effect (rainbow effect) with water flowing light to maximize the variability of color."

Pricing nor availability have been set and we will update if and when this is released in the states.