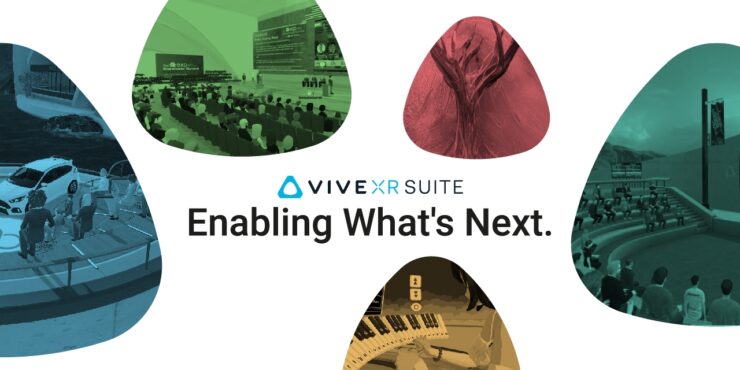 The UK has gone into lockdown yet again thanks to COVID. On that trend, the majority of Europe finds itself back in lockdown or with much higher restrictions to slow the spread. It also wouldn't come as a surprise if Joe Biden, practically guaranteed to be the next President of the United States, pushed for a lockdown when he takes office if the spread remains the same or gets worse. No matter which way you look at this, social connectivity, productivity and more have all suffered. HTC hopes that they have a selection of tools that can aid at least part of this.

Recently I was able to speak to Graham Wheeler, the EMEA General Manager for HTC, about the XR Suite, the future of VR and more. More than just talking about the products, this was a way to experience the Vive Sync application and feel the immersion and use it can bring for meetings. It also allowed me to see the potential it has for productivity, social interaction, and more.

HTC Vive Sync - Being in the Meeting and Engagement

Let me be honest, when it comes to meetings and presentations over Zoom, Discord and more, I find it way too easy to get distracted. Even during our weekly podcast, I'll find myself looking at my phone or reading something in a separate tab when I'm not ranting about something terrible occurring in video games. It's not that I'm not listening, I'm multitasking.

In my meeting with Graham Wheeler, this sort of multitasking was impossible. I had the HTC Vive Cosmos (review here) on my head. With the use of the VR headset comes the tracking of your head, 3D audio and the added sense of immersion coming from the fact that wherever you look, that meeting environment is surrounding you. 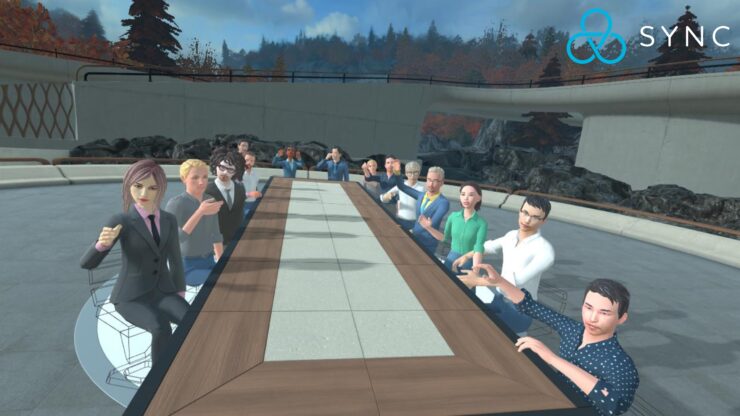 Let's talk environment and my actual perception of Vive Sync first. Graham was using the Vive Pro as well as a camera tracking his face. The Vive Pro can track his eye movement and blinking, with the camera also tracking and allowing his avatar to mimic mouth and other facial movements, allowing the avatar to show anything from a yawn to the puffing out of a face.

Seeing this visibly is more than a little impressive. Of course, with a VR avatar, there is always an uncanny valley effect. I also can't imagine most people worrying about being able to see both eye and mouth movement, but the option is there. What was interesting to me is, in the research HTC have done and with their partners, is that meetings tend to go quicker in a VR space. People are engaged, act as if they are in a meeting room.

Working, Collaborating and Learning from Home

I honestly can't dispute the level of engagement being up there with being in an actual meeting. When Graham brought up videos, PowerPoints and even live 3D models of cars, and more, having something that appeared physical in front of me made it feel like this was an actual meeting, that there was something there. It involved turning my avatar around using the controllers but, most of all, moving my head. This was particularly noticeable when Catrina would speak, sat to my left in the environment, and I'd turn my head to listen to her. This also shows to others in the meeting that you are engaged and listening.

Of course, those who need to multitask, to take notes, there are options. Vive Sync features an internal tablet that lets you take notes, pictures and more for your own, or group use. In addition to this, there is a marker ability which allows you to mark and highlight areas. Are you looking at the model of a car, bike, maybe even an enlarged design of a motherboard that you're working on? Just pull out what is essentially a crayon and mark the place you're talking about. 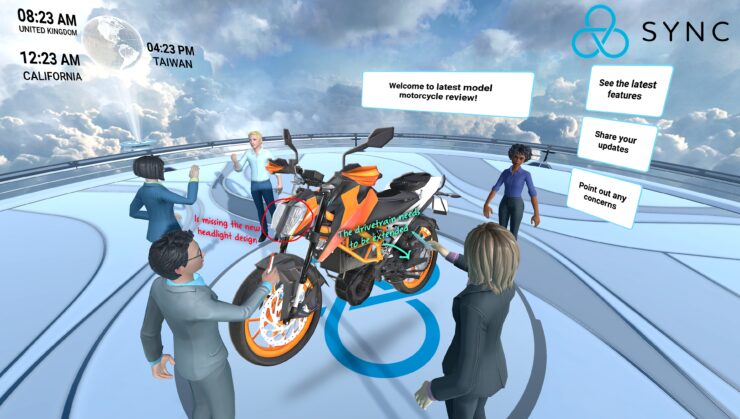 There's no doubt in my mind, mostly having seen and used it first-hand, that this sort of VR environment could be beneficial for several aspects. From being able to pull in multiple versions of a simple plan, getting a group of people together to talk about them and, most importantly, see them in a 3D form. Even more important is that time and distance isn't a factor, allowing cross-continental discussions and input in real-time.

On an educational front, there's a lot to be said about VR. Graham told me about a company called RiVR which does VR training for emergency services, telling me about the training they did with police forces that he was able to attend. He was also able to tell me about VR in a school system, the educational abilities that provides, saying this:

In Poland, for example, the schools because of chemistry labs not being able to use chemicals that are banned, and dangerous equipment anymore, they're actually doing chemistry lessons in VR. They're using those chemicals, showing people what happens, because obviously nobody is at risk.

So, what exactly is XR Suite and what does it offer. Here, I'll quote Graham Wheeler directly:

Vive Sync is the tool that you're seeing.

We have Vive Museums, with the museum of other reality that’s allowing for shows and permanent fixtures when it comes to museum exhibits.

We have Vive Sessions, which is more a larger auditorium type training, and launch bench, where we did the announcement of the XR Suite.

We have Vive Social, which is using VR Chat, which is a really big virtual spatial tool for collaboration and chatting, it's for the scenario of people having permanent fixtures which could be for things like large brands wanting to do experimental experience events, where they can come in an area as a permanent experience.

Lastly is Vive Campus, from VirBELA, which is a great tool where they come in and mimic your actual office and create it in virtual reality. You can go into your office, walk around the campus, go into people’s office, and talk to them, giving a feeling of working together.

All of these are supported by single-sign-on and will be combined with similar looks and UI's, designed to make it all feel like a singular platform. The servers are run using AWS (Amazon Web Services) and, as such, are optimised to allow for meetings across the globe. More than this, it will enable experiences through VR that - particularly in the current climate - wouldn't be available otherwise. 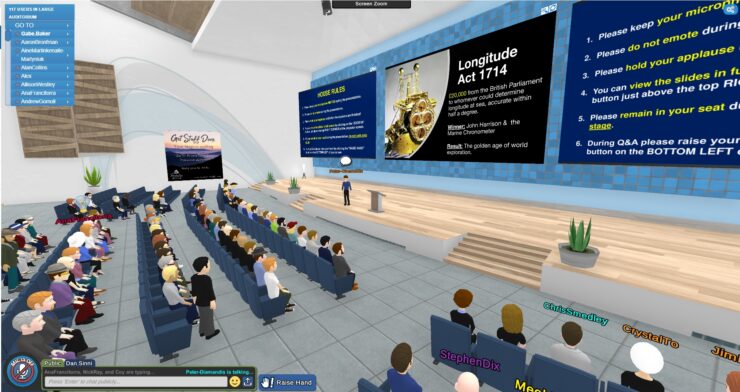 For example, as more aspects of the world are finding themselves locked down and going digital, it would be possible to hold a concert using VR headsets. Film screenings in a virtual cinema, full events to meet with prospective clients, investors, and audiences. All with your products and their specifications displayed, interactive in a virtual space. Graham spoke about two events HTC held, saying this:

We, this year alone, have done so many events with these tools. So, for example, The Fabric of Reality was from Vive Museum, using The Museum of Other Reality with Verizon Media, where during Fashion Week we actually brought in some designs of the future and allowed people to experience them. That was on both the PC, in VR, and also streamed on places like YouTube so showing to big audiences.

If you take another audience like the Venice Film Festival, with Vive Social we enabled the ability to review the content from Venice Film Festival VR category. Three amazing judges checked it out and, actually, we had over a thousand people attend that event, just looking through and seeing how it was.

As well as Venice, there is also Raindance Immersive, which is ongoing right now. Other social aspects include concerts. We've seen a world-record-breaking concert in Fortnite this year already. Graham mentioned how Bjork had done several interactive and three-dimensional shows using VR, but of course, noting how there is considerable untapped potential for the medium.

The question then comes to price and accessibility. It's not realistically affordable for everybody to have a headset, both socially and within a company who are looking at this on a B2B level. This doesn't mean that people can't get involved in meetings, lessons, or social aspects., Affordability and accessibility being placed to the forefront, thanks to PC and mobile access. To quote Graham:

It really allows that flexibility. It even has PC viewing without a VR headset, so that you can still be avatar in the space. In future you'll even be able to use a smartphone to be on a 2D stream but looking in that 3D environment. We really do find it a great tool to move forward.

On a B2B level, the XR Suite is entirely customisable with HTC offering bespoke packages. You tailor the package to your needs, which can also include headsets. 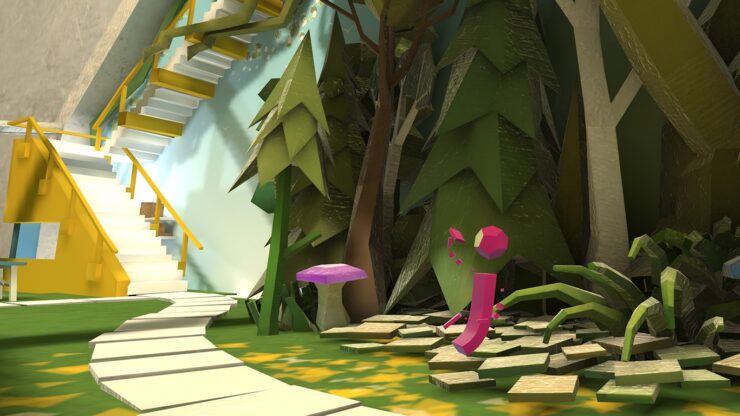 Looking to the Future - XR Suite, AR/VR Glasses, and More

Speaking about the XR Suite and VR, HTC is looking at businesses, education, and similar areas as a transitionary period. The hope is that VR, now it's moved past the enthusiast and moving into the B2B space, is that it will eventually be used by the general public, following the trend set by the tech before it.

What was interesting is a part of the conversation on the future of the tech. Specifically, what HTC is looking towards. Seven years ago, before you could honestly say VR was ready, Google attempted AR glasses with Google Glass. What I wasn't expecting was the conversation turning to this again. HTC is thinking about this direction and leading the VR and AR market. This was indicated by Graham saying this:

Going forward, actually we want everyone to own a pair of lightweight glasses that, then, can do these functionalities and it be the next UI paradigm, that everybody gets spatial information as they walk down the street. Yelp reviews, video calls from friends, or AR features as they're walking, etc.

It's genuinely interesting to me, the potential of AR glasses, the connectivity they bring and the potential information at your eyes at any time. There are always going to be issues and learning blocks, but as HTC are showing with VR, they're more than capable of learning and adapting. The XR Suite and its capabilities, of which I've only scratched the surface, highlights this. Without a shadow of a doubt - and I mean no offence to those who have held the many presentations and meetings on games I've had since it went digital - this has been the most engaged I've been in a one-hour presentation and discussion.

The potential to work, learn and - to an extent - socialise is there. As VR moves even further into the mainstream and becomes more affordable, it genuinely seems like HTC is looking to lead the way.