Capcom has been throwing a lot of ports in the PC’s way; Devil May Cry 4, Resident Evil 5, Street Fighter 4 and Devil May Cry 3 are just the few examples coming to my head right now. It’s no big secret that Capcom and Rockstar have hate towards the PC community hence they always release a popular console on the PC. But there is a catch to this; the games are ports of the XBOX 360 version of the game. What’s wrong with a port you ask? The games require more power i.e The more cores your CPU has the better gameplay you experience a popular example of this can be of Rockstars Grand Theft Auto which bought Quad core CPU’s and i7 desktops to their knees when the game would run at <30 FPS on high settings and above passing the 1080p resolution. 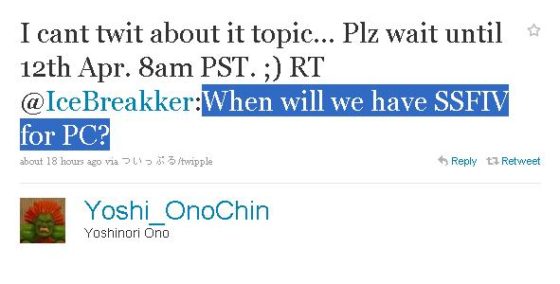 But Devil May Cry 4 and Resident Evil 5 are also examples of ports, once again the more cores you have the better performance you get. Street Fighter 4 was released to the PC with better graphics yes but it was yet again another port with performance issues.

Super Street Fighter 4 may be in the cards for PC gamers after PS3 / XBOX 360 and more recently Nintendo 3DS owners have been experiencing the game for well over a year now. When Capcom’s Yoshinori Ono responded to a tweet by “IceBreakker” by saying “I can’t twit about it topic... Plz wait until 12th Apr. 8am PST. ;)” in response to “When will we have SSFIV for PC?” Could this mean Super Street Fighter 4 might just find it’s way on the PC after all?