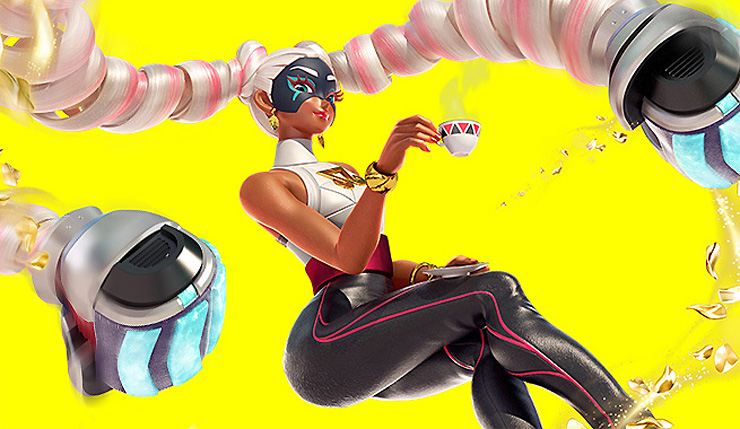 During today’s surprise Nintendo Direct Mini, the next DLC fighter for Super Smash Bros. Ultimate was unveiled – or at least, the franchise the fighter originates from was revealed. The next Smash DLC fighter, the seventh overall, will come from Nintendo’s own quirky Switch fighter ARMS, although we don’t yet know who exactly it will be. Personally, I’m hoping for Twintelle or Kid Cobra, but we shall see!

Unfortunately, Smash fans will have to wait a while to get their hands on the new ARMS fighter, as Nintendo has said they need a bit more time to develop the character…

Joining the battle from ARMS, this fighter's a bit unusual due to those extendable arms, so we'll have to extend our development time too. Please stay tuned for just a bit longer.

In a recent column Super Smash Bros. creator Masahiro Sakurai hinted the development of future DLC characters may be delayed by COVID-19, so expect the somewhat extended wait for the ARMS fighter to be the norm this year.

Super Smash Bros. Ultimate recently wrapped up its first Fighters Pass, which included five DLC characters (Dragon Quest’s Hero, Persona 5’s Joker, Banjo & Kazooie, Terry Bogard, and Byleth). A second Fighters Pass consisting of six additional characters has been announced, with the ARMs fighter being the first of the bunch. Nintendo hasn’t said anything about who else we might be getting, but I’m kind of hoping they mine their own franchises for content instead of relying heavily on guest fighters like they did with Fighters Pass 1. Also, no more guys with swords!

Super Smash Bros. Ultimate is available now on Nintendo Switch, and the ARMS fighter will be fully unveiled and released sometime in June. Want to catch up on ARMS before the new Smash fighter arrives? Nintendo Switch Online subscribers can try out a free trial of ARMS starting on April 6. The game is a surprising amount of fun, so definitely give it a spin!