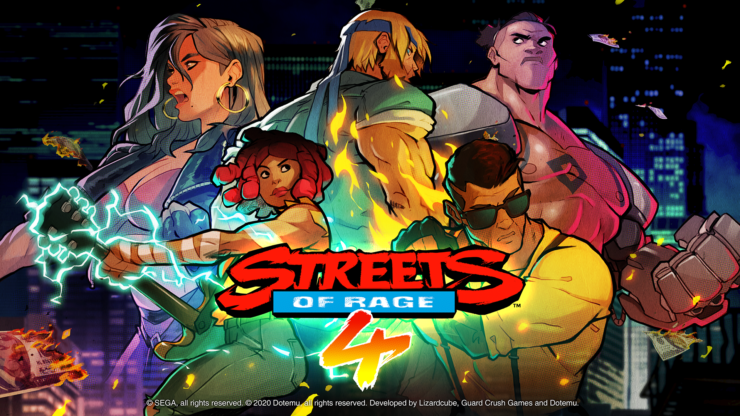 It's been two and a half decades since the last real Streets of Rage graced our consoles and developers Lizardcube and Guard Crush Games have been doing their best to make a game worthy of that weight. Aptly named Streets of Rage 4, this upcoming belt action brawler (out later this Spring for PlayStation 4, Xbox One, Nintendo Switch, and PC) takes us back to the mean streets with some familiar things while introducing a whole lot of new ideas.

Streets of Rage 4 remains a belt action title as true as the games that came before it. The genre can best be described as punching and kicking your way through hoards of enemies and moving across a horizontal plane while the world scrolls behind you, like on a conveyor belt. Guard Crush Games doesn't take a lot of liberties in expanding the genre beyond that but instead focusing on what makes that genre so addictive.

Streets of Rage 4 Review – A Beautiful Brawl Down Memory Lane

At launch, Streets of Rage 4 will feature five characters (they're keeping the sixth one a secret) and up to four-player cooperative play. Each character in the roster has their own proficiencies with attack, defense and speed, much like their Genesis counterparts. Half of the cast is brand new while returning Streets of Rage protagonists like Axel have seen the years be less than kind to them. Axel's build is much stockier and more in line with a muscly dad bod since the last time he was playable.

Combat takes place on a vertical plane, while players can freely walk up and down to better position themselves. As mentioned in our interview below, Streets of Rage 4 doesn't include the vertical dodge roll that first appeared in Streets of Rage 3 because they wanted to make this upcoming sequel more contemporary. Instead, the best defensive options will often be taking a strong offense.

Each character in Streets of Rage 4 has a similar palette of moves: normal attacks and throws, Beat Moves that consume a small chunk of health to pull off, and Star Moves that use a special token to pull off but are invulnerable, so quite handy when you're surrounded by goons. Jumps and dashes can be mixed into the combat to make combos flow easier and enemies can be juggled in the air wither varying degrees of finesse depending on the character.

As we pummeled our way to the end of Stage 1 in Streets of Rage 4, we took a quiet breather to relax and chat with Cyrille Lagarigue, the co-founder of Guard Crush Games and Technical Director on the project. Cyrille started by letting me know that the first stage of Streets of Rage 4 marked the return of Yuzu Koshiro, the original composer of the previous games on Sega Genesis. Rather than being a remix of an existing track, the first song we heard was an all-new composition from Yuzu Koshiro himself.

Our demo opened with picking our two characters out of the available roster of five, starting with Cyrille as Adam and myself picking up Cherry.

Cyrille: These are the two fast characters of the game because they are the two characters that have a dash. Cherry can run and Adam has a dash that can allow him to go behind enemies.

It looks like a lateral dash. It's not going up and down.

No, no, we don't have this move. That was introduced in Streets of Rage 3. We decided not to include it because we wanted a game that was closer in terms of feeling to Streets of Rage 2. It's about placement and about where you are in the stage and you have to commit to where you put yourself on the screen relative to other enemies.

You're showing off five playable characters, but are there plans for others later on down the line for Streets of Rage 4?

It's gonna be these five characters but we may have a surprise later. I can't say anything right now.

Since unlockables are all the rage, do you plan on having any for Streets of Rage 4?

What consoles are you targeting for the launch of Streets of Rage 4?

All the consoles? Does that mean the PlayStation 4 and Xbox Series X as well?

I don't know. If they're retro [backwards] compatible, yes.

[Streets of Rage 4] doesn't need a lot of power. It's a 2D game, so it's going to run on Nintendo Switch the same as on Xbox, PS4 and PC.

How many players are supported in multiplayer?

It's two-player online and up to four-player local.

So, how is it compared to the original games?

It's a lot more freeform. I'm not locked into very specific combo strings. I like that flexibility. I find that a lot of brawlers these days have a solution of just dashing out of the combo and you're just doing the same combo. I like being able to mix up and add in a forward move or a jump kick, or maybe build a combo into a throw if they're still in a grounded state.

Yes, we try to have each character have moves that have different uses because you need moves that are useful in different situations. You have your beat moves that generally do more damage than a simple combo but have more recovery, so you can use it when you know you aren't going to be attacked from behind. You have the special moves that have more range but take life. You have the star moves that you have to use when there are a lot of enemies or against the boss and you can chain them all differently. You also have moves that allow you to reposition yourself or avoid attacks because they have invincibility frames.

What sort of defensive options are there for the player?

It depends really on the character. For most characters, the two defensive options are: a neutral special that is invincible that drains your life, but when you're surrounded, that's the best solution most of the time. [The other option] is the throw move. Most of the throw moves are invincible. If you grab an enemy, you can do the throw move that's going to be invincible. Also, jumping: when you jump, you're harder to hit. Depending on the character you play, you're going to have different moves that are useful as defense, but most of the time, attacking is defense. For example, jump kick: it allows you to avoid attacks and push enemies without doing a lot of damage.

I remember in one of the games Axel had a very unique burning knuckle move that was just more powerful and I'm trying to remember what it was and if it's in Streets of Rage 4.

The Grand Upper? Yes, that's a move for Axel.

Is it still a double-tap forward dash and attack?

Yes. That's a beat move and every character has one.

I've been asking all of the developers this, but, what's your take on the next generation of consoles?

I don't need more power to do a 2D game than the power that's here now. I don't know how I would use it. Maybe multiplayer capabilities for 2D games? Maybe being able to choose your controller. I don't know what next-gen would bring for 2D games.

What's the release window in mind for Streets of Rage 4?

Do you have a price in mind?

How about a physical release?