It was yesterday that the new iPhone 4 was released to the public, streets were flooded with 100's if not 1000's of fans ready to buy Apples next top of the line phone. But to their utter disappointment they discovered that placing their hand on the left side of the phone can annihilate your signals for a short period of time and is reportedly leading to calls being dropped, (Yeah who doesn't hold their phones by the sides during a call?) An email was sent to Steve Jobs regarding this issue, all the CEO had to say was

Just avoid holding it in that way

What a reply indeed I get better replies from fruit vendors when ever I find a rotten fruit snuck in to my shopping bag (no seriously what an awesome reply), It's clear now that Jobs could give a crap about the after product instead of an appropriate response such as "We are working on fixing the issue" all he has to say is that stop holding a phone like a phone. 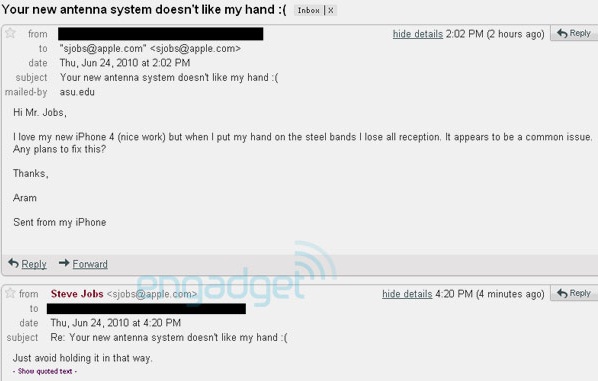 The only solution I see is that you balance the phone on the right side while making a call or getting a bluetooth headset for your phone. Its clear that Jobs is aware of the issue but he could more likely care less about it, its a fact that these iPhones will be sold in millions within a matter of days even though news of this and many other issues is spreading like wild fire through out the net people are blindly spending money on this phone with out even knowing if this issue is planning on being resolved or not.