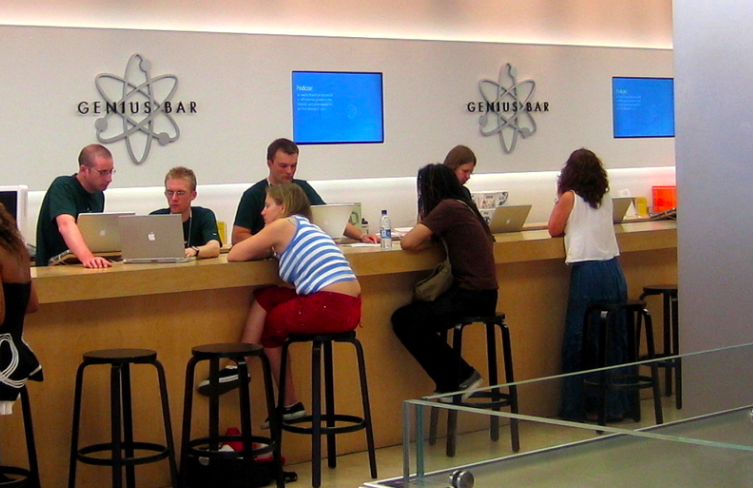 Apple Stores have a knowledge corner known as "Genius Bar" that has been praised by consumers as it helps them with a lot of queries regarding Apple products and their compatibilities. However, until now, we didn't know that Steve Jobs found the idea of the Genius Bar "idiotic" when former Apple Store chief Ron Johnson presented it to him.

In an interview with Recode, Ron Johnson opened up about his experiences at Apple and how Steve Jobs dismissed the idea of the Genius Bar when he came up with it. Johnson shared his instances with Jobs when he was asked to help with the setting up of Apple Stores. Jobs wanted Johnson to prepare the layouts and designs for Apple's retail planning.

Reminiscing the instances, Johnson talks about how Jobs asked him,“Why don’t you write down what you would do? How would you approach retail?” After going through Johnson's thesis, Jobs didn't like it very much, but that day he did hire Johnson.

Johnson's idea for Apple Stores was to create something bold and unique. Other than showcasing the products at the store, Johnson also wanted to have a section to enlighten customers about the products and how they can use them. He remembers how with the help of Jony Ive and Jobs, the team arranged the store setup consisting of a table and glass staircase, which later became the ultimate design inspiration for other stores.

Johnson's idea behind the Genius Bar was to create an enriching experience for customers. He wanted to "create a place that is really friendly…that they just dispense advice”. However, his idea did not go down well with Jobs. Remembering the day, Johnson recollects:

“I remember the day I came in and told Steve about the Genius Bar idea, and he says, ‘That’s so idiotic! It’ll never work!’” Jobs’ reply was,”I’ve never met someone who knows technology who knows how to connect with people. They’re all geeks! You can call it the Geek Bar.”

Regardless of his thoughts, Jobs still went ahead with Johnson's idea and filed for the ‘Genius Bar’ trademark, the next day. You can watch Johnson's entire interview here.

Fast forward today and the Genius Bar is one of the most attractive features of the Apple Stores. Apple has more than 500 stores across the world, and the company is planning to come up with more stores this year.