Even though Steam still isn't used by everyone, it does allow us to see a majority representation of the different pieces of hardware used by a large portion of the gaming community. It seems that the utility of Steam gives us the opportunity to delve deep into some interesting statistics. 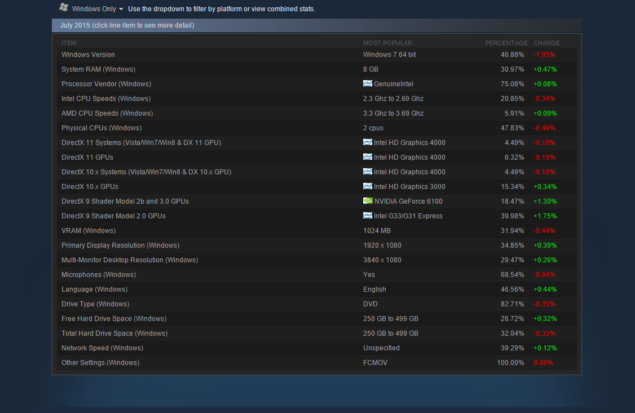 Steam Hardware Survey continues to not surprise with results.

One of those stats is that 1080P is the most used resolution among those that use Steam with a 34.72% share. The next most used resolution is 1366x768 with a 26.61% slice of the pie. Why such 'low' resolutions? That's actually likely due to a number of different factors, the more probable being that Steam is installed frequently on laptops with low resolution screens.

To further add evidence to such a theory, the Intel HD 4000 is still the most popular GPU that's reported by Steam. It comprises 6.32% of the user-base, with the GTX 970 trailing at 3.85%. Again, that could mean that it's reported by all Sandy Bridge CPU's as being installed, but could also, again, the result people using laptops for gaming. Very curious, no?

And, just in case you were indeed wondering about the adoption of Windows 10. As of this particular Steam survey, Windows 10 64Bit enjoys a 2.31% install base among Steam users. Not bad considering that by the end of the month it had only been released officially for a few days.