Valve has released their now-traditional Steam Year in Review for 2020, and surprise, surprise, it was a very good year for the PC gaming platform. Buoyed by increased interest in gaming due to COVID and big releases like Cyberpunk 2077, Steam boosted its sales by 21 percent compared to 2019. And people were definitely playing those new games they bought, as Steam surpassed 120 million monthly active users in 2020, making it the biggest traditional gaming platform in the world (by comparison, PlayStation has 107m MAU and Xbox Live has 90m). You can check out a couple other key stats, below. 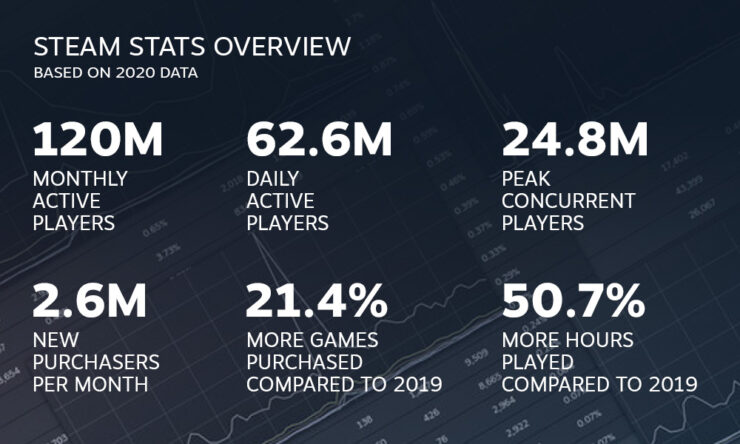 All these people playing games on Steam meant Valve was dealing with a lot of data in 2020 – 25.2 exabytes worth of downloads to be exact (an exabyte is the equivalent of a billion terabytes). They also set a new download traffic record of 52tbps. It wasn’t just that were more people playing games via Steam, they were also playing in new ways. 1.7 million tried out SteamVR for the first time, and a growing number of players, around 47 million in 2020, played a a game using a console-style controller.

Of course, part of the Steam Year in Review is looking forward to the next year, and Valve outlined a few goals, including officially launching in China, introducing new user experience improvements, and continuing to invest in Linux gaming…

What was your Steam experience like in 2020? What would you like to see Valve focus on in 2021?