Yesterday Bruce Maclaen, the senior producer of Star Wars the Old Republic from BioWare, posted a general overview of the direction that Star Wars the Old Republic is set to take in 2015. The "Producer's Roadmap 2015" also mentions the events of the previous year such as the release of Rise of the Hutt Cartel, Shadow of Revan, the controversial overhauled class system and expanding the various flashpoints with regular story updates. 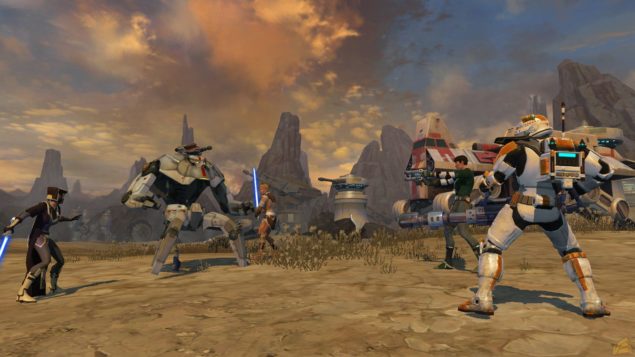 Star Wars The Old Republic is committed to release more updates and expansions throughout 2015.

Bruce Maclaen was quick to point out that Shadow of Revan was only a preview of things to come and that development would most certainly not waiver for the new year. He seemed to acknowledge the deviation from the root the Star Wars-esque story they had originally created and has mentioned that they will be returning to some more familiar elements.

"You’re going to see a unified story, with a focus on themes that unite our eight classes – everyone is a veteran from the Galactic Civil War with a complicated past and an uncertain future. You’ll see a greater emphasis on your character’s personal history, and on the choices you make."

So it should have a classic Star Wars feel to it. Emphasis on should. Specific details and assurances of course can’t be made this far out.

Game Update 3.1 is schedule for release on February 12th and should bring with it two new Hard Mode Flashpoints, Blood Hunt and Battle for Rishi, as well as signify the start of the 4th season of PvP. Update 3.2 is set to come out this spring with a new “outfit designer” and a completely new story arc that centers around the planet Ziost. Apparently the cliffhangers from the end of Shadow of Revan should be answered in this story arc. Brian Maclaen mentions a “Beyond!” category of pending updates that includes a new stronghold, of course, and even a playable Togruta character.

All of the above changes to the game in 2014 were received with mixed feelings by reviewers and the gaming community alike. It seemed that the two expansions didn't really give a true differentiated and character driven experience that was first found to be a hallmark of the games original story, and they didn't seem to add any elements that were distinctly unique or perhaps even worth continuing as a subscriber. Strongholds haven’t been as popular as the developers would like either, even with the Coruscant stronghold being free to all players. As a base of operations for your legacy they seem incomplete at the moment. But that doesn't mean that Star Wars the Old Republic isn't played and enjoyed by those that play it either. The numbers themselves aren't available, but logging on to your favorite server during the usual busy MMO times will reveal a healthy player base in most instances. That and the original story arc for each character really is engaging and fun, and has even brought myself back to start new characters in order to see what new elements are offered.

Personally I hope they can deliver on their promises, and professionally I think that they have a percentage chance of doing so, but have to maintain an even direction throughout their development of these new elements to do so. I like Star Wars and hope that more gaming content is available in the future. There used to be a plethora of good games to play.