Developer DICE has made their Star Wars Battlefront App available for Android and iOS. The companion app allows players to earn in-game credits, which can be spend on weapons, star cards and more. 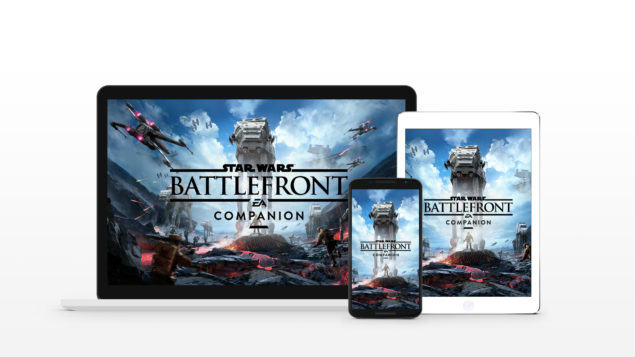 Following the Fallout 4 Pip-Boy App, now also EA DICE has released an app for their upcoming shooter. Although the official Battlefront release is still 7 days away (EA Access subscribers can try the game in 2 days), fans can already enjoy some Star Wars action through the card-driven Base Command game, available within the Battlefront companion App.

The companion app is available for both iOS and Android:

Some of the features of EA DICE’s Battlefront companion App:

BASE COMMAND
lay this strategic Star Wars™ card-game anytime, anywhere to earn Credits for Star Wars Battlefront. Use your Star Cards in Base Command to advance to new sieges as you take on increasingly powerful Imperial forces.

STATS & PROGRESSION
Get a complete overview of your Star Wars Battlefront career and learn what’s left for you to complete. Also included is a visual overview of how you’re doing, where you can dig down into the nitty gritty details of your performance.

STAR CARDS & BLASTERS
Marvel at your collection of unlocked Star Cards and Blasters, and use hard-earned Credits to unlock and upgrade new ones. Customize your Star Card hands to fit your play style and keep you ready for battle.

STAY CONNECTED
See your PSN, Xbox Live, or Origin friends in real time and get notified when they start playing Star Wars Battlefront. You can even check out their game progress and stats to see who is the best soldier in the galaxy!

Star Wars Battlefront released on November 17 for PC, Xbox One and PS4. Subscribers to EA’s ‘EA Access’ are able to try out the game on November 12.