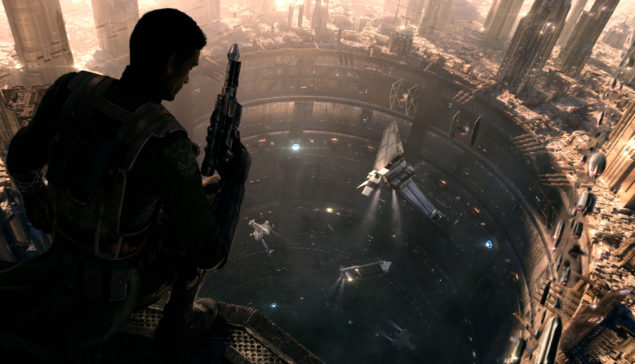 Star Wars 1313 was announced in 2012, and was cancelled a year later, resulting from Disney's buyout of Lucasfilm Games. The game was supposedly an open-world adventure set in Level 1313, an underground den found in  Coruscant. It was confirmed after the cancellation that the protagonist of the game was indeed non other than Boba Fett.

Hennig was the lead writer behind the critically acclaimed, Uncharted series. EA could have very well changed their mind after Hennig left Naughty Dog, and resurrected the project.

The description for Star Wars 1313, was as follows:

Star Wars 1313 will feature epic action adventure game play including exotic weaponry and gadgets that bounty hunters depend on for survival. In addition, the game will feature a combination of agile cover-based combat, epic platforming and seamless playable cinematic game play. Players will experience awe-inspiring and action-packed cinematic sequences, constantly staying engaged through the threat, pressure and tension of this criminal underworld.

Star Wars 1313, created an extremely large amount of buzz, when it was first revealed, with an exemplary amount of visual fidelity for the time, and a look and gameplay style reminiscent of Uncharted. Who better to create an Uncharted Star Wars game than the actual person who wrote Uncharted?

Rumors can be wrong, and Amy Hennig could be working on an entirely different project, completely unrelated to Star Wars 1313. It would be quite a shame though, as the concept does sound extremely promising. Disney/EA would be smart to bring the game back, given its positive buzz, already in-progress development and as a handy marketing tie-in to the Christmas release of the new Star Wars movie, The Force Awakens.

Regardless, Amy Hennig is an incredibly gifted writer, and whatever project she is involved with, it will likely turnout to be great. We will bring any more information regarding EA's Star Wars projects, as soon as it becomes available.