The Star Trek Online community and their developers truly know how to pay tribute and respect to those that have helped it to even exist. 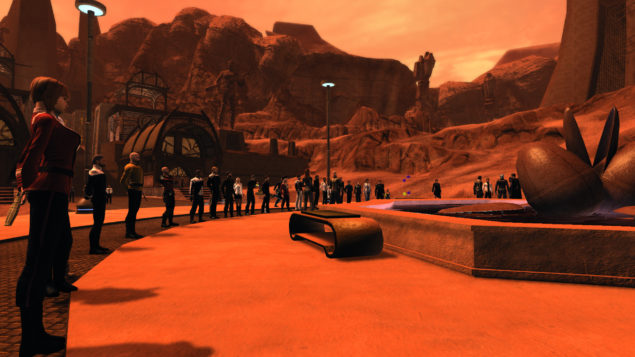 An unofficial gathering of over 1000 players in the game traveled to the planet Vulcan in order to pay their respects. While the people were broken up into separate instances of around 15 or 20 or so, the total population of players was around 1000 total. A Reddit user, MrMorlonelycat was able to take a very telling screenshot of players lined up around a monument taking a moment of silence.

In response to the overwhelming gathering, Star Trek Online developer, Cryptic Studios, has decided to erect an official monument to honor Leonard Nimoy. The monument will appear on March 5th as part of the regularly scheduled maintenance. The executive producer of the game, Steve Ricossa, said that this is a way to keep his memory alive.

"In this way, we hope to keep his memory as alive in our game as he is in all of our hearts, LLAP."

Leonard Nimoy has had a profound impact on a lot of lives, even those that aren't even interested in his works. He also was able to provide narration for the Star Trek Online MMO and even helped to introduce it at a ceremony in August of 2008 in Las Vegas.

While it may seem a bit silly in nature, the gesture itself is very well intended and speaks to how we deal with loss. We valued his, and all, life and sometimes we may need a way to express that. Even games can provide that outlet, and Star Trek Online recognizes that, even though the active player base may not be that high. It's a fascinating and most heartwarming gesture. Even though it's an MMO and a game, it's rather fascinating, and very much logical.