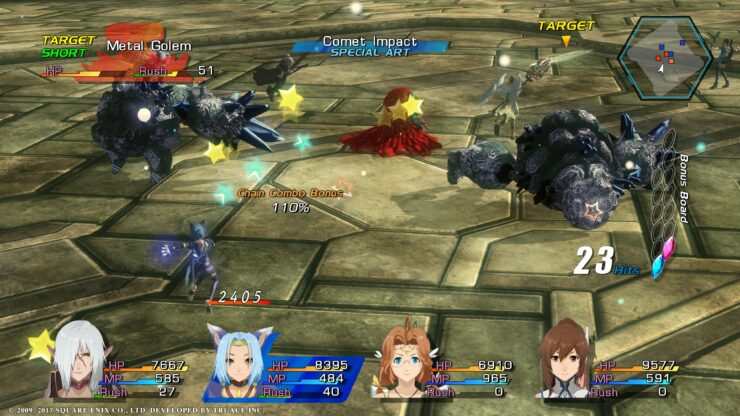 Star Ocean The Last Hope 4K And Full HD Remaster, the remaster of the fourth entry in the series developed by tri-Ace, is now available on PlayStation 4 in all regions, and it's been confirmed that the game comes with a nice amount of graphics settings, which is unusual for a console game.

The Star Ocean The Last Hope 4K And Full HD Remaster graphics options, which are the same on both PlayStation 4 and PlayStation 4 Pro, allow players to adjust Shadow Buffer, Camera Bluer, Depth of Field, Self Shadowing and more. The game also allows players to choose between low and high resolution Textures.

With the Steam release only coming in a few hours, it will be interesting to see if the PC version will come with additional options or with the same ones seen in the PS4 release.

Other than the additional graphics settings, Star Ocean The Last Hope 4K And Full HD Remaster will come with all the tweaks included in the International version.

The year is A.D. 2087. In the aftermath of World War III, Earth has been ravaged and the population decimated by a deteriorating environment. The countries that survived have joined together to form the Greater Unified Nations and turned their eyes skyward…to space. Edge Maverick and his childhood friend Reimi Saionji are chosen as pioneer members of the Space Reconnaissance Force, which was created to seek out new worlds beyond the stars. Their ship, the Calnus, takes its place on the lunar launch pad along with four other starships of the first reconnaissance fleet. These ships – humanity’s last hope – blast off one-by-one and sail into the awaiting wormhole that leads to the vast star ocean. And so, Edge and his crew begin their voyage in search of a new haven for humanity…and a second chance.

Star Ocean The Last Hope 4K And Full HD Remaster is now out on PlayStation 4 in all regions. It will launch later today on Steam.