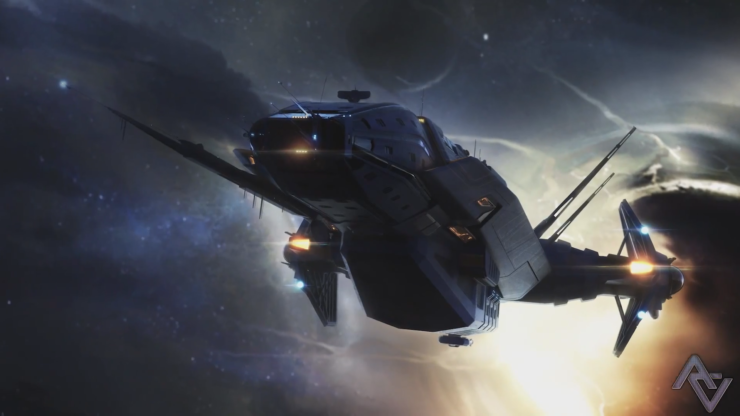 It’s the annual Star Citizen CitizenCon event time and this year we’ve got some exciting news lined up for anyone that is busy and can’t watch the livestream. We’ve been given early information about what’s coming out from the show by Cloud Imperium Games so can give you all the juicy details as things get unveiled. First up, we have the opening keynote details and it’s a stunning set. We have, the long awaited Anvil Carrack in game! The Carrack is one of the larger ships, the pinnacle of the exploration tree of ships (currently) and is supposed to be able to spend extended periods of time in space with advanced sensor equipment for finding and navigating new jump points (rumoured to be more on this later in the show!)

The player wakes up in the Carrack and we get a tour of the ship. Included here is what some long-time fans of the game will know: the Anvil Pisces is a small explorer which launches from the Carrack’s hangar bay. Keep in mind that the Star Citizen universe is supposed to have jump points of varying sizes so the Pisces may be useful once jump points appear in game… if the Carrack proves too big to be able to navigate a smaller jump point.

The ship itself is beautiful and the attention to detail is stunning, like so much else in Star Citizen. We then have the mic drop moment where the player gets into the Pisces and launches to fly down to…

The Pisces is a small ship and we get the traditional descent into atmosphere (more updates on atmospheric flight later!) to the New Babbage landing zone. microTech is (like all Stanton planets) the name of the corporation that in lore purchased the planet from the UEE. microTech is one of the megacorporation’s of Star Citizen and produces the ubiquitous mobiGlas wrist computers which provide mission/inventory management systems that all players use.

The landing zone we fly into is New Babbage and we’ve had some sneak peaks of it in the whitebox stage earlier this year while it was being built out. The story is that the UEE’s terraforming didn’t work correctly so a large, centralised, domed structure was created and it has a kind of greenhouse feel to it with plants etc as the player walks around the landing zone. CIG will no doubt have all the video footage from the event up at a later stage but have a look at the embedded video below for a sense of what New Babbage was built to look like.

Walking around microTech, the player meets an NPC and accepts a mission. The release is due soon and will include the straight to flyable Pisces which players who don’t have a Carrack (anyone that already has a Carrack on their account will have the Pisces included) may be interested in. Remember, nobody needs to pledge for anything other than the base game to play Star Citizen and particularly now that ships are available in game.

Star Citizen is having a free fly from tomorrow so new players can try the game out for free here. There is also a new welcome hub where players can get some tutoring from other players if they wish here.