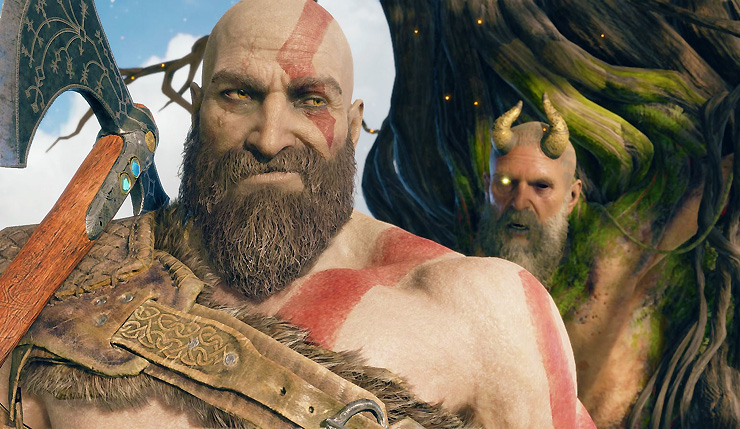 Sony Santa Monica recently shared an interesting infographic detailing the God of War heroics made by players since the game's launch in late April.

About a half million users have managed to unlock the Platinum trophy. Players died a grand total of 690 million times and almost 95 million of these deaths happened in the toughest difficulty mode (Give Me God of War).

The most popular equipment pieces for Kratos were the Runic Wyrmskin Pauldrons, the Plated Runeweaver Bracers, the Runeweaver War Belt and the Talisman of Resolute Protection.

For the Leviathan upgrades, folks favored Hel's Touch and Ivaldi's Anvil, with a total of 1.4 million players having fully upgraded the axe wielded by Kratos. On the other hand, the most popular Blades of Chaos abilities were Spartan Charge and Tartarus Rage, while 1.6 million players have polished the Blades to their maximum.

When it comes to Atreus, the Legendary Runic Vestament was the favorite armor while gamers preferred the Wrath of the Wolf as the Summon ability. 828K players fully upgraded his skills.

Lastly, the infographic points out that Sigrun, the Queen of the Valkyries and considered to be the toughest boss fight in God of War, killed players 24-to-1 on average. The easiest mode saw a 12-to-1 ratio, the normal mode jumped to 34-to-1, the hard mode got even higher with 36-to-1, but the toughest mode (Give Me God of War) registered an incredible 100-to-1 kill ratio for Sigrun.

God of War also got the highly requested New Game Plus mode a short while ago. Below you can find a list of features and improvements introduced with the latest title update.

1) Relive the adventure of Kratos and Atreus, while keeping all of your earned equipment and abilities. Start a new game with all of your armors, talismans, enchantments, Runic Attacks, skills, and yes, even weapons. [NG+ ONLY]

2) NG+ is for everyone! Upon starting a NG+ game, you will be able to select your desired difficulty – no matter which difficulty you picked for your previous playthrough. Enemies will be levelled up accordingly, so choose the amount of challenge which suits you best. [NG+ ONLY]

4) Forge a handful of new armor sets for both Kratos and Atreus, including some with exciting brand new gameplay abilities such as a chest piece, which creates massive explosions whenever Health or Rage stones are stomped on. [NG+ ONLY]

5) Push the boundaries of combat by converting certain talismans and armor sets into enchantments, creating combinations which are not possible in a standard playthrough. [NG+ ONLY]

6) Enemies can now turn elite even on “Give Me a Challenge+” difficulty. Add a new dimension to combat, even if you don’t want the ultimate challenge on “Give Me God of War+”. [NG+ ONLY]

7) Some enemies have new behaviors and attack patterns. Maybe you should see how you hold up against the Valkyries this time around? [NG+ ONLY]

8) Test your skills on timed Realm Tears. Running away won’t help you against Hel-Vikens and Revenants (once you open a rift) anymore. [NG+ ONLY]

9) Receive a brand new shield skin when starting a game on NG+. Unlock an additional one by completing NG+ on “Give Me God of War+” difficulty. [NG+ ONLY]

10) Repeat the New Game Plus experience as much as you’d like by starting another NG+ game from one you’ve just completed. [NG+ ONLY]

11) Engage the story the way you want to. Skip cinematics as you please on both standard and NG+ playthroughs by completing the story at least once. Experience the scenes again to catch secrets you might have missed, or simply jump right back into the action.

12) Switch out your armor pieces as much as you like without worrying. Easily transfer all enchantments from one piece of gear to another in the menu with the push of a button.

13) Many bug fixes and quality of life improvements, such as ensuring that Parry Attacks keep Kratos safe at all times, improving the Wrath of the Frost Ancient Runic Attack, fixing inconsistencies with how enemy attacks can be parried, and much more.