Square Enix made an announcement today on Twitter, teasing Project CKP, an interactive showcase from one of their Western development teams. The project will premiere on Twitch next week, and it seems that Square Enix have a game in the works and are ready to showcase it. Square Enix also tweeted the picture below with the announcement.

Join us on Twitch on Monday for a unique 3-day interactive experience from one of our Western studios. Don't miss it! pic.twitter.com/tRqEBxSkS4

The reveal will be made on Twitch on Monday 6th April and is being described on Twitter as a 'three day interactive experience'. 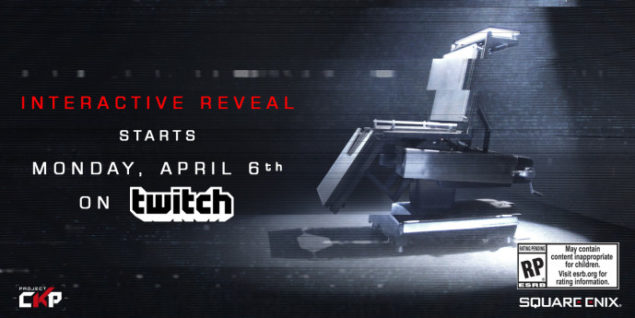 What could be coming from Square Enix?

The announcement could be regarding Deus Ex Universe, or a new Sleeping Dogs and of course there is a possibility of a new Hitman game. The dismantled chair seen through a surveillance camera could indicate a Deus Ex game.

The possibility of a remaster for PlayStation 4 and Xbox One is also at play, as is the chance of a completely new IP. Lets hope that something exciting gets revealed and we don't end up disappointed. There are so many exciting prospects that it would be shame.

We will bring you any new information regarding Project CKP, as soon as it becomes available.