Yesterday, Square Enix (TYO:9684) revealed their financial results for the first half of the 2019 financial year and the figures aren't great. The poor performance from the first quarter that I covered around three months ago has continued. A huge extraordinary expense of ¥3.733 billion has been left as a result of "an in-depth review of the business strategy for a wholly-owned subsidiary, Luminous Productions Co., Ltd."

With only one exception, publication, Square Enix has taken a significant year on year fall in both sales and profits. Overall, net sales for the six month period came in at ¥112.23bn, a not-insignificant YoY fall of 15% from last years ¥132.04bn last year. Operating income took an even higher, 61%, YoY fall from last years ¥25.81bn to this years ¥10.07bn.

Even discounting the extraordinary loss related to the restructuring of Luminous Productions Square Enix would have still seen a significant fall in operating income. This can be primarily attributed to the fall in sales and profits across Digital Entertainment, which covers sales of HD games, MMO titles and mobile & browser games.

For HD games, sales of ¥24.1bn were realised in the second quarter, a ¥3bn fall from last years second quarter. ¥2bn in profits were shown. This is a significant improvement on the first quarter which saw a year on year sales fall of ¥4.7bn and realised no profits. The boost can be attributed towards the two major releases during the first half of the year, these being Octopath Traveller and Shadow of the Tomb Raider

In addition to expenses related to Luminous Productions, other expenses were realised as a result of advertisements for future titles like Just Cause 4 and Kingdom Hearts 3, both to be released within the next two months. This should help to boost the second quarter, particularly due to the release of Kingdom Hearts 3 which is one of the companies most anticipated titles in a reasonably long time. 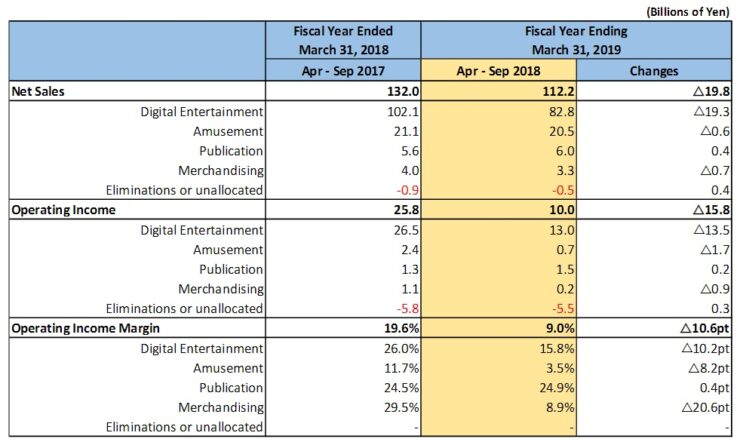 Outside of HD games, the company has truly seen a slump in game releases. For MMO's no expansion has been released since Q2 of the previous year and as such, sales have suffered. While sales have been level from Q1 to Q2, income is on a steady decline. There is no release planned for Q3, which will further affect sales and operating income.

As for mobile and browser titles, much like with MMO games revenue has remained level, though with a slight fall in operating income. Square Enix had this to say about the segment:

In the smart devices and PC browser area, most of the titles launched in the prior fiscal year performed below expectations and failed to generate additional revenue on top of that from existing established games. A decrease in licensing income also contributed to a year-on-year decline in net sales and operating profit.

Away from Core Games: Performing Better but Too Small

Much like what I covered three months ago, the more productive or stable areas for Square Enix have been those away from core games. Amusements, for example, has finally seen a turnaround. Following three consecutive quarterly falls in sales, sales in Q2 hit ¥11bn, with operating income rising too.

Even YoY H1 comparison only shows only a slight fall from ¥21bn sales last year to ¥20.4bn this year. The turnaround of sales, with them finally rising, should prove to be a positive point for the company in what is a relatively bleak Q2/H1. 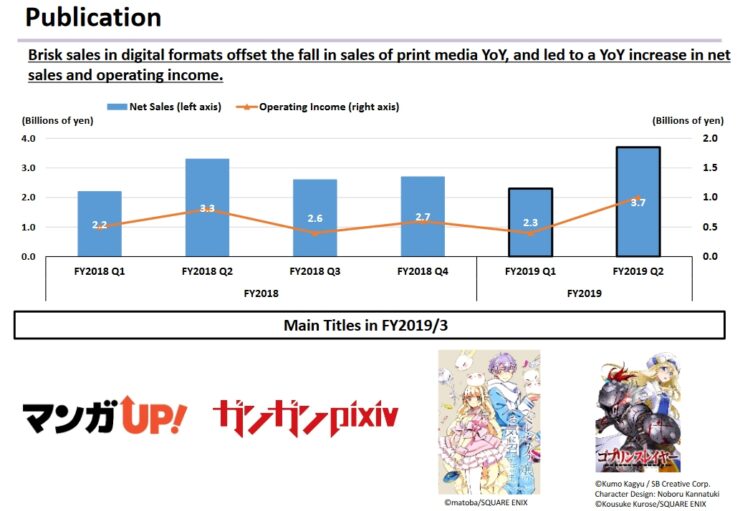 One area that has seen a boost is publication. This segment deals with the manga of Square Enix and it has seen a significant jump in revenue in profit, particularly over the first quarter of the year but also one of the few areas to see a YoY rise in both sales and operating income. This has been attributed to digital sales, despite a slowing of hard copy products.

In the Publication segment, sales of comic-books remained brisk as growth in digital formats offset a year-on-year decline in paper-media sales.

Merchandising, the last of the segments, remains stable. Sales came in at ¥1.8bn, matching the same quarter last year, with H1 sales coming in at ¥3.2bn compared to last years ¥3.9bn. Operating income has remained stable over the quarter, despite an increase in sales. Much like in the first quarter, Square Enix seems to be in a slump and remaining there.

Planning for a Digital Future

One way in which Square Enix is hoping to reverse the fall in operating income and increase their income margin is by adopting a subscription model. Although it's only just been mentioned so no information has been given, it's easy to imagine the form this will take. Likely, subscription models like Electronic Arts' (NASDAQ:EA) Origin Access or Microsoft's (NASDAQ:MSFT) Xbox Games Pass will influence whatever Square put out.

This could likely prove to be a strong feature for the company if they include all titles, including MMO games, though only time will tell on that note. Following the "reviewing of Luminous Productions" what the company truly needs to work on is releasing games in a more timely fashion.

It's become common knowledge that Square Enix titles balloon out of control, with ever increasing budgets and time wasted on ostentatious new engines or features - something that has seemingly plagued the Final Fantasy VII remake as well as most other titles. One can hope that this is the start of a new way of thinking with the company, one that will lead to future success. One that starts with Just Cause 4 and Kingdom Hearts 3, plus any other title released throughout the remainder of the year.