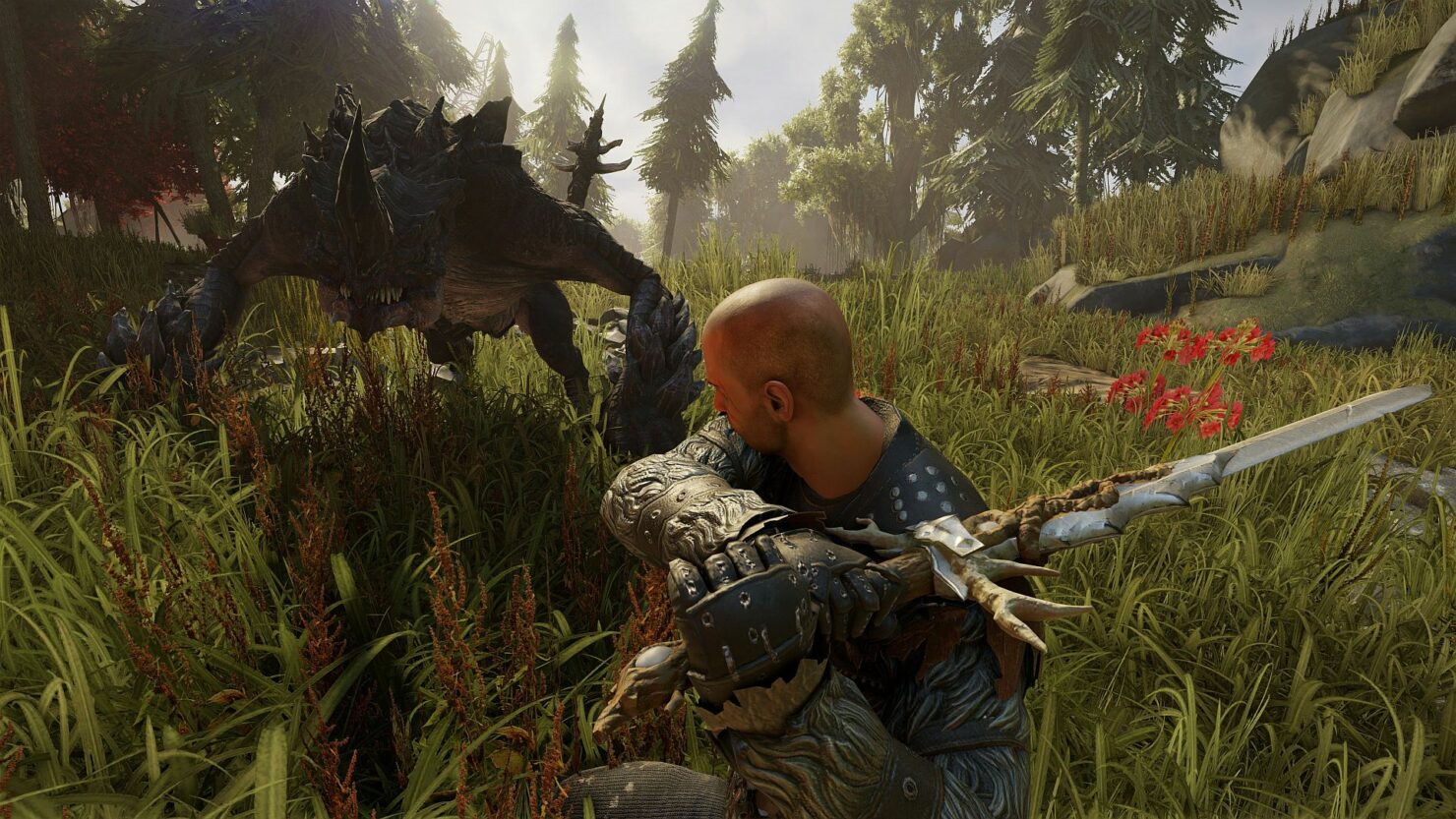 During Pax East 2017, we checked out a couple of games of THQ Nordic’s surprisingly big catalog: ELEX and SpellForce 3, both due in Q3 2017. Let's start with the former.

Developer Piranha Bytes, known for making RPGs like the medieval-fantasy Gothic and more recently the pirate themed Risen series, is taking a crack at making a truly massive open-world similarly to what you’d find in Elder Scrolls: Skyrim or even The Legend of Zelda: Breath of the Wild. Even though this was an incredibly early build of the game, I did get a good sense of the game world’s scope they are shooting for, with environments like rolling hills, ruins and even a large domed city on the horizon. Even though we hear it a lot these days, they told me every part of the world you see can be traversed. Hopefully, Piranha Bytes will make ascending perilous mountains worth our trouble.

You start as a former commander of Albs, a military force that consumed a rare substance known as ELEX. What ELEX does is gifting magic-like powers, but also stripping the user of all emotion. Albs forces would use this to make cold logical decisions without the inconvenience of emotions.

For the first time, ever, your character is let loose in the world without ELEX after a mission gone bad. Story wise this means that you can make any decision you want in regards to quests, as well as killing almost any NPC and the story will adapt accordingly. This was pointed out when I was accepting a quest from a well-armed NPC. I could have just murdered the guy and took his gear but it would have also removed that quest chain from the game. It wasn’t clear on how much killing certain characters will affect other quests later in the game, but it’s something to keep in your mind.

There’s no distinct good or evil choice in the game, but instead follow a set of emotions like joy, anger, wise, or cold. Think of the responses in Dragon Age: Inquisition that follow a similar template.

ELEX wouldn’t be much of an action-RPG if it didn’t have a healthy amount of combat. Since the setting is a post-apocalyptic future, weapons will range from flaming broadswords and crossbows to more sci-fi armaments like plasma rifles and the devastating flamethrower. Throw in a jetpack and ELEX opens combat in a fun new way, for instance with a skill that lets you hover over a bandit and then slam down on him with the flaming sword. Of course, the jetpack also comes in handy to move around the world.

Another fun tidbit about ELEX is that there are going to be Companions who will travel alongside you and comment on your actions. Players must also choose a faction that will greatly affect your notoriety in the world. ELEX seems like a massively ambitious undertaking that could easily grab 80 hours of your life in a curious violent world; let's just hope Piranha Bytes can release it relatively bug-free unlike Gothic and Risen.

ELEX is coming to console (PlayStation 4 and Xbox One) and PC.

Fans of fantasy RPG/RTS hybrid SpellForce will be happy to see that progress for SpellForce 3 is coming along well. The demo I was shown took place in the war-torn world of Eo where we needed to command a small army to save the world.

We started off by constructing a base and establishing our economy early by assigning workers to gather resources before building up your forces. Grimlore Games is hoping to streamline the micromanaging process by having workers perform the labor without the need of issuing an order once they are tasked to build something. This means your workforce will handle gathering resources while you go out and fight. The other part of the formula comes in how you venture out into the world with your army. You’ll have access to several hero units who can be leveled up and customized along with more disposable units you’ll ultimately use as cannon fodder.

We ordered our forces to take down a neighboring base that was overrun by zombies. You could, like in any other RTS, spend the resources to just overwhelm your enemies. The early game will require making serious choices in how to spend your limited resources. Instead, we leveled up one of our wizards with a deadly fireball that would make short work of the pack of zombies that could have otherwise taken out a fairly significant number of our units.

There are also little points of interest on each map that will give you an edge in battle. One such point was a shrine that, once captured, would produce a small horde of zombies to fight on your side.

Once clearing them out we could expand our territory, adding to our economic growth. The plan is to take over new sectors with new bases that have their own independent population limits. To share resources between bases you’ll have to send goods via carts. Striking a good balance between cash flow and a sizable army is paramount to success.

SpellForce 3 is shaping up to please veterans of the series while making it more approachable to newcomers. It will launch on PC.