Were you alone this Valentine's day? If you are looking for love to bring happiness in your life, a new online dating service known as SparkStarter is launched this week which assures to help singles find someone with a minute amount of help from their beloved friends. 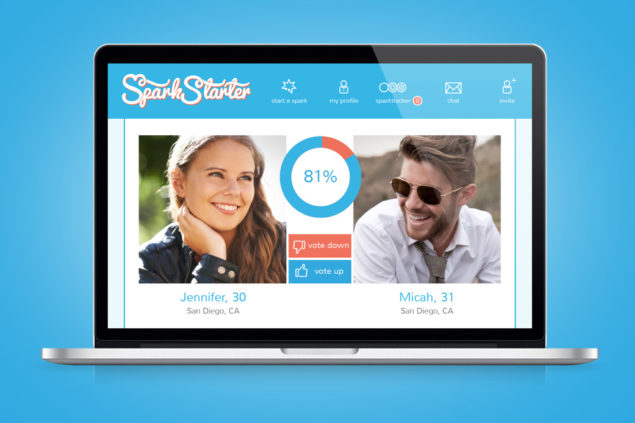 Rather than using traditional online dating Apps, SparkStarter brings in a new way for Matchmaking

"Starting Sparks is all about making the initial introduction. A Spark is something to get a relationship going. While we use Facebook information to provide hints on whether two people might be good for each other, we also encourage friends to influence the match by voting up, which increases the compatibility score of the match. We hope to start Sparks for two people so that they can turn the Spark into something more".

This App seems to be promising in the long gone list of sites claiming to find a perfect match for you. SparkStarter uses the ancient art of matchmaking to make and build relationships which is contrary to the traditional ways of online dating such as eHarmony and Tinder. The traditional online dating used to have a single viewing profiles which solely allow the users to make their own self assumed judgement in order to judge who can be a right partner for them.

This app works in a completely different manner, because once you start using this app, you need to first sign in through Facebook and by doing that, SparkStarter pulls off the relevant data of your friends and their friends in turn in order to find out the maximum probable matches that can exist. However it goes the same way as other sited such as Tinder while you are searching for and indicating whether the match suggested by the app works out for you or not. This goes without saying for people who are single and ready to have a partner in their long lost lively life.

The way SparkStarter makes itself stand out in the world full of competitors is by providing a compatibility score. This score is basically calculated through an algorithm that looks out for things such as age, relevant interests, the number of mutual friends people have; the information pulled off through your Facebook account including your "Likes and About" section. However it doesnt relate people according to their locations unlike Tinder and other dating websites.

SparkStarter’s CEO Tony Kramer established the idea of this App back in 2009 after a discussion with his friend about having someone he must have liked out of so many friends on Facebook. So after Kramer married to a woman he was matched with, he finally decided to have a digital App for this purpose and hence SparkStarter was born. SparkStarter is basically a Minneapolis-based company that raised an approximate of $450,000 from its founder and some unnamed investors in San Francisco up till now. This app is free for Android and iOS containing devices and is launched last Tuesday.