The National Aeronautics and Space Administration(NASA) today announced new contracts as part of its Tipping Point contract awards. These awards focus on the development of commercial space technologies to aid. the agency in its future missions. They come at a time when NASA is gearing up for its Artemis program that intends to establish a permanent presence on the lunar surface for the first time in human history, use the surface for scientific experiments and eventually launch missions to Mars.

As part of these awards, SpaceX's Starship launch vehicle platform also won an award to demonstrate a key in-flight refueling technology that is at the heart of the platform's operations.

Starship, which is currently under development in SpaceX's facilities in Boca Chica, Texas will replace the company's existing lauch vehicles. Currently, SpaceX relies mostly on the Falcon 9 Block 5 for delivering payloads to the International Space Station (ISS) and Low Earth Orbit (LEO) amongst other destinations. These rockets use the company's Merlin 1D engines with roughly 845 kilonewtons of thrust and a gas generator power cycle.

The Falcon 9 will be replaced by Starship which uses a completely different propulsion system. This system will employ SpaceX's brand new Raptor rocket engines expected to output roughly 2,200 kilonewtons of thrust and a stage-combustion power cycle that is more efficient than the Merlin's.

More importantly, SpaceX also intends to refuel Starship after it has taken off, in LEO through a customized variant. This will enable the launch system to undertake deep space and lunar missions as it will replace the fuel that a rocket needs to escape the Earth's orbit – fuel which forms the bulk of a rocket's weight. 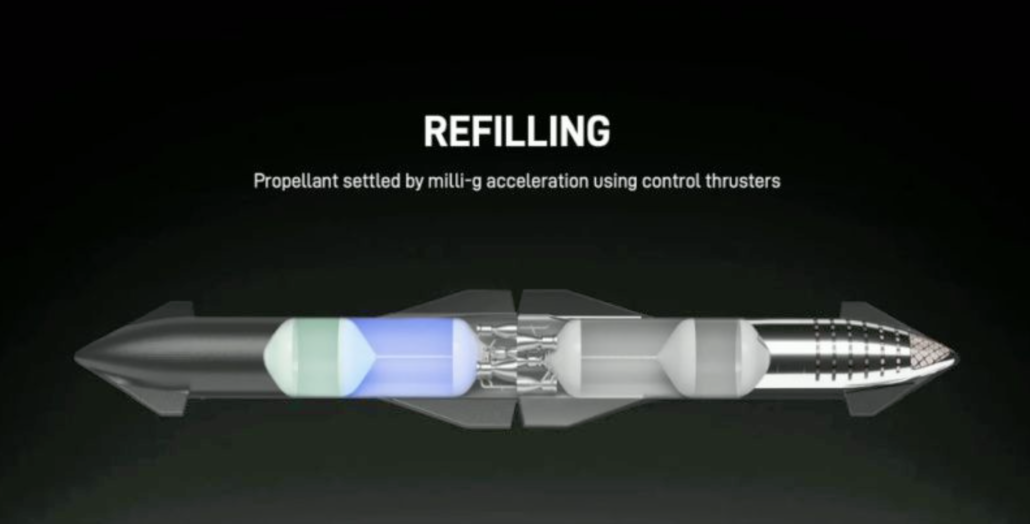 An excerpt from SpaceX's presentation made in 2019 showing its concept of Starship refueling. Image: SpaceX

This refueling system has gained NASA's attention, as the agency chose to include SpaceX in its Tipping Point awards. Specifically, SpaceX has been awarded a $53.2 million NASA contract to transfer cryogenic propellant between Starship tanks. NASA's award description reads as follows:

"Large-scale flight demonstration to transfer 10 metric tons of cryogenic propellant, specifically liquid oxygen, between tanks on a Starship vehicle. SpaceX will collaborate with Glenn and Marshal."

SpaceX uses super-chilled Liquid Oxygen as fuel for its Merlin engines on the Falcon 9 and the company will continue to use this on Starship as well. Additionally, most of NASA's $370 million+ Tipping Point awards deal with fuel management.

NASA Administrator Mr. Jim Bridenstine commented on the need of developing fuel management techniques in response to a question after his keynote at the Lunar Surface Consortium today. The question asked for a timeline for fuel depots in lunar orbit and their drivers, and the Administrator commented:

"Well, I will tell you, I think it will be both. I think to the extent that it will be government users it will be the government as a customer of a commercial provider, as far as those fuel depots go. A far as when they materialize, I don't want to put a date on that but I will also say that when we look at how we are spending the Tipping Point resources, $270 million of the $380 million is focused on the storage of cryogenics in space. And of course when we think about companies like SpaceX and the Starship their architecture is heavily reliant on the ability to transfer cryogenics on low earth orbit for the purpose of taking a system all the way to the Moon. Their system in fact doesn't appear to require a fuel depot around the Moon, their system would require a fuel depot in orbit around the Earth."