SpaceX Launch: How Has the World Changed Since the Atlantis Landed? 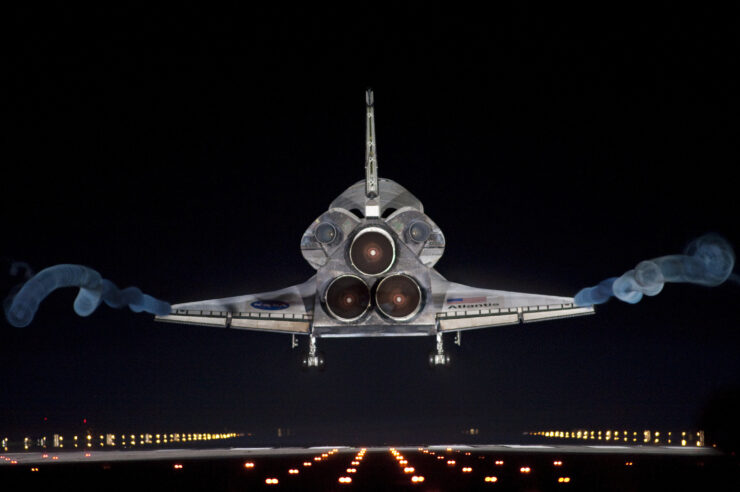 In a few hours, Crew Dragon Demo-2, SpaceX's first manned mission to the ISS, is set to take off from Kennedy Space Center launch pad LC-39A.

This marks a return to manned space flight for the United States, a first since STS-135 landed on July 21, 2011. It's been almost a decade since then, and the world is a very different place between the last time a shuttle landed and this SpaceX launch. So let's take a look at that has changed since the last time the US sent men into space.

1) The Rise of GPGPU Computing: Or How Nvidia's Stock Price Has Been Sent Higher Than a SpaceX Launch

Although CUDA, Nvidia's language to address GPUs for general-purpose processing, has been around since 2007 along the same time that the GeForce 8 series was launched, GPGPU Compute really hit its stride in 2013-2014 and has accelerated from there.

Although readers of Wccftech should know what GPGPU Compute is, for those that don't: it's a way of increasing the computing power available to an application by harnessing the massive parallelism of the GPU. The CPU is able to address the GPU and have it complete tasks in parallel, which is perfect for crunching algorithms and processing big data, or building machine learning code. The big data revolution wouldn't be possible without this added computing muscle.

Fast forward to 2020 and GPGPU compute plays a pivotal role in computing. Thousands of Nvidia Tesla GPU accelerators, or Xeon Phi co-processors, or Radeon Instinct cards power the world's fastest supercomputers such as Summit at Oak Ridge National Laboratory or Tianhe-2 in China. In fact, SpaceX uses GPGPU clusters, and the SpaceX launch wouldn't be possible without them, to compute through its most challenging tasks: compressing the yottabytes (that’s 10 followed by 24 zeros) of data generated by the algorithms used to simulate combustion in the atmosphere.

But, at a macro level, the availability of these cards allows workstations to have enormously more computing power than before.  Machine Learning algorithms mean that autonomous vehicles are soon to be a reality. It enables Nvidia DRIVE to detect stop signs and other hazards on the road. The sheer power now available to the visual effects industry means that game engines can be used to create virtual sets in real-time, as we saw on The Mandalorian.

The necessity of GPGPU computing in powering the modern, data-rich world has driven Nvidia's stock to the stratosphere. 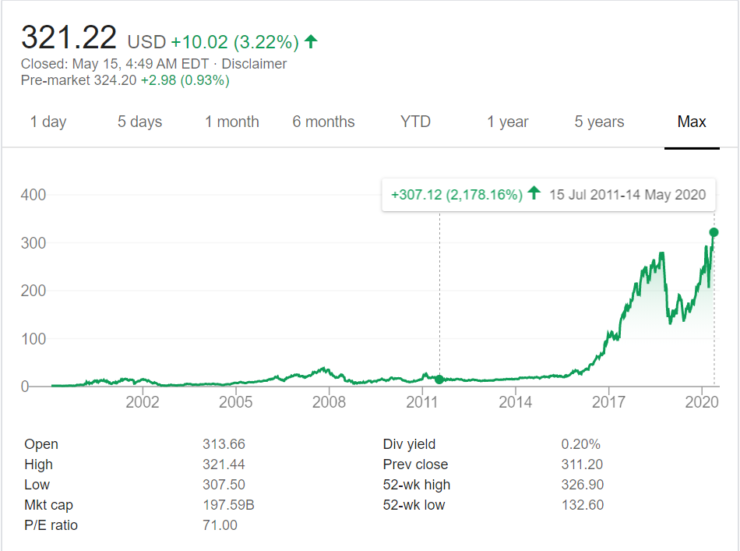 When the US sent men last into space, Nvidia was a roughly $16 stock. Since then it has appreciated over 2,000%.

2) For The Most Part, The Economy Was Awesome

For a better part of the 2010s, the economy was performing on all cylinders. Until Covid-19 reared its ugly head in early 2020 (which thankfully didn't delay the SpaceX launch) the 2010s were defined as the longest bull market in history. Within the US, the unemployment rate declined from a near-record high level (9.5%) in the second quarter of 2010 to a near-record low (3.5%) in the second quarter of 2019. 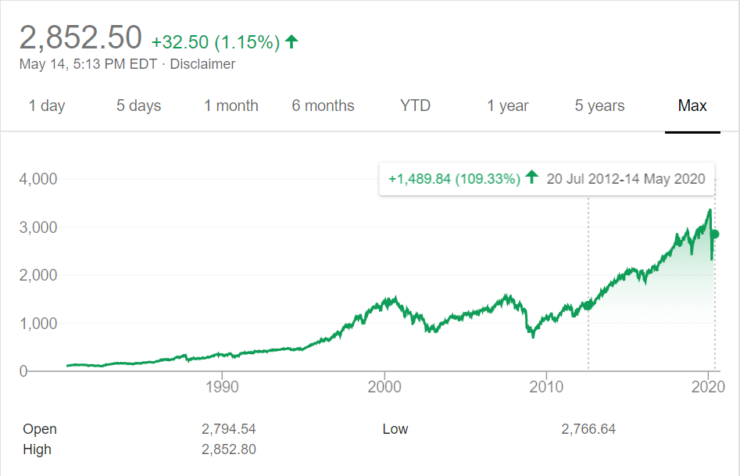 But despite this record rally, and healthy job market, the gains have not been distributed evenly across the socioeconomic spectrum. While the middle class has seen modest growth of 7% in their net worth since 1995, it has not yet recovered to its previous peak in 2007 according to the Brookings Institute. Generational inequality has also peaked, as the price of housing in urban centers continues to rise while, at the same time, student debt skyrockets. Between 2011 and the present, Americans added about $700 billion in student debt, rising from $1 billion in 2011 to $1.77 billion in 2020. Balances of student loans have eclipsed both auto loans and credit cards, making student loan debt the largest form of consumer debt outside of mortgages.

During the last nine years, raw CPU clock speed has become a less important metric to measure the computing power of a CPU. Indeed, if one were to look at the best CPU of 2011, Intel's Core i7 990X Extreme Edition, it would appear that not a lot has advanced. 3.46 Ghz is still a common clockspeed today.

But that would be a superficial analysis; as readers of Wccftech should know, there have been many more advancements aside from raw clock speed.

The beast of 2011, Intel's Core i7 990X Extreme Edition, came with 6-cores, 12-threads. Fast forward to day and 2020's beefiest processor, AMD's Threadripper 3990x, rocks 64-cores, and 128-threads threads of fury. But that's at the ultra-high end. AMD's mainstream Ryzen CPUs have between six and eight cores, and eight to 16 threads. Even a mainstream CPU these days outperforms a high-end chip from 2011, and by a long shot thanks to the inclusion of these cores and threads. The results are clear if you compare the chips on CPU Mark: 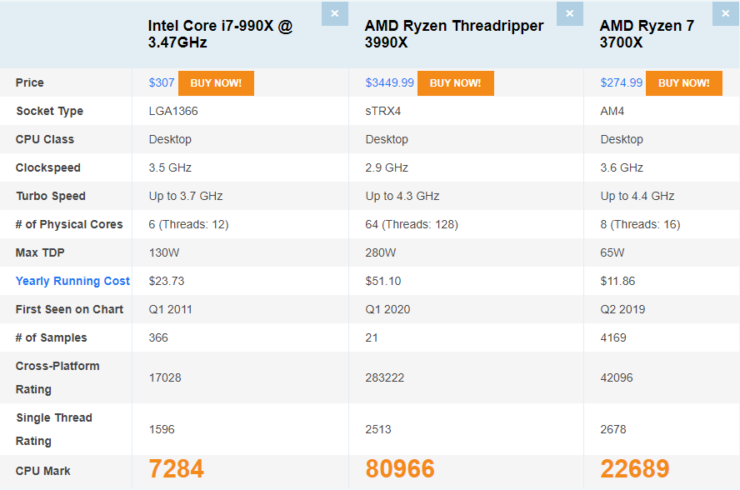 4) Smoking is Back — Electronically

One of the great public health achievements of the last two decades was reducing tobacco use in youth. According to a yearly survey conducted by the U.S. Department of Health & Human Services, in 2000 20.6% of 12th grade students regularly smoked while 14% of 10th graders admitted to the same; by 2011 that number had dropped to 10.7% of 12th graders and 5.5% of 10th graders. 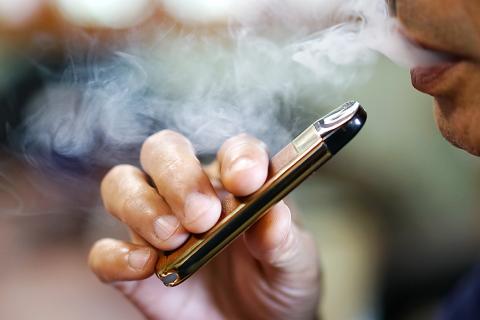 But progress has been stymied by the rise of e-cigarettes. First introduced into the US market in 2007, brands like Blu and Juul took off in the early parts of the 2010s.  According to the National Youth Tobacco Survey conducted by the FDA, youth e-cigarette use increased by 78% from 2017 to 2018. More than 1 of every 4 high school students (27.5%) reported in 2019 that they used electronic cigarettes in the past 30 days, per this survey, while only 5% of high school students said that they smoked cigarettes in the last 30 days — a decrease from 15.8% in 2011.

But this isn't just limited to youth. Studies by the FDA and the Department of Health & Human Services show that e-cigarettes usage has increased across all segments of society, effectively converting the majority of regular smokers into e-cigarette users.

Apple launched the first iPad on April 3, 2010. Months later the first Android tablets appeared with the Galaxy Tab being revealed to the world September 2010 at the IFA in Berlin. Then, with the launch of Android 4.1 Jelly Bean 2012, Google unveiled its first tablet, the Nexus 7, which was generally quite well received and pushed sales of the form factor to the stratosphere. 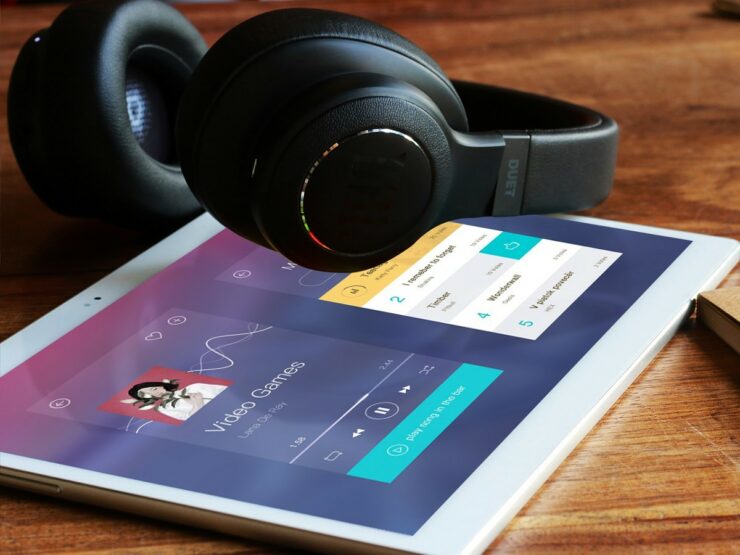 Billed as a new way to consume content, web developers rushed to make their websites tablet friendly. Publishers put out tablet versions of their magazines and newspapers, excited about being able to offer a media-rich version of their product and recoup a new revenue stream. In 2014, Gartner predicted that by 2018 more than half of all users will use a tablet or smartphone first — instead of a laptop or desktop — for all online activities.

But fast forward to 2020 and this prediction is far from becoming true. The only growth story in the market has been the introduction of Amazon's Kindle slates, as a way to consume content from the online giant. Per IDC, tablet shipments are down 18.2% year over year during the first quarter of 2020 accelerated by the ongoing Covid-19 pandemic. Market share, however, remained stable, with Apple still way ahead of any Android vendor. According to StatCounter, tablets hit their peak in September 2014 when they accounted for 6.8% of all traffic. Now, that number is 2.9%.

For publishers that bet big on tablets being the content and revenue source of the future, the pain has been immense. Canada's Toronto Star bet big on tablets, which cost the company $32.8 million, all for “between 55,000 and 60,000 readers” each week. A pittance to its usual weekly readership of 2 million. The app lasted less than two years, shutting its virtual doors in September 2017. Perhaps apropos to this failed investment, the Toronto Star was recently sold for $52 million — less than the value of its cash on hand.