Destruction is a fun thing to participate in, and can help to alleviate any boredom in space. Particularly in Elite: Dangerous. Destruction derbies are making their way back into the game via a mechanism that forgoes fines for all players involved, if everyone uses the mechanism.

Space demolition derbies make a comeback with a bang in Elite: Dangerous as Frontier Developments adds the ability to absolve participants of crimes or fines.

Apparently it was a common practice to just shoot at random unsuspecting players as they tried to dock or go about their business. As annoying as that seems, Frontier Developments started initiating a system of heavy fines that sought to prevent such behavior.

In protest to the harsher penalties, players then started a goat meme that filled the official Elite: Dangerous forums a well as Twitter with hilarious photos of goats or even of players ramming into stations and other players in protest, despite the high fines. 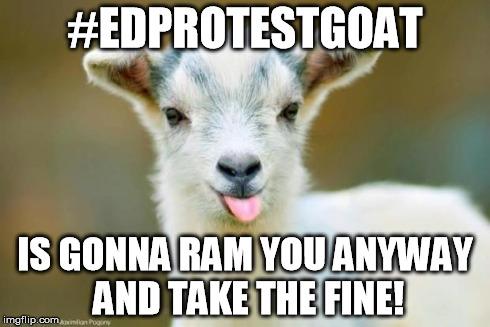 And what can you possibly do against a veritable army of cute goats telling you where to stick your new rules? Change, of course. Those fluffy capra aegagrus hircus photos have prompted Frontier Developments to actually implement some new changes.

Now they're going to be implementing a way so that those that want to race around and ram into each other a way to do so, so long as everyone gives consent.

"I'll need to check with some clever coder folk on this, but I'm hopeful that we can have this crime not squawked with "don't report crimes against me"," Sammarco wrote. "As long as all participants use this functionality then they would be safe to race near each other - though hitting spectators would still trigger the crime."

So, what have we learned from this? That goats are a great way to get people to change. But seriously, if there is enough of an outrage and enough benign yet hilarious activity that gets the outrage noticed, then sometimes change can occur. So long as the developer is reasonable, of course. And Frontier Developments has a track record of actually listening to its players.