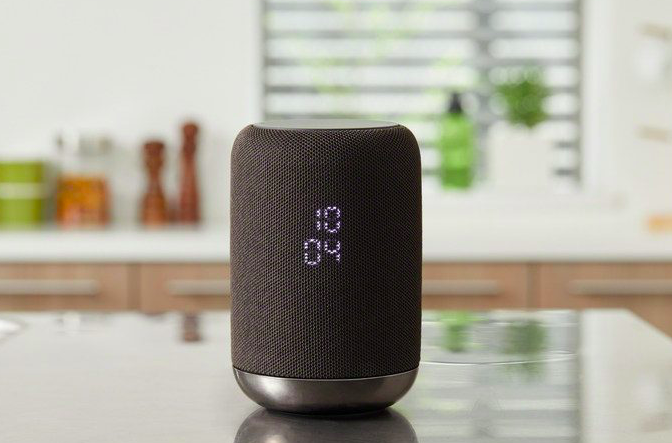 The smart speaker from Sony is named as Sony LF-S50G. It packs all the features that one gets on Google Home. One can use music streaming services like Spotify, Pandora, Google Play Music, and others on Sony LF-S50G. Besides, music streaming, users can also control smart home devices with their apps and also cast content to TV. Thanks to the Google Assistant integration, the Sony LF-S50G can also answer to your search queries along with reminders for events.

With the Sony LF-S50G, Sony is focusing on the audio quality. The speaker is geared with a vertical 360-degree two-way facing speaker that is claimed to “comfortably fill the average room with sound.” Besides, there is also a subwoofer onboard that offers bass to the sound. For Bluetooth pairing, there is NFC support on the device, and Sony has also added gesture controls for music playback. The Sony LF-S50G also has an IPX3 rating for splash resistance for the users who want to use it in the kitchen or other places that are prone to water splash.

Regarding the design and built, one thing that you will notice about the Sony LF-S50G is that it resembles Apple HomePod. Although Sony has launched the device ahead of Apple, the similarities can't be ignored. The pictures of Apple HomePod have been available for quite some time and could have inspired Sony to some extent. However, Sony's iteration of the design looks more compact, and it also features a small clock on the front, behind the mesh.

Sony will be putting the device on sale in October with the price tag of $199. For those who loved the HomePod design but didn't like its heavy pricing, Sony LF-S50G could be your closest alternative.